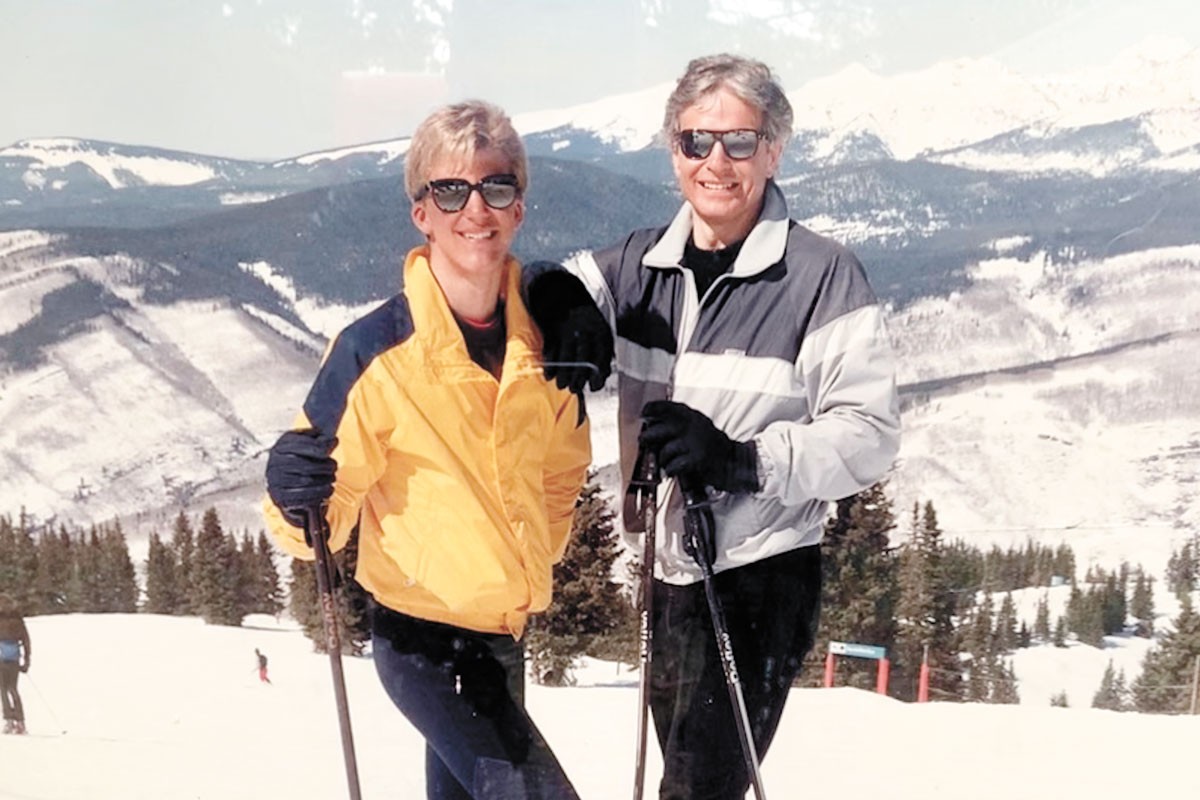 Courtesy of John Grollmus
Father and son skied in Vail in the mid-'80s.

My earliest memory of skiing is from age 4 when I was dropped off by my dad at a place called the Gingerbread House. Sitting wherever you are now and reading this you can't be blamed for thinking something along the lines of, "Man, being 4 and going to a place called the Gingerbread House must have been a dream come true." It's fair if you're picturing some quaint house in the woods run by a rosy-cheeked grandmotherly figure where the delicious smell of freshly baked cookies always hung in the air. However, the actual truth was nothing like that.

The place was something more like a very impersonal day care center where a couple of times a day we kids were forced outside into the freezing cold to slog uphill toting skis and gear only to be shoved back down that same hill by some nameless adult while we screamed in fear. This is, at least, how I remember it, although I'm fairly sure the reality was nowhere near that awful.

Somehow, miraculously it would seem, my next memories related to skiing are very positive. I recall pestering my dad relentlessly until he finally agreed to pack my mom, my sister and my now 6-year-old self into an embarrassingly bright yellow Volkswagen Dasher and drive us to the mountains. It's never quite clear to me what changed, but by this time skiing had gone from being an activity that inspired epic fear in me into one that inspired pure joy. There's a great picture of my family on the slopes from around this era where I seem to be about 4 feet shorter than even my slightly older sister, but what I lacked in stature, I made up for by the size of the gigantic grin on my face.

The decade or so that followed brought many changes to my family unit. My dad moved out of the house, then back in, and then back out for good. My sister eventually moved off to college, and somehow along the way my mom and I developed the habit of not being able to speak with each other in any form other than an argument. Throughout these years my dad seemed, to me at least, to have decided that I would never live up to his lofty expectations of me. However, even in this trying period of my life, whenever my dad and I would head for the slopes, all my problems and concerns seemed to simply fade away into the euphoria of skiing. 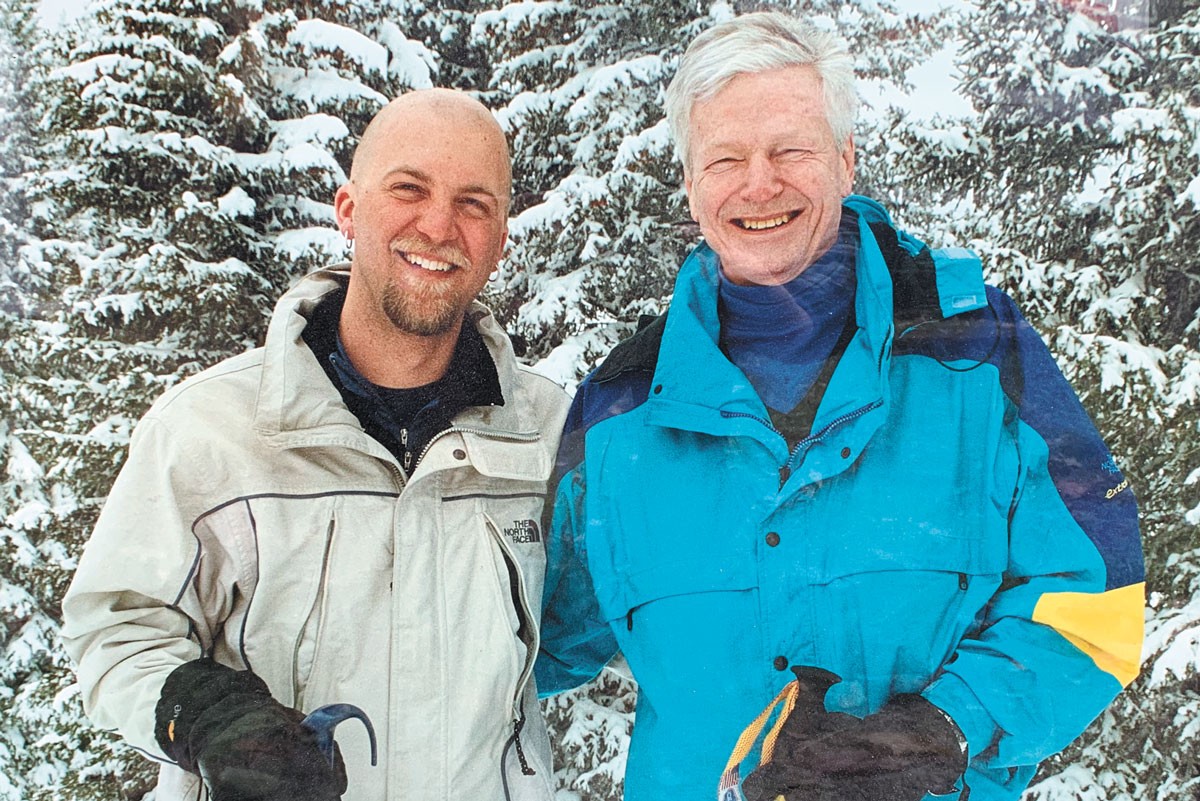 Courtesy of John Grollmus
Father and son back on a mountain.

As I grew into adulthood, ski trips with my dad would develop into quite the tradition. It all began with those childhood day trips into the mountains around home. During the day we'd carve up the slopes, and then we'd usually stop for a boys dinner on the way home. I can still vividly remember the Mexican restaurant, long since burned down, where we'd often stop and test our mettle by seeing who could eat the most of their famously hot four-alarm salsa. Later, when we lived far apart, we would meet up in some famous ski location like Colorado, Utah or British Columbia to keep the ski dream alive.

As the dynamic of our on-mountain experience changed and I became the better skier, we might separate for a while during the day so I could chase powder, or girls, or just try to get hurt by hucking myself off any available cliff, but toward the end of the ski day, we always came back together for an après ski beverage and maybe even some chips and salsa. It always felt like no matter how far we drifted apart both physically and mentally, a therapeutic ski trip always brought us back together, even if only for a short time.

As time wore on there was a particular trip that made me worry. I'd flown to California, near where my dad now lived, to meet up with him and ski the Tahoe area while we stayed at the ski house of one of his friends. He'd already been to the house and unloaded his stuff before he came to pick me up from my flight and on the return trip things took a turn for the worse.

He didn't seem to know where he'd actually come from and then began driving very erratically. I took over driving and called his wife who then talked me through getting us to the house. In the morning, things seemed to be back to normal, and our trip went on mostly without a hitch. However, I discussed the incident with my dad's wife and my sister who also happened to live near my dad. It wasn't too long after that I got the call to give me the news I'd been fearing: My dad had been diagnosed with a particularly cruel and fast-progressing form of Alzheimer's.

While he still had the mental capacity to do so, my dad convinced us all that what he really wanted, and perhaps even needed, was one last ski trip. This one, however, would present some interesting challenges.

My sister and I put a plan in motion. She would travel with him to be sure all went safely, and they would come to stay with me at my slope-side abode so we could reduce the number of variables while trying keep things going smoothly. When the morning finally arrived to get my dad out to ski, we awoke to a foreboding gray fog that had settled menacingly on the mountain. Out on the slopes things did not go well. Between the ever-increasing fog clouding my dad's head and the actual fog outside our goggles, he couldn't really do much.

A pattern quickly developed wherein he would make a turn and then almost sit down on the snow; I'd then pick him up and attempt to instill some confidence in him, and then he'd start out again only to quickly be back on the snow. This depressing cycle continued for longer than any of us really wanted it to, but we had to give him this one last shot. Finally, after a toboggan ride down from a particularly compassionate patroller, we found ourselves in the first aid room.

Have you ever watched a person with dementia try to pass concussion protocols? I can tell you from experience it doesn't go well, but with a quick explanation in a side conversation, we were able to secure our release and head home.

The rest of our time together that weekend went much better, but there was no avoiding the awful reality that my final ski trip with my dad was sadly in the rearview mirror.

A few years later, shortly after his unfortunately premature passing, I had a dream about my dad. In it I was visiting him at the assisted care facility where he'd spent his waning days, and a look of clarity I hadn't seen in years appeared on his face, followed by a sly smile. He suggested I sneak him out and we make a break for the one final and greatest ski trip of our lives.

Well, we did just that, and in classic dream sequence fashion, we were on the hill in no time. It was a particularly beautiful day with sunshine and powder in abundance. We made lap after lap in the sun, sharing stories and laughs about ski trips gone by as we rode the lifts.

Finally, as the sun began to dip low in the sky, we came to a ridge that I somehow seemed to know well. My dad took a turn onto a run of untouched powder sparkling with sun-kissed diamonds and I just stood there relishing the memories as I watched him ski away. ♦