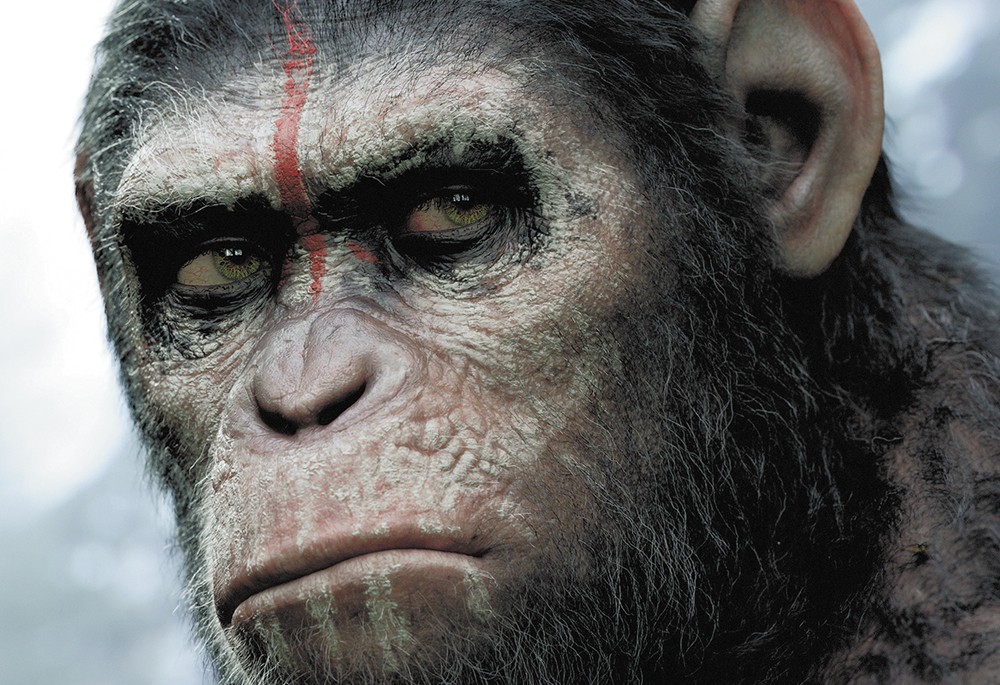 the ape-ocalypse witnessed in 2011's Rise of the Planet of the Apes — in which lab chimps imbued with heightened intelligence (as a result of their time spent as simian guinea pigs) freed themselves from their cages and headed across the San Francisco Bridge toward the California redwoods — we revisit these apes in the process of laying the groundwork for their new society.

The apes are now fully bipedal (no knuckle-dragging for this colony), and live in Anasazi-like dwellings, where English-language skills and philosophical teachings ("Ape not kill ape") are scratched onto the rock walls. In addition to monosyllabic English, the apes also speak in sign language, translated for viewers via subtitles — which may come as a surprise to those seeking mindless entertainment. Their leader, now as before, is Caesar (a combined marvel of computer imaging and motion-capture acting by Andy Serkis, who played Gollum and King Kong for Peter Jackson).

Dawn opens with a montage of news footage that explains how a simian flu epidemic has destroyed the human species. After observing the simians' new social order for a bit (an impressive feat of CGI technology), we learn that there are actually human survivors who have an inexplicable immunity to the pathogen that killed off most of their brethren. A human search party led by Malcolm (Jason Clarke) and his medic wife Ellie (Keri Russell) travels deep into the apes' forest territory to investigate the remains of a hydroelectric dam, with the hope of restoring electricity to the spartan human colonies back in San Francisco. A gun goes off, an ape dies, and rapprochement between the species falls to the cooler heads of Caesar and Malcolm.

The narrative and its attendant lessons about how one rotten ape and/or human can spoil the bunch are engaging, although I found myself drifting during the battle sequences. Call me a bigot or species-ist, but, to my eyes, most of these apes look alike — especially during chaotic action sequences. Also, the dulling of image brightness when wearing 3-D glasses exacerbates the overall blur of monkey mass. (This is a movie that should be totally fine to see in conventional 2-D.) Matt Reeves proves to have been a good choice to further this series, given his previous triumphs with the jangling creature feature Cloverfield and the unsettling story of adolescent bloodlust in Let Me In. Reeves knows how to eke pathos from CGI and heartbreak from teenaged vampires: He's perfect for this story about the beasts that lie within. ♦

Dawn of the Planet of the Apes is not showing in any theaters in the area.