If your job involves telling strangers the worst news they will ever hear, how can you be filled with anything but anger? 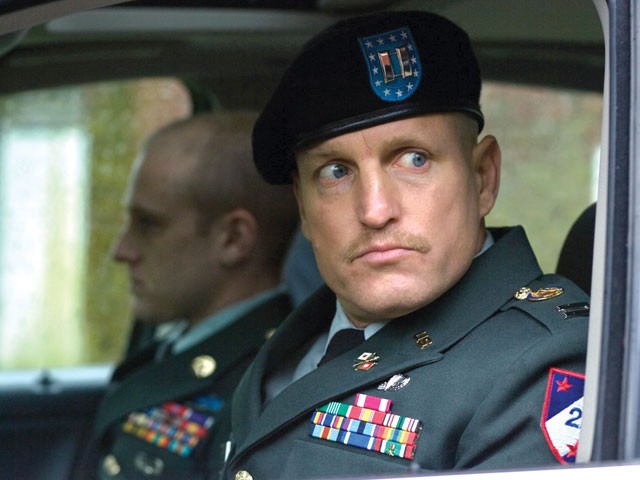 A civilian vehicle rolls slowly through a leafy neighborhood of military housing. Two uniformed soldiers emerge from the vehicle, knot their ties, straighten their berets. At a playground across the street, mothers turn away from their children, line up along a chain-link fence and stare. They know what two uniforms showing up on a front porch means.

“Could be worse,” mutters Woody Harrelson’s Captain Tony Scott. “Could be Christmas.”

For years, the American public was never shown the flag-draped coffins coming back from Iraq and Afghanistan. Even now, for those outside the military, does it really feel like we’re at war?

First-time director Oren Moverman — who has seen combat as an Israeli soldier — doesn’t allow us any such comforting distance. He rubs our sensitivities in what it’s like to open your door and find out that an IED has just exploded your son.

A pattern is established: Harrelson plays the older officer, more experienced in the daily business of delivering horrible news but less experienced in actual combat than Ben Foster’s soldier, who’s newly returned from Iraq and new to being a “casualty notification” messenger.

Each visit from the angels of death is like dreaming someone else’s nightmare. The impulse is to look away, but Moverman’s handheld camera insists that we stare at grief, at how people deny and scream, lash out and try to escape from the terrible news. And by improvising most of the notification scenes, Moverman fills them with raw emotion.

The script, by Moverman and Alessandro Camon, supplements the dreary parade of death notices with an account of Montgomery’s attempts to merge back into society (mostly angry, mostly failed) and to forge relationships (unsuccessful and incomplete). He’s distant with his fiancée (Jena Malone, Into the Wild) and tentative with a war widow (Samantha Morton, Minority Report, In America).

Somehow, despite his PTSD, Foster’s Montgomery struggles to fi nd a path toward compassion. And while Harrelson and Morton, both excellent, have collected the Oscar buzz, it’s Foster (Six Feet Under, Hostage) whose work is most affecting: the wavering eyelids, the little neck adjustments, the teeth bared in anger before he says things he’d rather not reveal. Montgomery wanders the late-night streets, comatose; just to work off his anger, he hurls darts past a dartboard and into his apartment’s stucco walls. Joking with his girlfriend or fellow officers, his bitter laugh turns into a sneer.

He was a hero in a war that left his life ruined. (And his vision. In a detail that’s meant to be symbolic but that’s just left hanging, combat trauma has blurred Montgomery’s eyesight.)

In a haunting scene, Morton’s Olivia Pitterson confronts the news of her husband’s combat death with skittery eyes, worried over-the-shoulder looks, and a pair of rote handshakes meant to console the soldiers who have arrived to console her. Montgomery senses another broken soul, and in their different ways, Olivia and Will are indeed coming off broken relationships; loneliness is painted on their faces. In a pair of scenes when Will is helping Olivia pack up her belongings, they restrain so much that it almost hurts to watch: the tentative slow dance, the sense that they shouldn’t be doing this, the wanting to do it anyway. Their mundane conversation — about cups of coffee, about making sure to shut the door firmly on your way out, it tends to stick — dances around their pain.

Moverman’s ending aims at being unresolved but instead falls fl at. It’s a rare misstep in a film that’s filled with death and offers, as consolation, mere glimpses of compassion. Scott and Montgomery will continue to be self-destructive: They’re still angry about war, about what it did to their buddies, about the news they have to inflict on the families they’re forced to visit.