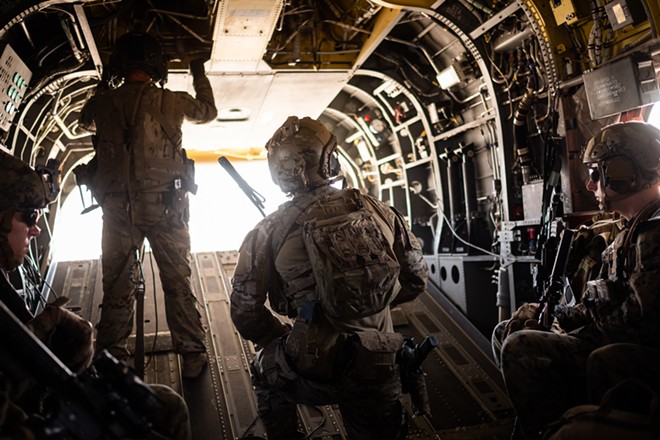 Jim Huylebroek/The New York Times
Members of the American military in a helicopter over Helmand province, Afghanistan, Sept. 26, 2019. United States intelligence officers and Special Operations forces in Afghanistan alerted their superiors as early as January to a suspected Russian plot to pay bounties to the Taliban to kill American troops in Afghanistan, according to officials briefed on the matter.
Charlie Savage, Mujib Mashal, Rukmini Callimachi, Eric Schmitt and Adam Goldman
The New York Times Company

U.S. officials intercepted electronic data showing large financial transfers from a bank account controlled by Russia’s military intelligence agency to a Taliban-linked account, which was among the evidence that supported their conclusion that Russia covertly offered bounties for killing U.S. and coalition troops in Afghanistan, according to three officials familiar with the intelligence.

Though the United States has accused Russia of providing general support to the Taliban before, analysts concluded from other intelligence that the transfers were most likely part of a bounty program that detainees described during interrogations. Investigators also identified by name numerous Afghans in a network linked to the suspected Russian operation, the officials said.

The intercepts bolstered the findings gleaned from the interrogations, helping reduce an earlier disagreement among intelligence analysts and agencies over the reliability of the detainees. The disclosures further undercut White House officials’ claim that the intelligence was too uncertain to brief President Donald Trump. In fact, the information was provided to him in his daily written brief in late February, two officials have said.

Afghan officials this week described a sequence of events that dovetails with the account of the intelligence. They said that several businessmen were arrested in Afghanistan over the past six months and are suspected of being part of a ring of middlemen who operated between the Russian intelligence agency, known as the GRU, and Taliban-linked militants.

On Monday, the administration invited several House Republicans to the White House to discuss the intelligence. That briefing focused on intelligence information that supported the conclusion that Russia was running a covert bounty operation and other information that did not support it, according to two people familiar with the meeting.

Both people said the intent of the briefing seemed to be to make the point that the intelligence on the suspected Russian bounty plot was not clear cut.

Democrats and Senate Republicans were also separately briefed at the White House on Tuesday. Democrats emerged saying that the issue was clearly not, as Trump has suggested, a “hoax.”

“I find it inexplicable in light of these very public allegations that the president hasn’t come before the country and assured the American people that he will get to the bottom of whether Russia is putting bounties on American troops and that he will do everything in his power to make sure that we protect American troops,” said Rep. Adam Schiff, D-Calif.