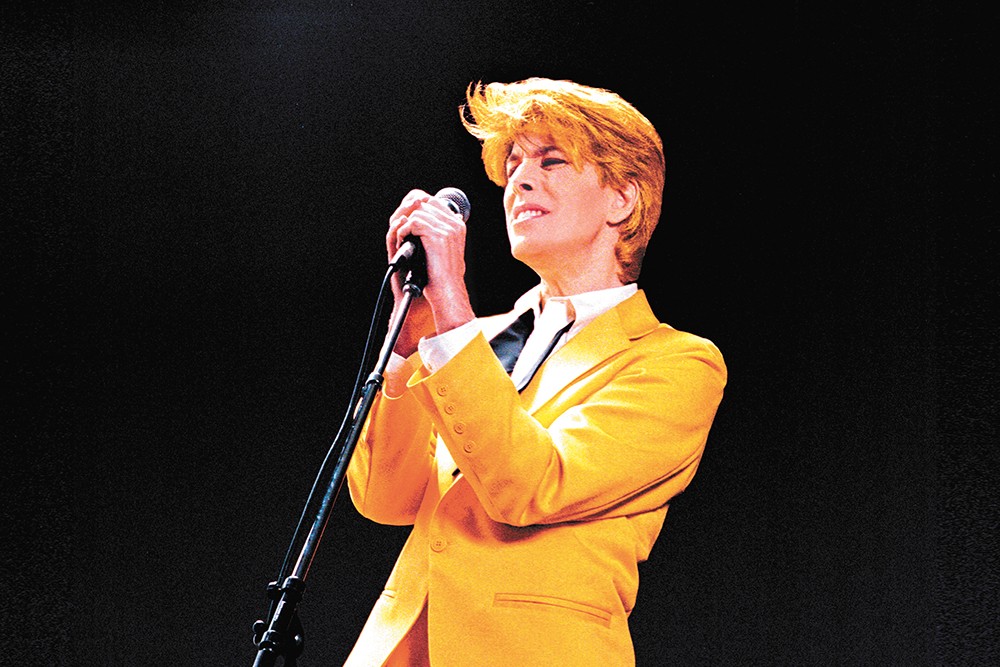 His first stint as an impersonator was playing George Harrison in a touring Fab Four tribute act, and he decided to trade in his Beatle wigs for sequined bodysuits in 2001. Brighton's tribute to the Thin White Duke has him traveling all over the country, and this weekend he makes his way to Spokane for a Bowie retrospective with the symphony.

Brighton spoke to the Inlander before his Inland Northwest stop, discussing Bowie's legacy, the fine art of impersonation and what it was like to work alongside the man himself. Responses have been edited for clarity.

INLANDER: You've twice performed as iconic rockers — first as George Harrison and now as Bowie. What's the process of disappearing into another artist?

BRIGHTON: You study every piece of footage you can find. You read everything you can find. You look at every photograph and listen to every recording. And you practice. It takes years to assimilate a character and actually become reminiscent of a person, and you have to choose a character that you have some sort of physical resemblance to. But beyond that you've got to learn their mannerisms and their vocal stylings, the way they speak. It's an insane amount of work.

What was your relationship with Bowie and his music before you started playing him?

He was always one of my favorite artists. I've listened to him since I was a kid. I remember the first time I heard one of his songs on the radio, and I had never heard anything like that. His writing and his performance, everything about him was so individual and unique and sort of haunting, and I'm intrigued by his brilliance still.

In your studies of Bowie, was there anything you learned about him that most surprised you?

I had the honor and privilege of doing a television commercial with him a number of years back. I was hired to dress up in his earlier personas, while he appeared as he did at the time. And while working with him on set, he was quite the comedian. He pulled out a whole repertoire of performance skills off camera that no one there even realized he had in his arsenal. He was whipping out comedy bits and impersonations of people. Another thing is, we were watching a take on the video screen, and the director said to him, "Can you do that again?" And Bowie says, "Yeah, I've got a photographic memory," and he did it again exactly. An insane talent, just unbelievable.

It was terrifying to be impersonating someone with them watching, and it was also very flattering and validating. He thought I was worthy to do this, so of course there are these contradicting thoughts going through my head. But he was very much the perfect English gentleman, just stuck out his hand with a big smile on his face and said, "Hi, I'm David." I went back to being a high school kid again.

Since Bowie died, how have audience responses changed? It must have been a seismic shift for you.

Huge. Enormous. In fact, we had a show only days after he passed; we'd already had it booked. His fans showed up wearing all sorts of different Bowie costumes, and people are crying. It was cathartic and healing, but also very difficult. We managed to get through the show and hold it together. We were working before he passed, but human nature is such that when we lose something, we tend to value it more. Things got so busy that we couldn't keep up with the demand. And expectations from the audience are different. Some people viewed it as cashing in, which, of course, it wasn't — we had been doing it for years. And Bowie himself was more than generous with us. So that was a tough pill to swallow. We try to treat his legacy with as much respect and honor as possible.

So many artists have come and gone, but why do you think Bowie has remained so relevant and beloved by people?

I think the strength of his art is up there with anyone. I've always said that he's one of the few solo artists talented enough to have been a Beatle. John Lennon used to say, "I can't believe he goes on stage and does all that." But it was the quality of his songwriting and his bravery, to step out and do something completely different from what he was doing. Not everything he did maybe worked, but enough of it worked so well that he created new genres. For decades, practically everyone in show business was imitating him.

What's it like to perform these songs with the full symphonic backing?

It's simply amazing to hear everything being played to perfection and having a real orchestra instead of synthesizers. Synthesizers are wonderful, don't get me wrong, but having the real instruments is incredibly magical. ♦