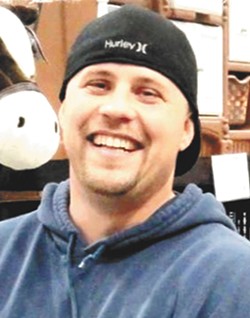 A registered nurse with the Spokane County Jail appears to have violated protocols when she did not order hospital care for a diabetic inmate who later grappled with corrections deputies and died in a restraint chair last February.

During a prolonged struggle detailed in newly released records, jail deputies tasered Christopher J. Parker twice and later pushed his head down into his lap as they strapped him into the restraint chair. As he was doubled-over in the chair, he lost consciousness and died.

Parker, 33, had called 911 in the early morning hours of Feb. 24, seeking help after ingesting methamphetamine and becoming disoriented in Browne's Addition. A Spokane police officer described him as somewhat coherent, but acting paranoid and lost.

"Parker then said that he is a diabetic and might be having some problems with that," the officer reports. "I requested medics to check him out."

A Spokane Fire Department ambulance crew measured Parker's blood sugar at 250 milligrams per deciliter, above normal, but within a common range for a diabetic. Despite his elevated blood sugar readings, Parker was booked into the county jail on a warrant for late child support.

County Detention Services Director John McGrath says the Spokane jail medical staff considers 70 to 110 mg/dL to be the normal range for blood sugar, but can treat inmates with blood sugar up to 400 mg/dL. He says the jail has a "long-term" policy requiring hospital care for anyone above that threshold.

"If their blood sugar is over 400," McGrath says, "we're taking them to the hospital."

When Parker checked into the jail shortly after 4 am, registered nurse Kerrie Fernlund measured his blood sugar at 416 mg/dL. Records indicate the nurse described Parker's blood as "maple syrup," encouraging him to take several units of insulin to lower his levels.

"Fernlund kept offering the insulin, but Parker continued to refuse," investigators report. Fernlund, a jail nurse for three years who had been awake for nearly 24 hours at this point, according to her statement, moved on to other duties, planning to check back later.

Fellow inmates described Parker as restless or paranoid. He paced around the holding tank. Less than an hour later, he was taken out for processing and he continued to fidget, rubbing his short-cropped hair and glancing around. When corrections deputies went to put him back into a cell, he tensed up and became "uncooperative."

Corrections Deputy Sandy Rief told investigators they tried to place him in an isolation cell at the end of the hall when he "turned on" them.

Deputies told investigators Parker demonstrated extraordinary strength; at one point Rief reports, "Parker managed to grab the door frame and was pulling himself literally toward the door with all three deputies on top of him."

During the struggle, Deputy Timothy Wirun fired his Taser, striking Parker in the side, investigators report. Parker reached back and pulled out the wires and Wirun jabbed the Taser against Parker, using a "drive stun" to deliver a second brief shock.

Deputy William Miller reports the deputies managed to get a restraint belt around Parker's legs. They then "half dragged, half carried" him into the hallway. Parker continued to buck and thrash as they muscled him into the restraint chair and struggled to strap in his legs.

"[Parker] was pushing his hips forward," investigators report. "This caused Miller to push his head down into his lap to keep him from making these violent moves and stop that action."

Nurse Fernlund, who returned during the struggle, says she immediately had deputies sit up Parker, who had lost consciousness, and put an oxygen mask on him. She told investigators she decided to keep Parker in the chair for officer safety while they called 911. Parker soon went into cardiac arrest.

Due to miscommunication between the jail and dispatchers, AMR ambulance crews took more than 10 minutes to respond. Medics and deputies performed CPR on Parker for nearly 20 minutes before pronouncing him dead.

The Spokane County Medical Examiner later determined the cause of death to be a combination of three factors: methamphetamine toxicity, along with his diabetes and the physiological stress of being forced into restraints. Manner of death was listed as homicide.

The autopsy report shows Parker's blood sugar had spiked to more than 2,000 mg/dL, about 20 times the normal level.

With the investigation now closed, the case remains with the Spokane County Prosecutor's Office to determine if there was any wrongdoing. McGrath says he plans to launch an internal investigation of the incident after the prosecutor releases a decision.

Multiple attorneys have filed notices on behalf of surviving family members, setting the stage for potential litigation in the future.

When asked by investigators if they witnessed any inappropriate actions, Fernlund and deputies all answer no. Fernlund told investigators Parker was flailing out of control and fighting all attempts to help.

"Once he was in the chair, he repeated the statement, 'Just kill me,'" Fernlund reports. She also recalled him saying something to the effect of, "'How do you justify doing this because I didn't make child support?'"♦