As A Song of Ice and Fire author George R.R. Martin visits Spokane, we offer him some suggestions for the series' ending 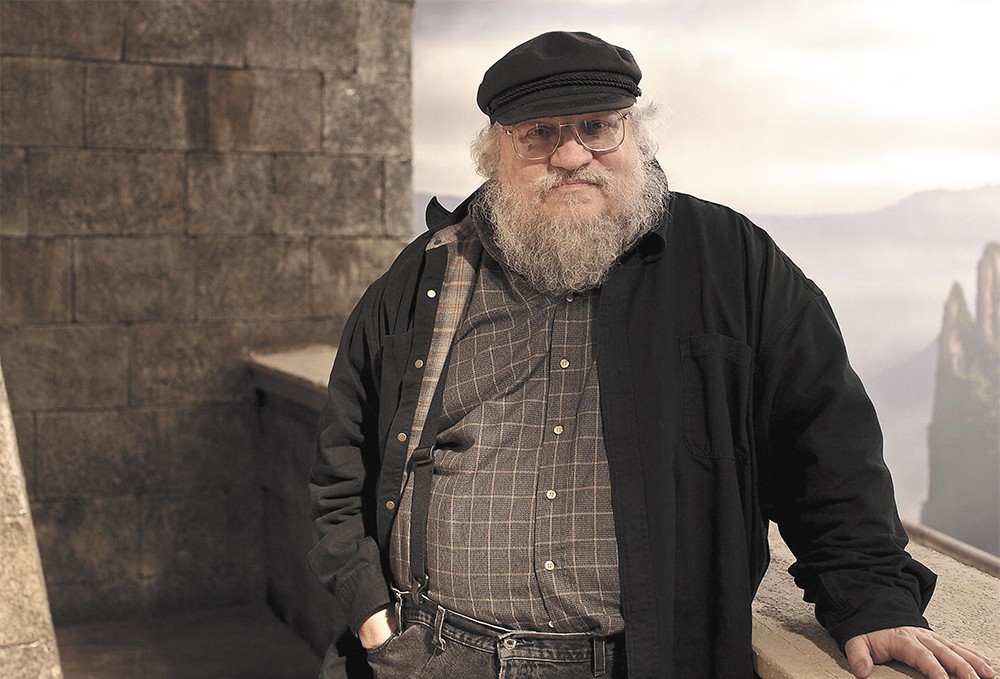 In what he'd probably hoped would have been in inconspicuous fashion,

one of the most buzzed-about writers in all of literature is coming to Spokane. George R.R. Martin is one of the many guests at this year's World Science Fiction Convention — also known as Worldcon, but going by the name Sasquan for this year's inception (Spokane + sasquatch), taking place Aug. 19-23 at the Spokane Convention Center. During his time at the con, Martin is scheduled to read an excerpt from The Winds of Winter, the forthcoming sixth novel in the A Song of Ice and Fire series. He'll also host an autograph session and participate in a few panels.

While Auntie's Bookstore has launched a social media campaign asking Martin's fans to encourage him to visit the store in person, here at the Inlander we thought we'd also do our part to leave a local impression on the author. So several of us on staff who are fans of Martin's series and HBO's Game of Thrones decided to give him some free, unsolicited advice on how he could wrap up the series. If you do use any of these ideas, Mr. Martin, a shoutout on Twitter would be nice.

War of the Wargs

Jon wargs into his wolf before death sets in — no resurrection theories here, sorry! WolfJon heads South to round up his sister Nymeria, Arya's missing direwolf whose giant wolf pack is terrorizing the Riverlands. They amass a wolf army and start to head North.

Arya, now the most badass assassin of all time, returns to Westeros to finish her "list." She is reunited with WolfJon and uses her warg powers to control Nymeria. Sansa finally becomes the powerful player that Littlefinger groomed her to be, and gleefully murders everyone who ever wronged her.

Dany and Tyrion have regained control of the dragons and invade Westeros, only to find it's already under attack from the north. They meet up with WolfJon and Arya, and Jon wargs into a dragon! Dany and Tyrion ride the other two dragons, and become the "Dragon with Three Heads." They lead a giant, powerful army north to fight the White Walkers/Others. After the threat from the north is reduced to smoking rubble, Dany marries Tyrion and rules Westeros with DragonJon by her side. Everyone who's still alive (practically nobody) lives happily ever after. I know. This is all too happy to really happen, but I can dream, can't I? (ALISSIA BLACKWOOD MEAD)

No way — Jon Snow is not gone for good. We'll leave it up to you, Mr. Martin, as to how to explain this twist (since we think you already have plans to do so), but he's coming back in a big way. Word eventually makes it to Essos that the White Walkers/Others are prepping their undead army to overtake the Wall and basically all of Westeros. Dany (obviously) gets herself out of whatever trap she's currently in regarding both the Dothraki and the Sons of the Harpy — let's just say Drogon saves the day! The Dothraki realize who she is when Drogon swoops in, and the roving khalasar pledge their loyalty to Dany.

Next, she and Tyrion flee Meereen with the dragons and those left who are still loyal to Dany. They head to Dragonstone, which is currently uninhabited save for the women and children left behind when Stannis and his army sailed for the Wall. With help from Ser Jorah, Daario and Varys, Tyrion and Dany are able to mount their long hoped for attack on King's Landing. As they're setting off from Dragonstone, an army of ships approaches in the mist... captained by none other than Jon Snow, and crewed by some rather icy-looking beings. (CHEY SCOTT)

Sweet George R.R. Martin has chosen to gift Spokane with his sea captain-esque presence rather than toiling away on the final books of his beloved Game of Thrones series. Though he's not making bank for his appearance at Sasquan, he needs to be at home writing! Of course, I have my own theory as to why he's stalling; he knows his ending will upset us all too much.

Martin has admitted there's a J.R.R. Tolkien influence (and let's be honest, what fantasy writer can't say that?) but I can't imagine Martin's work ending anything like the Lord of the Rings trilogy. There's already been too much death. In book one our hero dies; book three sees the devastating "Red Wedding." Along the way, more creative deaths and destruction. Now our beloved Jon Snow's life hangs in the balance. Will there be anyone left to root for? Probably not. Instead, this author is less inspired by Tolkien and more by Shakespeare. Like Hamlet, Game of Thrones will end in one final, guts-filled bloodbath scene where nearly everyone left will die, die, die around the Iron Throne. It's not the ending any fan wants or deserves, but it's the one Martin will certainly offer. (LAURA JOHNSON)

In the final novel, An End of Books, the Seven Kingdoms have fallen. The White Walkers and their hordes are breaking through the gates of King's Landing. A power-mad Daenerys Targaryen rides atop her dragon, uncreatively named Drogon, laying siege to the city. Those few others left alive are in the throne room. Tyrion Lannister. Sansa Stark. Jon Snow, reanimated by the spirit of a god. Five people we've never met before, which the book spends most of its time talking about. A naked chick who's, like, really hot, especially for the time. The survivors break off swords from the Iron Throne and prepare to make their final stand. They realize that perhaps it's not victory that's important. It's the fight. That if nothing they do matters, then all that matters is what they do. In an inspiring, defiant speech, Tyrion delivers a monologue that goes on for 30 pages, about all the different families and houses and who beget whom and Dornish wine and lavish banquet food. Sansa sings a mournful song, touching upon themes of ice, yes, but also fire.

And then Tyrion, tossing his dagger — the damn thing that started all this mess — back and forth in his hands, looks up at Drogon.

"Well, personally, I kinda wanna slay the dragon," he quips. Drogon roars, unleashing a gout of fire. "Let's get to work." (DANIEL WALTERS)♦

Fans of all ages and loyalties have converged upon the Lilac City through this weekend to celebrate and share their enthusiasm for the all-encompassing science fiction and fantasy genre. Sasquan, the 73rd annual World Science Fiction Convention, takes over the Spokane Convention Center for five days, Aug. 19-23, and features panels, parties, presentations and many other activities. A link to the full schedule of events can be found at sasquan.org, and a quick scroll-through offers a glimpse at Sasquan's diversity of programming: Klingon language workshops, Furry meetups, author coffee talks (kaffee klatches), writing, acting and costume workshops.

Locals can attend Sasquan by purchasing full- ($105 to $240) or day-rate memberships ($15 to $70), but many events are set to take place outside of the convention grounds, like casual "room parties" with Con attendees and the daily, themed (Doctor Who, Firefly, anime, Star Trek) Sasquan Processions through Riverfront Park.

A major, annual highlight of Worldcon is the presentation of the Hugo Awards (on Saturday, Aug. 22), an honored accolade for creators of literature, film, television and other related works in the sci-fi realm. But this year, a rather notorious name could be capturing more than one win: Noah Ward. (Say it slowly — what else do you hear? Perhaps "no award?) That's because this year's Hugos have, for months, been embroiled in a controversy that concerns two groups called the Sad Puppies and the Rabid Puppies.

The groups proposed that voters in the Hugos — anyone who holds an active membership in the World Science Fiction Society — submit a specified slate of authors compiled by the Puppies. In doing so, the Puppies managed to push their nominations through to the final round of voting. But beyond gaming the Hugos, the controversy is centered on some of the ideologies held by the authors who landed on that final list. Critics of the Sad Puppies contend they're trying to shine the Hugos' spotlight away from any works that embrace diversity and acceptance of nontraditional ideas, lifestyles or beliefs.

"What [the Puppies] did was not against our rules," remarks Tom Whitmore, spokesman for Sasquan. "It's to some extent against the social norms, but that's not enforceable in some way. And our stand is that we're not planning to favor either side; we're going to treat everyone with respect. And as for what the voters do, we have no control over that."

But, he adds, Sasquan has a zero-toleration policy for harassment. Already, convention organizers have dealt with harassment threats from one attendee toward another due to the tensions surrounding the Hugos.

Despite the shadow of Puppygate, Whitmore and other organizers are optimistic that Sasquan will be a memorable event for attendees from all over the world, and for its host city. — CHEY SCOTT