Deaths in the Family

Students, teachers and administrators are grieving after five suicides in Spokane schools — and uniting to find a solution 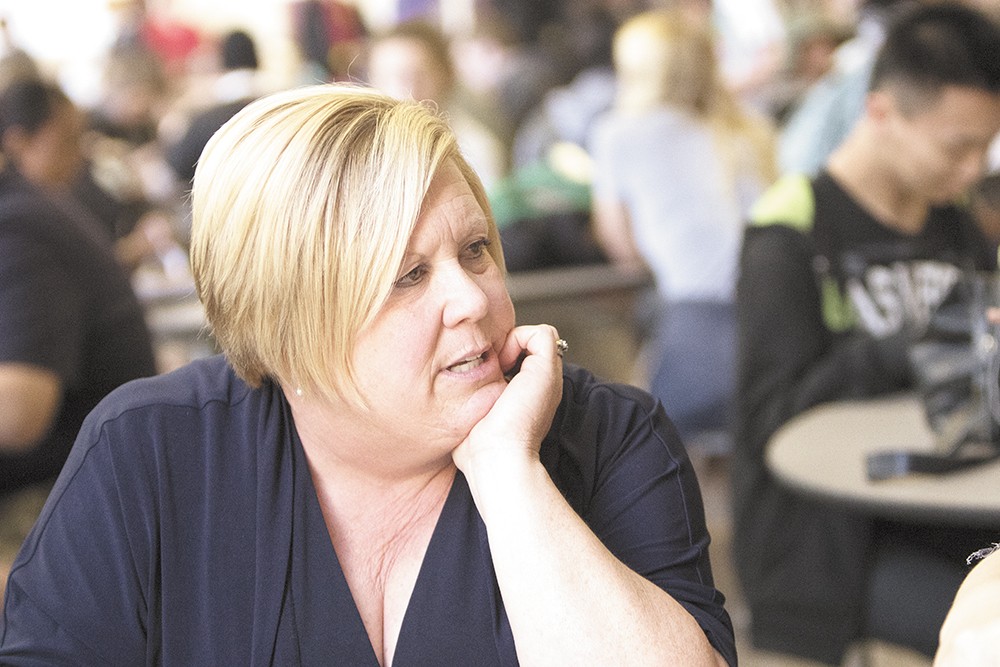 Young Kwak
Rogers High School Principal Lori Wyborney was shaken by last week's suicide, but is proud of the way her students have responded.

last week when she got a call on her Bluetooth.

"At that moment, you get a phone call, everything on your schedule drops," says Bleecker, director of Student Support Services for Spokane Public Schools. "You know that you're going to be late to something, and it doesn't matter anymore."

A student at Rogers High School had committed suicide on May 2. It was the fifth suicide in the district during this school year. The day before, Superintendent Shelley Redinger had posted an open Facebook message on the district page: "These recent losses should make us all aware of the threads that bind us together in our interactions with our students every minute of every day."

The sudden barrage of suicides — all of which appear to be unconnected — has left parents, students and staff reeling. It's also caused the community, searching for answers and grasping for solutions, to draw closer together.

A district in crisis

When a student dies, whether from an accident, a suicide or an illness, the district's crisis teams — consisting of counselors, therapists, psychologists, nurses and administrators — respond. In the most recent case, district psychologist Dave Crump contacted Frontier Behavioral Health to bring a mental health professional directly to Rogers. By 9 am, the entire team was in place.

"We knew that there had been a number of other kids who've experienced suicide in their families," Bleecker says. "And we also know there were kids expressing suicidal thoughts previous to this."

An email went out to teachers.

"I prepared a statement for them to read to students," Rogers Principal Lori Wyborney says. "Basically, we lost a student over the weekend, and we're really saddened by this. And we have dozens of extra counselors here, to assist us as students process this."

Seeing the empty chair where their classmate once sat can be especially difficult. A counselor follows the class schedule of the suicide victim, ready to assist struggling students. Rogers students who needed to leave class to go talk to a counselor were escorted by student leaders.

"We don't let kids walk down by themselves," Wyborney says. "That's how they end up crying in a corner."

Suicide in a digital age

In the aftermath of a student suicide, the school district faces a number of dilemmas: How do they balance sharing accurate information with student privacy? How do they honor the student's life without glorifying their death?

At Shadle, students gathered around sheets of butcher paper in the auditorium, writing messages and memories to be delivered to the parent of the deceased. Some students have wanted to create more extensive memorials.

"At one of the schools the kids were upset that we wouldn't let them decorate lockers," Crump says. "And the kids didn't understand that."

The district worries about "contagion" — that the attention and grief surrounding one student suicide can trigger another. It's why the local news media has been comparatively silent about the suicides. But these students don't get their news from TV or the daily newspaper. They get it from each other, through Facebook, Snapchat and Instagram.

The walls that separate one school from another no longer exist. North Central is the one traditional high school in the district that has not had a suicide this year: But even North Central students have felt the sting. NC junior Zanna Mika says she was Facebook friends with every single one of the district's students who committed suicide.

Mika would be in class and the news of another suicide would pop up on her phone. She'd be "heartbroken," unable to concentrate for the rest of the day. False rumors abounded. But in many ways, the district is handcuffed, unable to freely counter the rumors. They want to follow privacy laws and be sensitive to grieving parents. And the district is careful to wait for the medical examiner before calling a death a suicide.

"Some of us are wrestling culturally, as a district and a larger community, with what is an appropriate level of response," Community Relations Director Kevin Morrison says.

Social media can serve another role: The moment the district hears of a student death, Morrison begins digging through social media. He looks for clues to help explain the tragedy. In these cases, such explanations have remained elusive. On Facebook, parents have wondered if bullying played a role, but the district has no evidence to suggest that any of the students were bullied.

Morrison combs through photo captions and comment threads, making a list of the close friends of the deceased, to forward to counselors. "Who's around this person?" Morrison investigates. "We know statistically those students are going to be very vulnerable."

Leaning on each other

The crisis team members, too, are vulnerable. Even Crump, who's been a clinical psychologist for decades, feels the weight of a year like this. "I go home and I hug my kids more. And I'm more grateful," Crump says. "And to be honest with you, I've shed my tears."

Many of them are parents, and they imagine what it would be like to lose one of their kids.

When Wyborney, the Rogers principal, went home at the end of that terrible day, she made a point to talk to her 18-year old son. "Seriously, son, we need to know where you're at," she told him. "If you're so upset, and no one is hearing you, we need to hear that."

In 2008, two suicides devastated the Rogers student body. There was "an anxiety level in the school that was like fingernails on a chalkboard," Wyborney says. The worst fights she'd ever seen broke out. All that preexisting trauma, the feelings of fear, anxiety and depression, were brought to light.

This year is different. "Our students are responding in a more caring manner," Wyborney says. "We had a lot of students come down and say, 'I think this student's in trouble, I think you need to talk to them.' We've been able to intervene with students we might not have seen."

On an evening at the end of April, 200 students, staff and community members gathered in the North Central auditorium. Parents who'd lost a child to suicide stood up and shared their stories. Crump and outside mental health experts talked about how to spot warning signs, ask the right questions and find community resources. Similar forums will be held later this month at other high schools.

This year, there's a desire for reform. "I hope the district will pay for more counselors," Wyborney says. "I need mental health [workers]. I need social workers. I need community advocates."

The district is considering teaching more about suicide prevention. Already, North Central is recruiting 30 students to take part in a "Youth Mental Health First Aid Training" pilot. Those students will learn the basics of mental health, communication tools and the best way to intervene in a crisis.

As North Central Principal Steve Fisk says: "I think it's really fair to say that students are right now on the front line." ♦