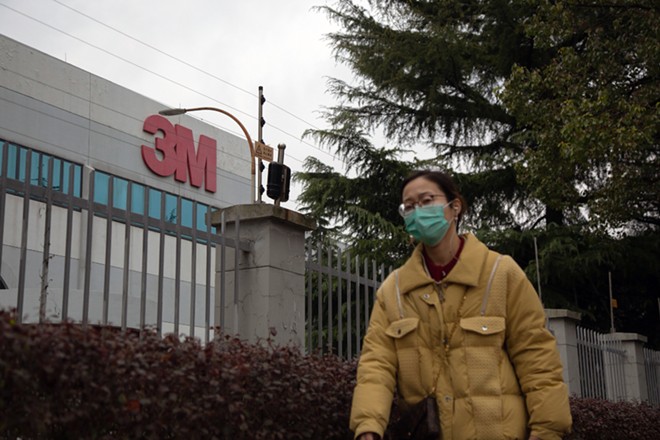 Henri Shi/The New York Times
A 3M factory in Shanghai, China, on March 10, 2020. The Trump administration is seeking to use powers under a Korean War-era law to cut off 3M’s ability to export surgical masks abroad and to claim more of the masks the Minneapolis company manufactures in other countries for use in the United States.

WASHINGTON — President Donald Trump said on Friday that the Centers for Disease Control and Prevention was urging all Americans to wear a mask when they leave their homes, but he immediately undercut the message by repeatedly calling the recommendation voluntary and promising that he would not wear one himself.

“With the masks, it is going to be really a voluntary thing,” the president said at the beginning of the daily coronavirus briefing at the White House. “You can do it. You don’t have to do it. I am choosing not to do it. But some people may want to do it, and that’s OK. It may be good. Probably will — they’re making a recommendation. It’s only a recommendation, it’s voluntary.”

“Wearing a face mask as I greet presidents, prime ministers, dictators, kings, queens — I don’t know,” he added. “Somehow, I don’t see it for myself.”

Trump’s announcement, followed by his quick dismissal, was a remarkable public display of the intense debate that has played out inside the West Wing over the past several days as a divided administration argued about whether to request such a drastic change in Americans’ social behavior.

“For anyone, particularly the president of the United States, to ignore recommendations from the CDC is not only irresponsible but selfish,” Choi said.

The president’s remarks came during a particularly contentious briefing where Trump insulted reporters, jousted with members of his own administration and returned to pugilistic form after several days in which he appeared to grasp the grim implications of a virus that could kill hundreds of thousands of Americans.

Trump again dismissed the recommendation of Dr. Anthony Fauci, the director of the National Institute of Allergy and Infectious Diseases, for a national stay-at-home order, saying he would leave such demands to the governors.

Senior officials at the CDC have been pushing the president for days to advise everyone — even people who appear to be healthy — to wear a mask or a scarf that covers their mouth and nose when shopping at the grocery store or while in other public places.