Short-term lenders are facing new regulations across the country. Idaho could be next 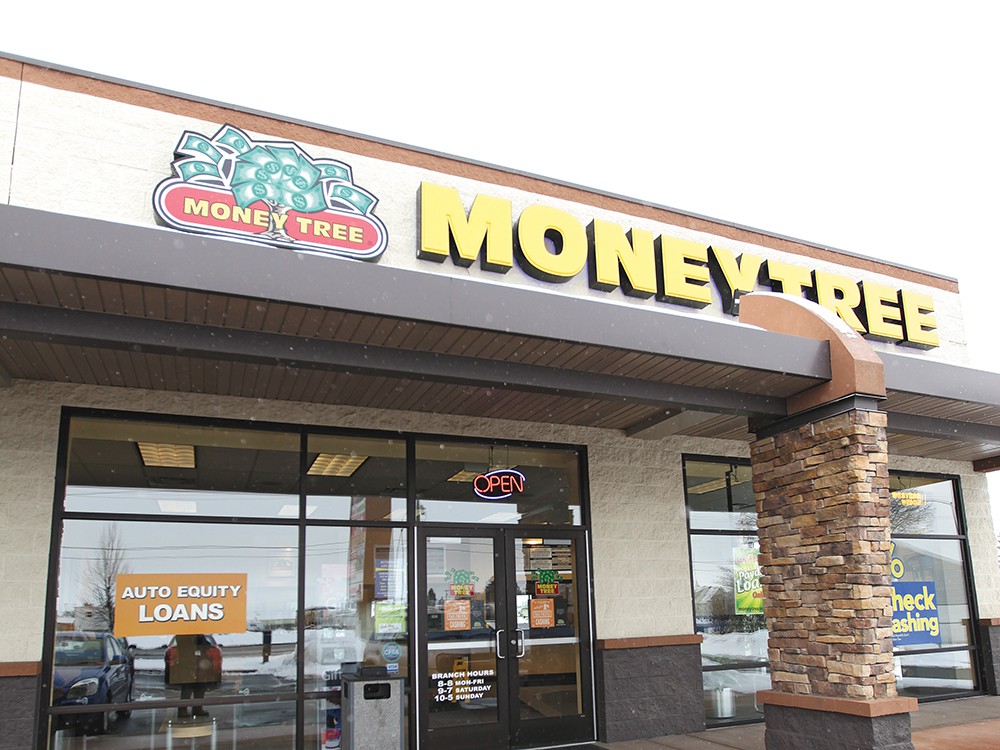 Young Kwak
Moneytree has branches throughout the Northwest, including Post Falls and Coeur d\'Alene.

In a sunny backyard, kids are running through a sprinkler and snacking on watermelon. Inside, two young women with big toothy smiles stand in the kitchen as a voiceover chimes in.

“When we were trying to make ends meet last month, family came to rescue,” the woman’s voice says. “My sister told me she went to Moneytree for a payday loan to cover unexpected costs. It couldn’t be easier.”

The exchange is part of an ad for Moneytree, one of the region’s biggest payday lenders, which could soon see its operations in Idaho dwindle.

Indeed, payday loans are easy to get — most people qualify with a check stub. That makes them attractive for many low-income people, but also drops them squarely inside a fight over whether the service is usury or necessity. In recent years, the debate over payday loans and the fees that come along with them has flared across the nation. States set their own regulations for payday lenders, and they’ve found plenty of ways to handle it. Today, at least 15 states cap interest rates — Georgia has one of the lowest, at 16 percent annually — while others, including Washington, limit the number of these loans a person can take out each year.

Next door, Idaho has no interest rate or loans-per-year ceilings. Moneytree charges $16.50 on a two-week $100 loan — the equivalent of 430 percent annually — and most other short-term lenders in the state charge a similar rate.

At least one state senator is looking to change that. Sen. Lee Heider, R-Twin Falls, says he’s working on a bill that would require all short-term lenders to outline the terms of loans to borrowers, and place a 36-percent cap on annual interest rates for payday loans. (Heider says he hasn’t finalized all the bill language, so he may reconsider, but 36 percent is his favored figure now.) He helped sponsor a similar bill last year, but that effort never made it out of committee. Rep. Elaine Smith, D-Pocatello, who co-sponsored it, says she got pushback from banks who worried they’d get caught up in new regulations. Meanwhile, payday lenders continue to fight caps like this because they say it limits their profits too much to stay in business.

“This is a problem, and it’s a problem for the poorest among us,” Heider says. “I can’t imagine borrowing money at 36 percent. I think I’m being more than generous [to lenders].”

Moneytree CEO Dennis Bassford doesn’t see his industry as a threat to the poor, but as a savior. Short-term loans are designed to help those who don’t qualify for traditional bank loans and who have no safety net of family or friends from whom to borrow, Bassford says.

The executive has raised eyebrows with his surly attitude, but also with his philanthropy and his company’s spot on Seattle Business Magazine’s “best companies to work for” list. A call to the Post Falls branch gets you a friendly greeting that ends with, “How can I provide you with outstanding service today?” although all media calls have to go through the corporate office.

“It’s a great industry,” Bassford says. “Our customers love the service we provide them. It’s a great business to be in because people value what we do.”

To Bassford, there’s no need to wonder about potential impacts of a 36-percent cap in Idaho. Under those rules, he could only charge borrowers $1.40 every two weeks on a $100 loan. That, he says, would destroy his bottom line and his ability to pay employees or basic expenses.

“It’s real easy,” he says. “Everybody who’s licensed in the state of Idaho, like my company, would close our doors and go out of business.”

While the industry doesn’t deny the high interest rates it charges, representatives say it’s not fair to measure them by year because these loans were never meant to be used in the long-term. But advocates argue intent is irrelevant. About 12 million adults use payday loans each year, and they are disproportionately poor and not well-educated, according a study by the Pew Charitable Trusts, the nonprofit that runs the Pew Research Center. Of more than 30,000 borrowers surveyed, 85 percent had no college degree and about three-quarters made less than $40,000 a year. When surveyed about what they spent the money on, 69 percent of borrowers cited recurring expenses, like rent and food — not the unexpected, one-time costs the loans are marketed to cover.

In a way, Joel Rios knew what he was getting himself into. He saw the poster in the payday loan offices he visited in Pocatello showing an interest rate of nearly 400 percent a year. But he says he just didn’t understand what that really meant.

The 39-year-old, who moved to southern Idaho from South Texas, found work driving a truck during the potato harvest, but struggled during the offseason. Despite enrolling in unemployment, he says he needed money for rent and normal monthly bills and to help care for his then-2-year-old daughter.

“At first it was nice,” he says. “You really don’t think about it. They make it sound so easy.”

When people like Rios take out a loan from a payday lender, they give the lender a check that’s post-dated for the date they’re expected to repay the loan. (Some lenders give money without a check for a higher interest rate.) When the time comes, a borrower who can’t afford repayment may renew the loan for another fee. Some states limit the number of times this can happen, but most allow it at least a few times, piling interest on top of the initial amount borrowed. A bounced check incurs another fee, and a failure to pay sends the debt to into default.

Rios went through it all. Soon, he found himself renewing loans over and over again, or taking out loans from one payday lender to pay off another one. He lost his car to a title loan he couldn’t pay back, and soon owed more than $1,000 to five lenders around town, all while earning little or no income. Rios says lenders harassed him for their money, and then started calling the friends he’d put down as references.

Advocates for payday lending regulation often cite stories like Rios’ to show the debt spiral borrowers can find themselves in, but Bassford calls those arguments “stale.” At his branches in Washington, borrowers can apply to pay off loans in 90 or 180 days. In Idaho, they can apply for a payment plan starting at four installments, but only once per year. Bassford says those should be enough help.

The Bureau of Consumer Financial Protection (created in the wake of the financial meltdown) has released guidelines to ensure payday lenders are following federal law. People with payday loan experience can share their stories on the Bureau’s website, and at the announcement of the new guidelines last spring, the Bureau’s director, Richard Cordray, said payday lenders would be getting “more attention” from his organization. But federal regulation looks unlikely, so states continue to set their own rules.

After Montana passed a 36-percent cap on payday loans in 2010, many short-term lenders said they would close their doors. In an interview with NPR, the head of the Montana chapter of a national financial service trade group predicted most short-term lenders in the state would soon close, slashing 400-600 jobs. And many have. A Google search for payday lenders in the state’s biggest city, Billings, now yields just a few still-open lenders along with plenty of dead links.

Besides losing business, lenders say increased regulation can send borrowers online, where the business is even shadier. But, according to the Pew study, that hasn’t happened in heavy-handed states. The research found that restrictive laws, like limiting interest rates, led to fewer borrowers and that only 5 percent of those would-be borrowers went online. The others just decided against using payday loans.

“While online borrowing often is discussed as a problem in states without storefronts,” the Pew researchers write, “it is nearly as prevalent in states with payday loan stores.”

Today, four years after his first payday loan, things look better for Rios. He’s working for a remodeling company and free of his payday loan debt, but that liberty came only after he filed for bankruptcy. He took a finance class through the attorney who handled his case, a class where he learned concepts that may seem simple but were new to him.

“Now I know how to live on a budget. Many of these people like me didn’t know or weren’t disciplined enough,” he says. “You don’t know how to save money. ‘Save it for a rainy day’ — a lot of us don’t grow up that way. That’s when [lenders] take advantage of that.”

But he says he still gets angry when he sees TV ads for payday lenders. He feels his blood boil when a cheery voice asks, “Do you need money?” and tells viewers how easy payday loans are to get.

“It’s like throwing a steak out there,” he says. “These people are starving financially.”