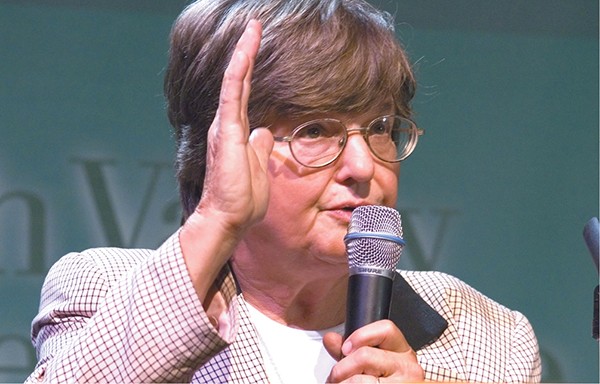 Don LaVange
Sister Helen Prejean wrote Dead Man Walking in 1993 and has been fighting against the death penalty since.

She's a 74-year-old Catholic nun who stands by electric chairs and prays with men during their last days.

When I ask Sister Helen Prejean whether this is what she envisioned her life would be like, she starts laughing into the phone. "What do you think?!" she says.

Her journey began in the 1980s, when she corresponded with two death row inmates and eventually witnessed their executions. It's an experience she captured in her book Dead Man Walking: An Eyewitness Account of the Death Penalty in the United States (which was made into an Academy Award-winning movie).

To this day, Prejean continues to write and lecture about the death penalty. The Inlander spoke with Prejean on the phone to ask whether or not she thinks capital punishment will ever go away, and what are the biggest tasks facing the American justice system.

INLANDER: Your work with death row inmates has been documented at length, but after all these years, what is your stance on capital punishment today?

SR. PREJEAN: What I learned in the beginning from being with people who were executed, and also being with the victims' families and also with the guards who have to carry out the executions, [my] stance is what I have seen close up as an eyewitness: that the death penalty is mostly about political symbolism. The reality is it doesn't solve anything. It's futile. In a way, it's an act of profound despair for us to try to show that killing is wrong, and that we abhor killing, and that we want to killing to stop ... and we do that by imitating the worst possible behavior. It's amazing to me that we're still doing it.

I was up at San Quentin [State Prison] two days ago, and I looked up and there's five tiers of cells back to back. Over 724 people condemned to death in California ... you see that [the death penalty] has got to be driven by this political symbolism, because what would make a district attorney go for the death penalty? Something that cost millions, and probably won't [result in anyone being] executed.

So why do you think the death penalty still exists?

I've figured one of the last reasons — because people know it isn't a deterrent, people who do crimes don't even think they're going to get caught, there's not a lot of consciousness — is that when people run for political office, it is the easiest symbol in the world that you are really tough on crime. Simply say you're for the death penalty, because that's the toughest penalty we can give. And we have to do it for the victims' families ... whether consciously or not, the victims' family has given us the ultimate legitimization for the death penalty.

But does the death penalty, in your experience, help the families of victims?

What I know, knowing victims' families, sometimes it's so sad: you see them come out of the death penalty trial and they're putting up their fingers in a "V" for victory. 'We got him!' And then they start waiting ... for 10 years, 20 years. And what's the promise? ... As more and more victims' families are speaking out now, they say that revictimizes [them]. And the person who did the crime gets all the media attention, all the notoriety.

What is it that keeps you coming back to this work?

It's the dignity of the people that have been condemned to death, who are made to feel that they're nothing more than basically human refuse to be disposed of — that they're so evil that the only way we can carry on as a society is to kill them. To terminate their lives. To rid ourselves of them. And I look into their eyes. ... when you encounter the human person like that, you know that everybody is worth more than the worst thing. We all are.

What do you think is the biggest task facing our justice system right now?

We know where the violence comes from in our society. It comes out of poverty, it comes out of addiction... you put oily rags next to a kerosene canister, you're gonna have a fire.

All of these are things we have to solve, but at least this: we have to take death off the table. Let's acknowledge that we can't handle death.

Realistically, do you think capital punishment will go away?

It is going away. We can see it happening. ♦