Jerk gets dumped, seeks revenge, screws his friends, becomes billionaire by accident. This is an Oscar movie? 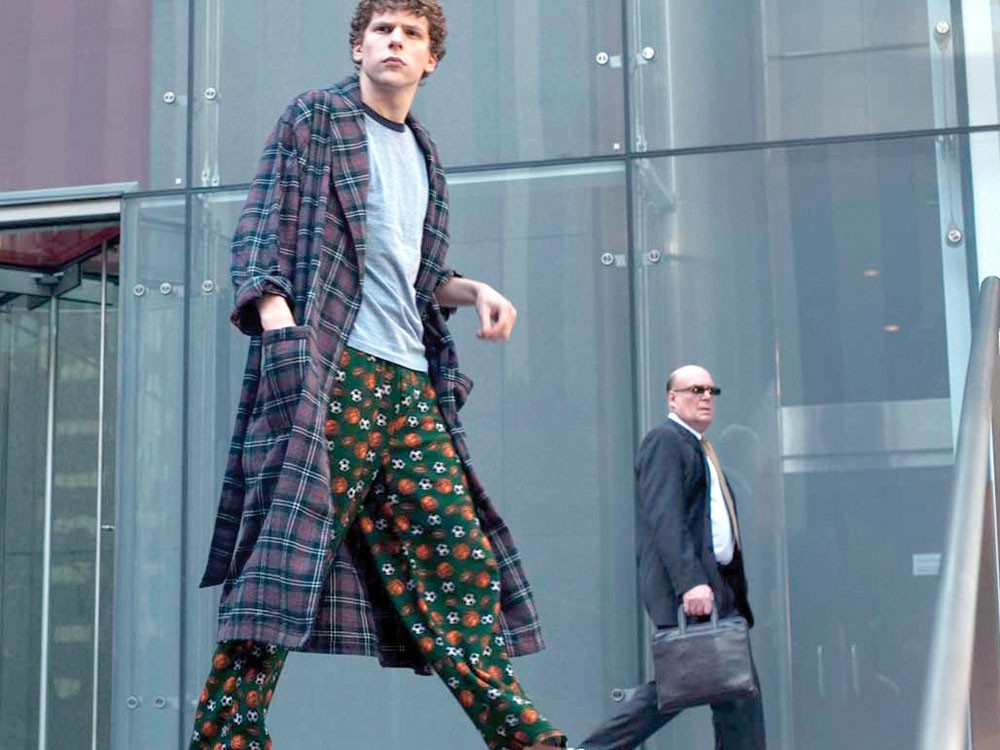 Alienating - and monetizing - even in his jammies

If you choose to go with the supposedly factual storyline in The Social Network, then Facebook founder Mark Zuckerberg came up with his insanely popular Internet site because he was rejected by a girlfriend. The way screenwriter Aaron Sorkin (A Few Good Men, The West Wing) and director David Fincher (Zodiac, Fight Club) tell it, Zuckerberg — at the time a Harvard sophomore with no social graces but plenty of computer savvy — was dumped one night, then went back to his dorm and, in a beer-soaked stupor, began a hacking scheme that would vent his anger on all of Harvard’s co-eds and morph into the phenomenon we know as Facebook.

Is it all true? Well, Zuckerberg says it isn’t, but he didn’t cooperate in the making of the film or the simultaneous writing of Ben Mezrich’s book The Accidental Billionaires. Book and script came out of painstaking research with people who knew Zuckerberg and his circle, including a few friends and many enemies.

Whatever we’ve got here, it sure makes for some compelling viewing. Zuckerberg is portrayed as a scowling jerk by Jesse Eisenberg, who has made a career of playing warm and fuzzy characters (Roger Dodger, Adventureland). Strong acting, along with direction to match, make it clear why no one likes this guy.

Sorkin and Fincher have viewers jumping around in place and time, showing the action develop, and suggesting that Zuckerberg might have calculatedly screwed a couple of upperclassmen — the Winklevoss twins, played by Armie Hammer and Josh Pence, with Hammer’s face electronically superimposed on Pence’s body — out of their ideas for a similar project.

That’s the first lawsuit against him. A second one comes from his former best friend and business associate Eduardo Saverin (Andrew Garfield), who claims that Zuckerberg thoughtlessly stuck a very sharp money-stealing knife in his back.

The film is crafted as a mystery. Did Zuckerberg do these heinous things? Was he all book sense and no common sense? Is the edgy Sean Parker (Justin Timberlake), who talks his way into the fray as an advisor, anything more than a paranoid and delusional troublemaker?

It’s certainly fun to watch and listen to. When Mark gets an idea, he rushes to a keyboard and types faster than 24’s Chloe O’Brian. Sorkin’s dialogue is often delivered in the style and breakneck speed of 1930s screwball comedies.

You can easily get completely involved in the stories, be startled when the film jumps into a boardroom where the lawsuits are being worked out, then immediately get wrapped up again in the swirl of flashbacks that led to the problems. Icing on the cake: It has an ending that Facebook lovers will dig.