Washington needs more doctors; how to actually train them is where the Cougs and Huskies just can't agree

Under the chandeliers of the Spokane Club

dining room in September, University of Washington President Michael Young stands at the podium in a Husky-purple tie. As the crowd of medical students, alumni and incoming UW undergrads dines on glazed salmon, Young gushes about UW's prestige.

"You will be enrolling in the 15th best university in the world. In the world," Young says, alluding to a global ranking from Shanghai Jiao Tong University. "I occasionally call up the president of Stanford and Harvard and say, 'You know, I can give you a little advice on how to be better.'"

That prestige extends to its medical school, ranked as tops in the nation for primary care, family medicine and rural medicine. Three Nobel Prize winners sit on the faculty.

And it's the only game in town. Other than Yakima's private osteopathic school, it's the only institution within a five-state swath — Washington, Wyoming, Alaska, Montana and Idaho, aka "WWAMI" — churning out doctors.

And that, Washington State University leaders believe, highlights both a problem and an opportunity. Washington state has nearly 7 million people, but only 120 public medical school spots for its residents each year. And at least 800 Washington residents apply annually. Only three states had a lower proportion of their in-state applicants get into medical school.

It's one reason why, also in September, the WSU Board of Regents voted to seek their own full-fledged medical school in Spokane. "There is no good reason to wait," says WSU President Elson Floyd. "We've been waiting for over 100 years. It's now time to act."

Yet the decision has sent shock waves through the community. Some worry that WSU's plans could destroy the UW's medical education in Spokane. But between the two universities, there's at least one point of agreement.

"At the end of the day, our state has to do a hell of a lot more," says WSU Board of Regents Chairman Mike Worthy.

Washington state needs more doctors. The question is how to get them here.

The doctor is out

"Unless we act now," warns a flyer from the American Association of Medical Colleges, "America will face a shortage of more than 90,000 doctors in 10 years."

It's a combination of factors: Baby boomers are aging, and more doctors are retiring. Washington state's population of doctors is particularly old. And health care reform's wave of the newly insured bumped up shortage estimates by 50 percent. "It's predicted by 2030 our entire state is going to need 4,000 more doctors," says Elaine Couture, chief executive of Providence Health Care in Eastern Washington. "We are not producing them, and they're not staying in Eastern Washington."

Yet there are plenty of local students who want to go to medical school in Washington state but can't: Sarah Hershman went to Ferris High School and the University of Washington. She was ready to go to UW's School of Medicine and applied twice — once in 2010 and once in 2011. Both times, she was rejected. 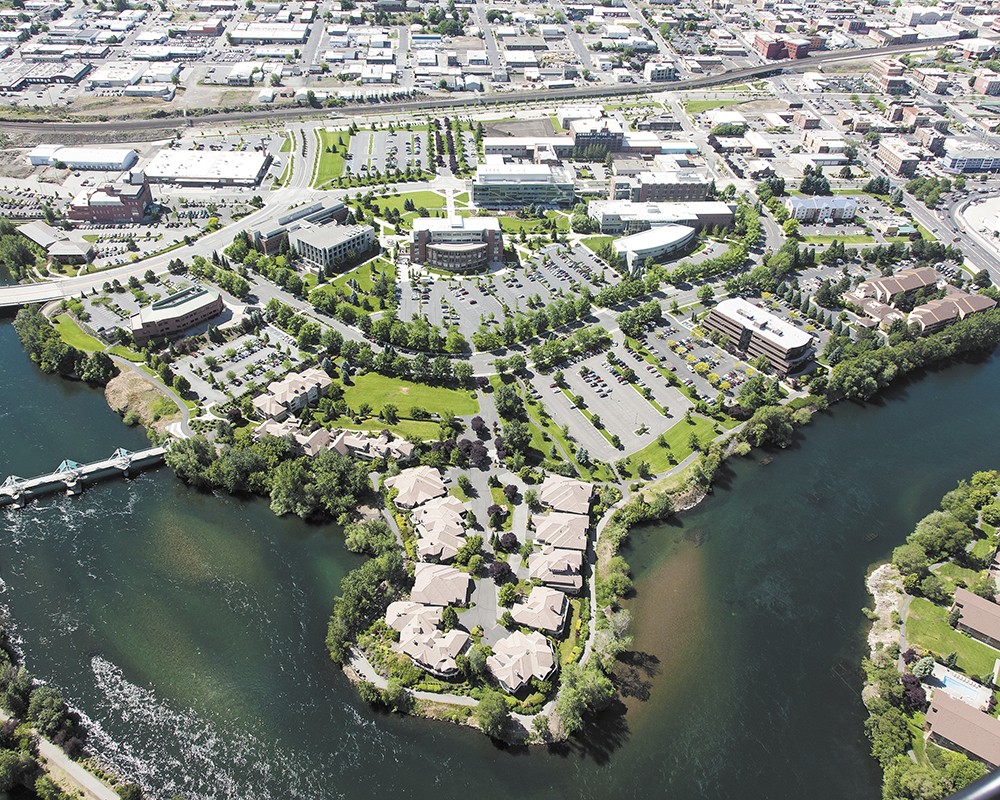 Isaacson Aerial/WSU-Spokane
An aerial view of the WSU-Spokane Riverpoint Campus. Thanks to years of public investment in new health sciences facilities, WSU says it will not need any new buildings to launch a medical school.

Today she's in her third year at the private Chicago Medical School at Rosalind Franklin University. The city of Chicago itself, she notes, has six medical schools and an osteopathic school.

Hershman loves Rosalind Franklin, but there's a very literal price of not getting into UW. "I'll probably graduate with $260,000 in debt," Hershman predicts. If she'd been at UW, she estimates in-state tuition would have reduced her debt load to $180,000. For her, that debt means potentially delaying having kids or buying a house. And it means she's less likely to practice in Washington state.

"Once you leave," Hershman says, "you're less likely to return."

Both UW and WSU say they want to dramatically expand the number of medical students educated in the state. UW wants to grow the size of each class in its Spokane program to at least 80 students, while WSU wants to eventually grow its own medical school to 120.

But it's not just the number of doctors in the state that's a problem. It's their geographic concentration. King County has less than a third of the state's population, but nearly half its doctors.

Since 1990, Marty Sackmann has been a doctor in Ritzville, a town of less than 1,700. He runs his own practice, estimating he works 70 to 80 hours a week. Even on vacation, he sometimes gets a call that he's needed. "When one of [the doctors in Ritzville] gets ill or sick ... it sends a ripple through the system" of the town's doctors, he says.

On average, the United States has a little over 24 doctors for every 10,000 people. But in Washington state, 18 out of the 39 counties have 10 or fewer physicians per 10,000 residents, according to WSU's medical school feasibility study.

Attracting medical students to practice in rural areas is an ongoing challenge, but Myra Hurt, associate dean at Florida State University's school of medicine, suggests a possible solution. She played a major role when FSU launched its own medical school 15 years ago, and was part of the consulting group that studied the feasibility of WSU creating its own medical school. At FSU, she says, students train in rural community clinics instead of big, university-based research hospitals.

As a result, most of its graduates go into primary care and stay in-state. Twenty percent are practicing in rural communities, better than the national average. "Even our doubters say we've succeeded beyond our wildest dreams," Hurt says. "Any of the benchmarks you want for success, we've got them."

WSU wants to copy that model.

But, UW argues, it practically invented the community-based model. "The model the consultants have proposed for WSU, and the one they've claimed is so cost-efficient and so forward-looking, is exactly the model that has been used for 40 years at UW," says UW Regent Orin Smith. In fact, when Florida State launched its medical school, Smith points out that UW's WWAMI program was cited as an inspiration.

"Very clearly, WWAMI is the cheapest and best way to supply medical education in the future," says former Gov. Dan Evans. Evans was governor back in 1971 when WWAMI was launched. Today, at 88, he's heading up a UW task force to reboot WWAMI.

WSU's projected cost per student for its new medical school is $90,000 — far cheaper than most medical schools. UW argues that WWAMI's $70,000-per-student cost already beats that.

But Hurt sees UW as clearly different from the vision of Florida State and WSU. Florida State recruits specifically in rural communities, whetting students' appetites for medical education as early as middle school. WSU wants to do the same. WSU wants its admissions process to favor not just test scores and acumen, but location: By intentionally admitting rural students, the hope is, those students will be more likely to return to their hometowns to be doctors.

No matter who expands, medical school graduates will run into a logjam upstream: Before they can become doctors, they have to undertake a graduate medical residency. While nationally the number of medical school students graduating has increased significantly, the number of residency slots hasn't — leaving more students competing for limited slots.

"Creating more seats in medical school, without a concurrent increase in residency opportunities, will cause more future physicians to leave our state for residency positions elsewhere," the UW argues on its Spokane Med School website. 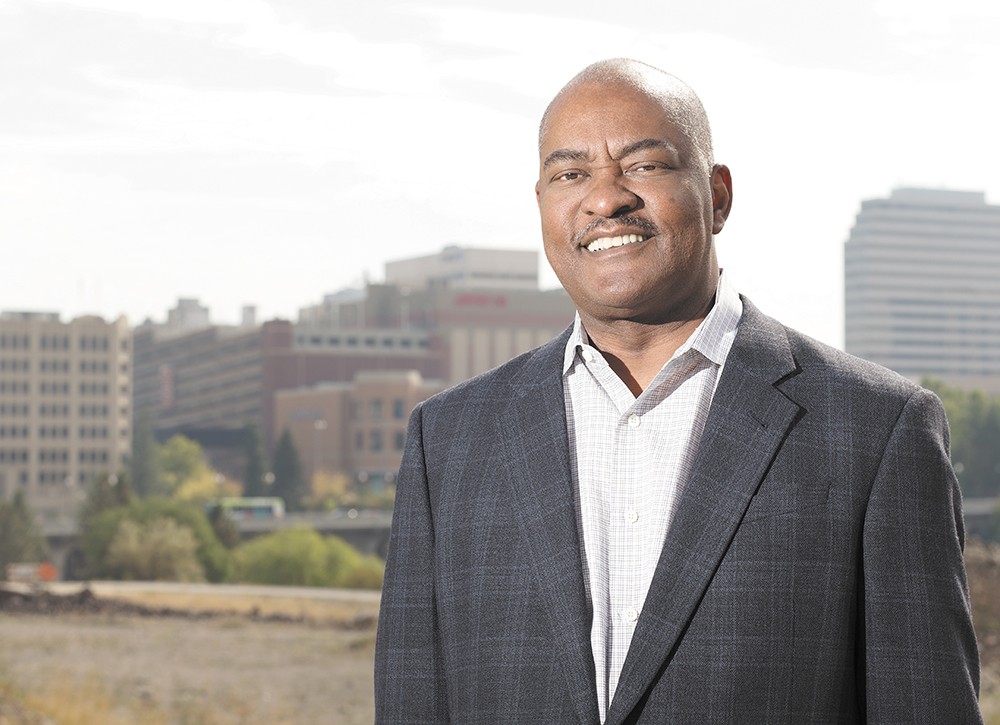 Young Kwak
WSU President Elson Floyd says a locally controlled medical school is what's best for Spokane and his university. "It was clear that the University of Washington was not committed, from my perspective," Floyd says. "That's the reason we engaged in the feasibility study. We just had to continue to move forward."

At Avista headquarters, in a meeting in September over reforming WWAMI, the tension boils over: UW Regent Orin Smith turns his chair to look at WSU Regent Mike Worthy across the long, wooden conference table.

Even though the details haven't been worked out, Worthy doesn't see a problem: "The notion that WSU could not continue to be a WWAMI partner, I say, with all due respect, is ridiculous." He argues that the school could use additional Riverpoint classrooms, cut programs, share faculty, and make other heroic efforts to ensure both programs could operate side by side.

Both universities plan to ask Olympia to expand medical education during the next legislative session, which starts in January. UW wants $10 million to increase enrollment in Spokane.

WSU doesn't need a dime in new construction — its $80 million health sciences building opened last year. But it will ask for $2.5 million to help pay for planning and accreditation. Eventually it'll need $47 million for annual operational costs. But both universities face a steep climb: The state expects a budget deficit in the billions.

"I think the real risk," says UW's Smith, "is the legislature doesn't have any money to begin with."

But Providence's Elaine Couture says the pressing need dictates a look at all options: "This is not a new problem, in terms of our need for doctors," she says. "This gap is big, it's urgent, and it's going to get worse. We don't consider it a question of either/or, but rather both." ♦