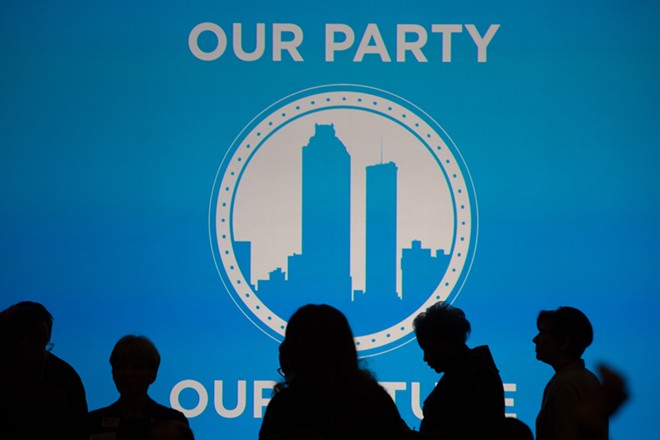 Kevin D. Liles/The New York Times
Silhouettes of guests at the Democratic National Convention's winter meeting at Atlanta Convention Center in Atlanta, Feb. 25, 2017. The FBI is investigating an unsuccessful hacking attempt on the DNC in August 2018, but the identities of the would-be hackers are unclear.
New York Times News Service
By Sheera Frenkel and Jonathan Martin

SAN FRANCISCO — The Democratic National Committee said on Wednesday it was alerted to an attempted hack of its voter database this week and has notified law enforcement about the incident.

A cybersecurity researcher from a firm called Lookout contacted the DNC on Tuesday about the attempted intrusion, said two officials briefed on the matter who were not authorized to speak publicly.

The FBI is investigating, according to one of the officials. But the attempted hack, which was described as sophisticated, was not successful, the committee said.

A Democratic Party official said the identities of those who attempted the hack were unclear, adding that the target of the effort was the party’s voter file, known as Votebuilder. The DNC was hacked in 2016 during the presidential election campaign, and the incident was later traced back to Russia.

The two officials said the hackers had this time set up a fake DNC login page that mimicked the political party’s real website, in order to gather the names, passwords and other credentials of those using the voter database. The hackers may also have sent emails to people within the committee to try and trick them into using the fake login page, a tactic known as spear-phishing” the officials said.

“This attempt is further proof that there are constant threats as we head into midterm elections and we must remain vigilant in order to prevent future attacks,” said Bob Lord, chief security officer for the DNC.

“While it’s clear that the actors were going after the party’s most sensitive information — the voter file — the DNC was able to prevent a hack by working with the cyber ecosystem to identify it and take steps to stop it,” he said in a statement.

Lookout confirmed that it had been in touch with the DNC, and the attempt was also detected by DigitalOcean, a cloud service provider.

Earlier this week, Microsoft said it had detected attempts by hackers tied to Russian intelligence, which targeted the Senate and conservative think tanks in the United States, also by creating fake websites.

Lord said the White House needed to get involved. “These threats are serious and that’s why it’s critical that we all work together, but we can’t do this alone,” he said. “We need the administration to take more aggressive steps to protect our voting systems.”