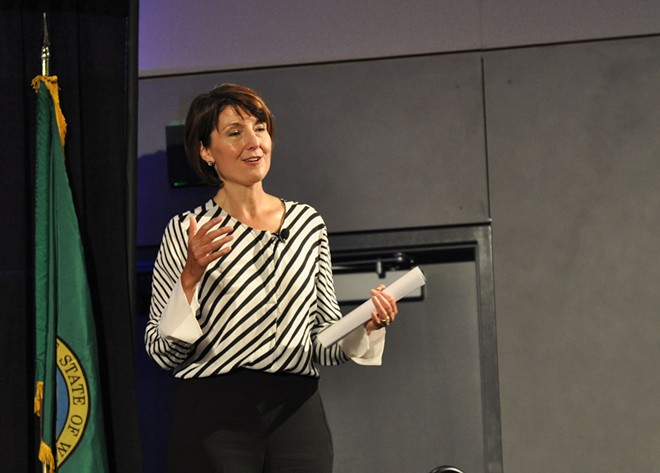 Back in May, we asked Rep. Cathy McMorris Rodgers if she believed President Donald Trump was an honest person.

"I have to take everyone at their word," she responded. "I take Donald Trump at his word."

But a lot has happened since then. Last week, the Trump administration was hit two of the biggest bombshells to blow up in a presidential administration in decades:


In an interview after last week's town hall meeting, the Inlander pressed McMorris Rodgers on whether she still takes Trump at his word.

INLANDER: The Washington Post used the word "lie" for the first time because Trump had said he had no notice of some of the payoffs before the election. And yesterday in an interview he said he actually did have knowledge of that."

CMR: Which one? The payoffs?

INLANDER: It's kind of confusing because there are multiple people that he paid off before the election, but he denied knowledge of those payoffs a couple months ago, and now he says he does know about that.

INLANDER: OK. I guess, have you revised your assessment of his honesty or trust at all in the last few months.

CMR: As I told you before: Trust, but verify.

INLANDER: "Have you done any verifying?" I guess is my question.

CMR: Well, a lot of what we're dealing with is still speculation. I need to see what you're pointing to.

CMR: I believe you. It's just I have to see for myself.


Indeed, Congress has a unique power to verify the truth. This weekend, the journalistic outfit Axios reported that a spreadsheet from a "senior House Republican office has been circulating," detailing a list of potential investigations that the House, in the future, could undertake.

Those investigations include, "the payment to Stephanie Clifford — a.ka. Stormy Daniels," "President Trump’s tax returns," "Trump family businesses — and whether they comply with the Constitution's emoluments clause, including the Chinese trademark grant to the Trump Organization," "discussion of classified information at Mar-a-Lago" and the "family separation policy."

But, to be clear, these are not investigations that House Republicans are planning on conducting themselves. Instead, it's a list warning of a future that Axios says "has churned Republican stomachs," where Democrats take the House and conduct investigation after investigation of Trump.

By contrast, in secretly recorded comments at a McMorris Rodgers fundraiser, Rep. Devin Nunes (R - California) seemed to suggest that the Republican Party's role was as to be the line of defense against Robert Mueller's investigation.

“If [Attorney General Jeff] Sessions won’t un-recuse and Mueller won’t clear the president, we’re the only ones, which is really the danger,” he said.

There have been times when McMorris Rodgers has verbally stood up against Trump. She joined the chorus of Republicans strongly condemning his administration's family separation policy. But on other issues, she's pointedly declined to weigh in.

“Do I support a pardon for Manafort?" she said, responding to a town hall question. "You know, that’s a decision the president will make.”

Despite her ads promoting the "rule of law," McMorris Rodgers took a similarly hands-off stance on the controversial pardon of Joe Arpaio, the former Arizona sheriff with a long list of civil rights abuses, including racial profiling.

And yet, as the Spokesman-Review first reported, McMorris Rodgers actually pressed for the pardon of Dwight and Steven Hammond, ranchers who had been sentenced to five years for setting fires on federal land.

We asked McMorris Rodgers about her role in pushing for the Hammond pardon:

CMR: I had shared that I thought that the federal government had overreacted in that case. I thought the sentence was beyond [what was] appropriate.

INLANDER: So we've established that you're willing to weigh in on pardons.

INLANDER: The Manafort pardon! You dodged that question.

CMR: I know. Because I normally don't weigh in on these issues.

CMR: Because I believe in an independent judiciary. You know, I have a role as a representative. So, I'm hesitant to start trying to litigate every decision, right?

INLANDER: We've seen situations where you and other members of the House GOP have kind of served as a backstop when things have gone too far. Family separation was an example of that, right? There are some people who are hoping that you'll draw a line in the sand and say "don't pardon Manafort." That you'll actually put your money where your mouth is — or your mouth where the money is, I guess, in that case.

CMR: I'm just not ready to do that.


We also asked McMorris Rodgers what, in the last two months, made her the angriest.

CMR: Oh boy, you know what comes to mind? The media. [Chuckles.]

INLANDER: What? What story? What media story? It might be me, specifically...

INLANDER: Are we "dirty" "godless?"

CMR: No. There's an important role for the media. I believe that.

INLANDER: What percentage of us are enemies of the people?

CMR: I don't believe that you're enemies of the people. I believe the media has a very important role to play. But it's very important that the media inform people and not include their own biases in stories. And I am very concerned about...  Am I being quoted right now? You're gonna...

INLANDER: Always. What story are you upset about?

CMR: I'm not prepared to go down this path with you right now. So, anyway. You asked the question and that's what came to mind. I was like, "oh, Lord."

INLANDER: You know you can call me anytime.