This recovery has been brought to you by the letter "K." 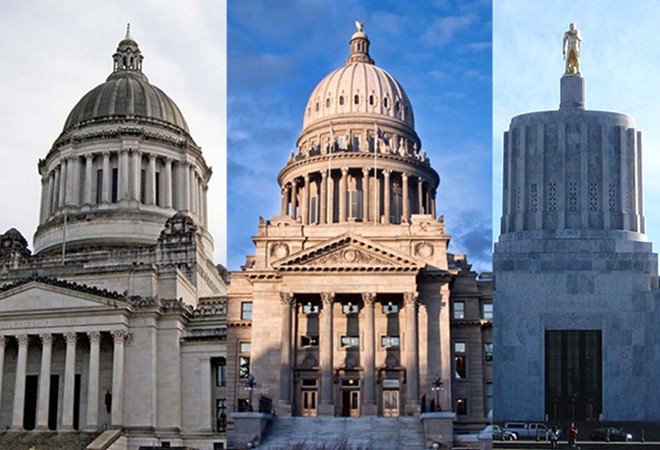 Officials in Idaho, Washington and Oregon all thought they’d be facing nightmarish budget deficits because of COVID. Instead, revenue just kept on growing.

Like state governments across the country, IDAHO was anticipating that COVID would blow a bazooka-sized hole through their state budget.

Instead, the exact opposite happened. Idaho began to take in a lot more tax revenue than they thought they thought before the pandemic.


"We’re actually $125 million up in terms of the forecast,"  Adams says. In fact, Idaho had the best economic recovery in the country, the New York Times reported this week.

In part, Adams credits the governor's "quick and surgical actions to prepare for the worst." While Idaho did mandate that some businesses shut down, the lockdowns were a lot shorter and a lot less strict than states like Washington. For example, they didn't shut down home construction at all.


While other states saw their tourism industry flounder, Adams says Idaho's tourism, heavily reliant on the sort of outdoor recreation where social distancing is possible, dodged the impact.


"There’s a lot of evidence some of the Washingtoners came over to our parks," Adams says.

And not just parks.


"I don’t know about you," says Washington state Rep. Mike Volz, R-Spokane, "but I have been hearing a lot of people who are going across the state lines to Idaho and going to their restaurant and their bars and their eating establishments."

But Idaho's booming economy may have been bought for a steep price: More than 172,000 Idahoans have been infected with COVID. More than one out of every 1,000 Idahoans — 1,879 people — have died from the virus. Adjusted for their populations, Idaho has suffered over twice as many COVID infections as Washington state and 57 percent more deaths.

If Idaho had been as successful as Washington at fighting COVID, the state would have 680 fewer COVID deaths.

And while its state economy hasn't been on fire like Idaho's, WASHINGTON STATE actually saw its state revenue grow as well. As the New York Times laid out in a map this week, Washington state's tax revenue between April and December 2020 was actually 2.5 percent higher than it had been in the same period a year earlier.

David Schumacher, director of Washington's Office of Financial Management, says they thought Washington would be facing a fiscal disaster too.


"We took the forecast way down, by $9 billion over three years. We did a hiring freeze; we asked agencies for cut drills," he says. "It was kind of a 'Uh oh. If this really happens, we're in trouble.'"

But they were bracing for a blow that never came. The state kept revising its budget revenue predictions to be more optimistic, but each time, the actual results outpaced them.

"All of a sudden what we realized is the economy it has slowed down some, but not drastically," Schumacher says. "People are still spending their money."

On the New York Times map, it looks like OREGON is a major exception to the Pacific Northwest trend. It appears like its tax revenue fell by 10.5 percent during the pandemic compared with the year before. But Oregon's state economist, Mark McMullen, says that stat isn't showing the full picture.


"In terms of our budget situation, revenue losses is not what we're experiencing," McMullen says.

First, he says the state isn't taking advantage of Oregon's corporate activity tax. But maybe more importantly, there's a quirk in Oregon law called a "kicker" credit. Whenever Oregon income tax revenue comes in significantly higher than projections, instead of the gains being funneled into the general budget, they're set aside and eventually sent back to the taxpayers.


"When the pandemic hit, we blew a $2 billion hole in the budget, assuming that all of those job losses were going to turn into revenue losses," McMullen says. That didn't occur."

So while the state actually took in a lot more revenue than it expected, because of the kicker rule, it doesn't actually get to use a lot of that revenue.


"We gave out a record-sized kicker in the 2020 tax year — well over $1 billion off of the total. That really affects those growth rates," McMullen says.

Sometimes, that kicker can set the state up for a budget nightmare: Right before the Great Recession hit in 2008, he says, the state gave out a massive kicker, leaving state coffers depleted heading into economic collapse. McMullen says that's not happening here.

"As of the forecast we did last week, we now expect more revenue than we did heading into the pandemic," he says. Adjust for the kicker and the new corporate tax, and he says Oregon tax revenues are actually up about 5 percent.

As with most things these days, the state revenue data has become a partisan inkblot test.

In Idaho, Republican politicians like Gov. Brad Little and U.S. Sen. Mike Crapo have used Idaho's success as a cudgel against the Democrats' $1.9 trillion stimulus proposal, arguing that the $350 million targeted at state budgets will end up rewarding "irresponsible" states that put into place more stringent lockdowns at the expense of their economies.

But Democrats have argued that it's proof of the power of government intervention. The trillions of economic stimulus — supercharged unemployment benefits, increased rental assistance, direct $600 checks and forgivable business loans to prevent layoffs — worked.


"One of the lessons of the last recession is the deep cuts prolong the recession," Washington state Senate Majority Leader Andy Billig says. "One of the reasons that Washington has done better is we have not had a knee-jerk reaction to cut services at the time when people need help."

Yet, as both Republicans and Democrats will tell you, there's a dark story hidden among the positive state revenue news.


We're in the middle of what economists call a "K" shaped recovery. Picture an economic chart with a line splitting off into two — one line soaring, while another line plunges — in a shape somewhat reminiscent of, well, the letter K.

If you average the two lines, like with state revenue, you'll miss the real trend: The economic tide has lifted some boats and capsized others.

During the Great Recession, practically the entire economy collapsed. Here, it's more like a see-saw. As one side has gone down, but the other has gone up.


"I'm standing outside right now in my front yard," says Schumacher, the Washington state Office of Financial Management director. "I would bet you money that an Amazon truck goes by while we're talking."

Whether you buy a book from Auntie's Bookstore or Amazon, Washington state collects the same amount of sales tax from your purchase. So the state makes out just fine.

But smaller businesses have been hurting, says Volz, the Republican legislator from Spokane.


But what about Oregon, which relies on income taxes instead of sales taxes?


Compared to the last two recessions, the difference is "that we haven't had a stock market crash or asset market crash," says McMullen, the Oregon state economist. "Last few times, the stock market went down by a third or a half. And this time it's up 20 percent. This makes a huge difference for income tax states."

There's another curious difference McMullen has noticed: During the last recession, rural communities struggled to recover while cities bounced back. This time it's the opposite, he says. The big downtowns are in trouble, without tourist dollars, commuters or business-lunchers. But rural areas are doing surprisingly well.

The timber industry, a key part of the rural economy in the Pacific Northwest, was hammered during the last recession. This time demand has only grown, and wood prices are incredibly high. Home sales and the construction industry were devastated in 2008; this time, construction is booming, and home prices are soaring.

That's great if you're a Realtor. But the high demand has made an already existing housing crisis in the Pacific Northwest worse. Vacancies are at record lows in Spokane. Rents keep climbing. The number of people who can't pay their rent or their utility bills keep increasing.