How to make your Bloomsday experience worry-free 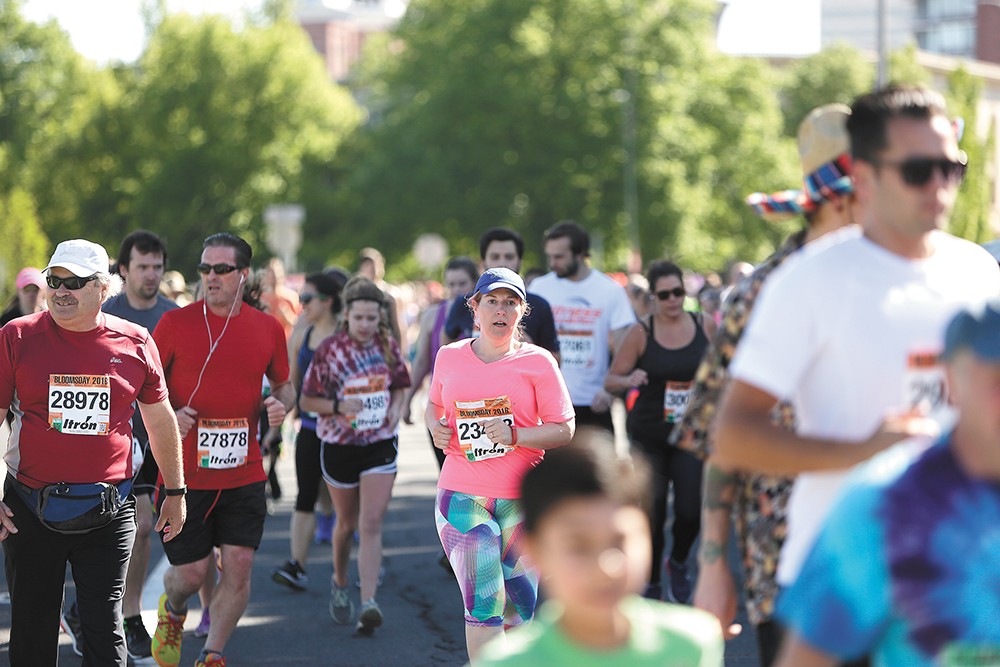 accessibility to some areas during the 41st annual Bloomsday weekend will differ this year. Even so, race organizers are confident that the tens of thousands of Bloomies won't see their experience dampened by these changes.

"Fortunately, the route is all the same — other than Doomsday," which recently reopened after a big construction project, says Bloomsday founder Don Kardong. "The start and finish will be just like last year and other years."

The biggest and most noticeable change, however, is an alternate post-finish and T-shirt distribution area. Usually, finishers walk across the Monroe Street Bridge and take a left just after the bridge onto Spokane Falls Boulevard, where volunteers near City Hall pass out the coveted reward for completing the 7.46-mile race. But because of ongoing construction to install a 2.2-million-gallon combined sewer overflow tank beneath that stretch of Spokane Falls, finishers are instead to be diverted to Main Avenue, explains Kardong. T-shirts will be handed out in front of River Park Square.

Race participants can then head home or to the post-race festivities in and around Riverfront Park, happening despite construction projects in the park's Gondola Meadow, and for the Looff Carrousel's new shelter. Kardong says most of the post-race food vendors, performers, a beer garden ($3 admission; ID required) and other activities — all of which run until 3 pm — will instead be set up along Spokane Falls Boulevard and surrounding streets. Corporate Cup participants and their pre-paid guests, however, can find their separate VIP afterparty in that event's usual spot at the Clocktower Meadow.

One change that may disappoint some Bloomies this year is the lack of access to the commemorative Bloomsday runner sculptures, currently located behind a construction perimeter fence. The 40 figures of The Joy of Running Together are still set to don historic finisher T-shirts as they do each race day, but finishers won't be able to get up-close photos with the sculptures.

"I just hope people realize we're trying to do our best given all the construction in the post-race area," Kardong says. "We know it's not going to be quite as smooth as in the past, but we hope people understand that we're doing the best we can." ♦

• The race officially starts at 9 am on Sunday, May 7, with staggered starts every 15 minutes thereafter for the yellow through red bib groups.

• Only small fanny packs, running belts, or clear plastic drawstring bags are allowed to be carried on the course. No opaque backpacks, bags or water bottles are permitted. (Spectators are also asked not to bring backpacks, bags and coolers to the course.)

• Because of Riverfront Park construction, those parking at the Spokane Arena or elsewhere north of the river should use Washington and Stevens (both closed to traffic) to get to their start area.

• Take the bus! Spokane Transit offers Bloomsday shuttles to and from Spokane Valley Mall, Ferris High School, NorthTown Mall and EWU Cheney. If you didn't already, purchase a prepaid pass at the trade show, or pay exact change of $1.50 each way.

• Didn't register yet? Last-minute entries are $35 at the trade show check-in Friday and Saturday.

• Lose your running partner in the crowd and don't have your phone on you? The official "reunion" area is in the park near the red wagon slide.

• Finally, this year's T-shirt color will be... a surprise!