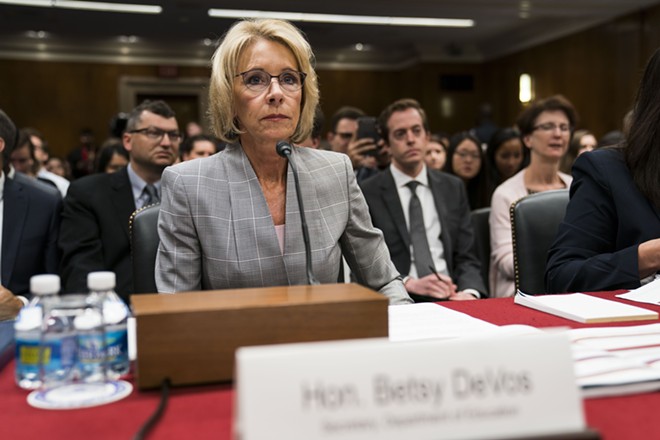 WASHINGTON — The Education Department is preparing to withhold millions of dollars from Connecticut schools over their refusal to withdraw from an athletic conference that allows transgender students to compete on teams that correspond with their gender identity.

The move to withhold about $18 million intended to help schools desegregate could have national implications for both transgender athletes and students of color.

The department’s Office for Civil Rights has warned officials at three Connecticut school districts that it will not release desegregation grants as planned Oct. 1 unless the districts cut ties with the Connecticut Interscholastic Athletic Conference over its transgender policies. Negotiations among the parties continued Thursday evening.

Officials with the conference, which governs high school athletics in the state, say their policies conform to Connecticut law.

The five-year grants totaled about $45 million, and the remaining $18 million was destined for districts in New Haven, Hartford and southeast Connecticut that operate magnet schools under a federally approved voluntary desegregation plan. The money generally allows students from Black and Hispanic communities to attend high-performing schools outside their neighborhoods.

But that drive is colliding with the administration’s intent to broadly deny legal protections to transgender Americans.

“It’s effectively extortion,” said New Haven’s mayor, Justin Elicker. “The federal government is trying to force us to take a side against transgender individuals.”

Angela Morabito, a spokeswoman for the Education Department, said the administration gave the three school districts several opportunities to quit the sports league before threatening to pull the grant funding.

The issue of transgender athletes on female high school sports teams is the subject of a federal lawsuit in Connecticut. But well before a ruling, the Education Department in May warned the Connecticut Interscholastic Athletic Conference that it considers allowing biologically male athletes to participate in girls’ sports a violation of Title IX, the 1972 law that prohibits sex discrimination in programs that receive federal funding.