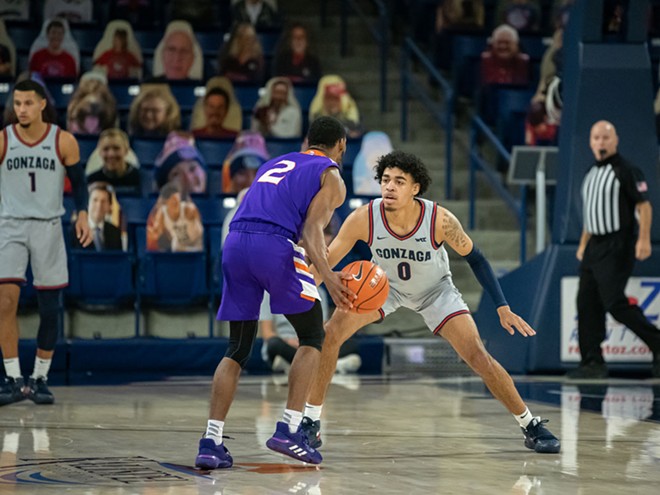 Guard Julian Strawther and his fellow Zags will need to "D up" to reach their full potential.

Last week Gonzaga’s air of invincibility seemed in question for the first time in the Zags’ so-far undefeated season.

For the first time this Gonzaga team was legitimately challenged, and by a team that should on paper have no business hanging with the No. 1-ranked Zags. That said, the Saint Mary’s Gaels aren’t a team you can just look at on paper when they play Gonzaga. They’re the Zags’ arch-rival and they know Gonzaga better than any team in the country possibly could.

Randy Bennett’s team controlled their game at home on Saturday against Gonzaga like no team has to this point this season. This is nothing new. Think back to two seasons ago when Saint Mary’s upset Gonzaga in the WCC Tournament Final to clinch a bid to the NCAA Tournament. They won 60-47 in that game by just mucking things up on both ends. The best defensive team in the sport, Virginia, couldn’t do that this year against Gonzaga, but Saint Mary’s knew how. As a result, they may have put down a blueprint for other teams to copy.

Gonzaga’s been a blistering offensive team this season. They’ve spent the whole year as the most efficient offense in the nation and averaged at least 85 points per game before Saturday’s match with Saint Mary’s. The Gaels held them to 73. And how they did that is what’s concerning.

Sure, no other team has done this, and of course, Saint Mary’s knows Gonzaga as well as anyone. But still, the Gaels took Gonzaga out of its run-and-gun approach and stifled them significantly when they did.

That’s a plan other teams will certainly try, at the very least, to follow. Whether other teams can mimic Saint Mary's approach is yet to be determined. And of course, despite the Gaels’ best shot, the Zags still came out on top.

Saint Mary’s showed that it is possible to break Gonzaga’s elite offense. It’s possible to slow down what is normally the most high-powered team in the sport. Overall, the Zags are so good that it shouldn’t matter. On Saturday, it didn’t. But this is a vulnerability.

A week prior to the Saint Mary’s game Gonzaga beat Portland 116-88. That’s a massive margin of victory, and scoring over 100 points in a game is hard to argue against. But, Portland scored 88 points. Portland is really bad. Their two best games this season came against teams from below the Division I level, and they weren’t much better against them than they were in their best game against a Division I team, and yes, that team happened to be Gonzaga.

Defensively Gonzaga is at a place where it’s allowing a putrid Portland offense to score 88 points. It’s allowing a familiar, but not good, Saint Mary’s defense to stifle it. So far, the Zags’ offense has been good enough to overcome those issues. Eventually though, especially come tournament time, it's going to become a serious gamble to allow teams to score in the 80s. Especially if teams learn how to keep Gonzaga in the 70s.

So far this season only one team has learned to do the former, and few to do the latter, while none have done both. Which I suppose is a happy place to be as a fan, for now at least.