On the job at an archaeological survey of Riverfront Park 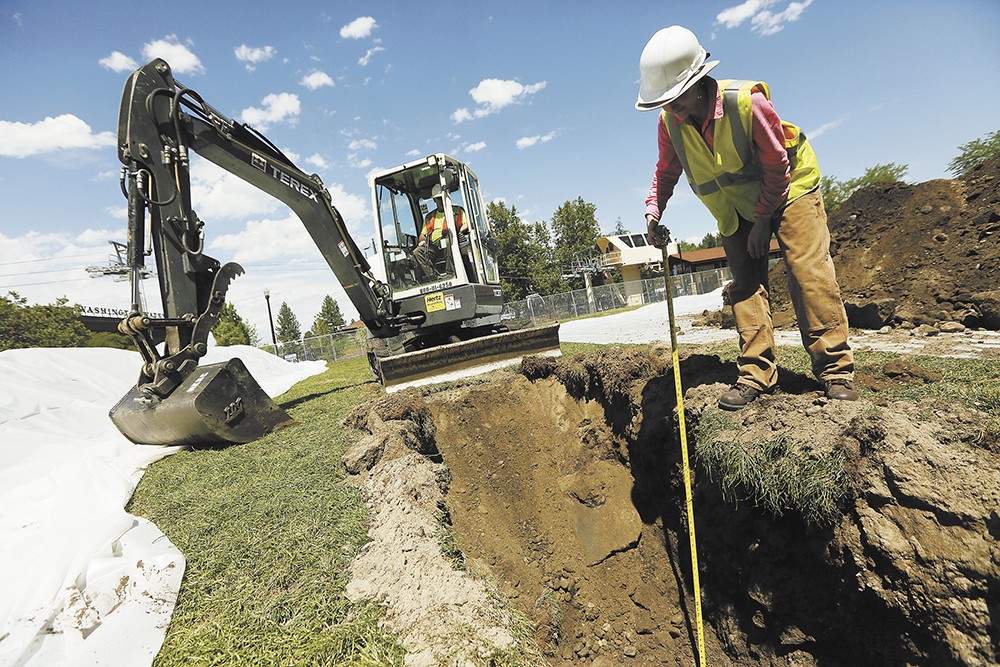 Young Kwak
Fort Walla Walla Museum archaeologist Ashley Morton inspects a trench in Riverfront Park's Gondola Meadow, which was once a prominent area for the Spokane Tribe before becoming an early part of downtown Spokane.

to you is the hats. Ashley Morton and James Burr Harrison do not have cool hats. Rather, as they inspect a 4-foot-deep, soon-to-be 60-foot-long trench dug into a grassy stretch of Riverfront Park, they're decked out in hard hats. There's a backhoe digging in front of them, so the headwear is wise, if not required, even if it doesn't fulfill your cinematic expectations of how an archaeologist should look.

But Morton, a historical archaeologist with the Fort Walla Walla Museum, says they have a duty to be here. First, they're required to perform an archaeological survey in accordance with historic preservation laws, as the Spokane Parks Department prepares to build on the site as part of the ongoing renovation of Riverfront Park. But they also want to know what's under there, and see if there are stories that can be gleaned from what's in the dirt. That's the job of an archaeologist, even if it's not as sexy as Harrison Ford made it out to be.

"I enjoy it all, but there is more office time than people realize," says Morton.

Nevertheless, there's a real possibility that Morton — along with Harrison, the principal investigator with the Spokane Tribe of Indians — will discover something over the course of the dig, which could run as long as four weeks in the currently fenced-off section of the park known as Gondola Meadow.

The current meadow is at least the third incarnation of the space. It was a bustling section of downtown Spokane, replete with hotels, saloons and residences. By 1914 it became a rail yard; 1974's Expo transformed it into an open public space. Before it takes on fourth life as a multi-use recreational facility, this study commissioned by the city will take a look back.

Before any ground was even broken in the park, Morton inspected a 1910 map created by a fire insurance company and overlaid it with the current plot of land. For instance, she knows that at the park's northwest corner, there was the Portland Hotel, and on the opposite side of the meadow stood a butcher shop owned by William and Marguerite Gow.

"From the 1880s to 1913, you have commercial and residential properties. The interesting part of this area is the various immigrant communities that lived here. We have Japanese families, we have families from Scandinavia, we have transient labor workers to work the railroad, and others," says Morton.

Long before there were businesses or railroads, there were indigenous people gathering in what would eventually become Riverfront Park.

"Spokane Falls was a significant cultural place for the Spokane Tribe. It was called the 'fast water place' and it was also a major, major fishery, with a big village right around here," says Harrison. "It was a major hub, but over time it's been masked by the city."

Native Americans have tied lore to the site. A Coeur d'Alene tribal elder recorded a story about the coyote creating the Spokane Falls as a way to keep salmon from swimming upriver. As the tale goes, the coyote did it as revenge for the tribe not letting him marry one of their women.

Harrison and the Spokane Tribe work on about 15 of these archaeological surveys a year, an increasing number of which are located in more urban areas. Recently, Harrison worked at a site just across the river along Monroe Street, where a new reservoir tank is being built.

Morton's description of her duties at the dig site isn't the stuff of Steven Spielberg's films. There's no bullwhip or marauding Nazis, but that doesn't mean there isn't any excitement. On the first day of the dig, she already saw evidence of antiquated glass bottles and pieces of ceramic. Recently, she says, a dig at a construction site in Philadelphia uncovered artifacts from the 1700s. That, of course, is the dream of an urban archaeologist like Morton, but there's also a sense of duty that comes along with the profession.

"[The dig] helps us best learn at the front end if there's any intact remains before construction begins. Yeah, it is possible we don't find anything because we didn't dig deep enough," says Morton.

She doesn't go long without looking back at the expanding trench in front of her. Who knows what could be in the next load of dirt? ♦