Spokane Police test the pros and cons of body cams 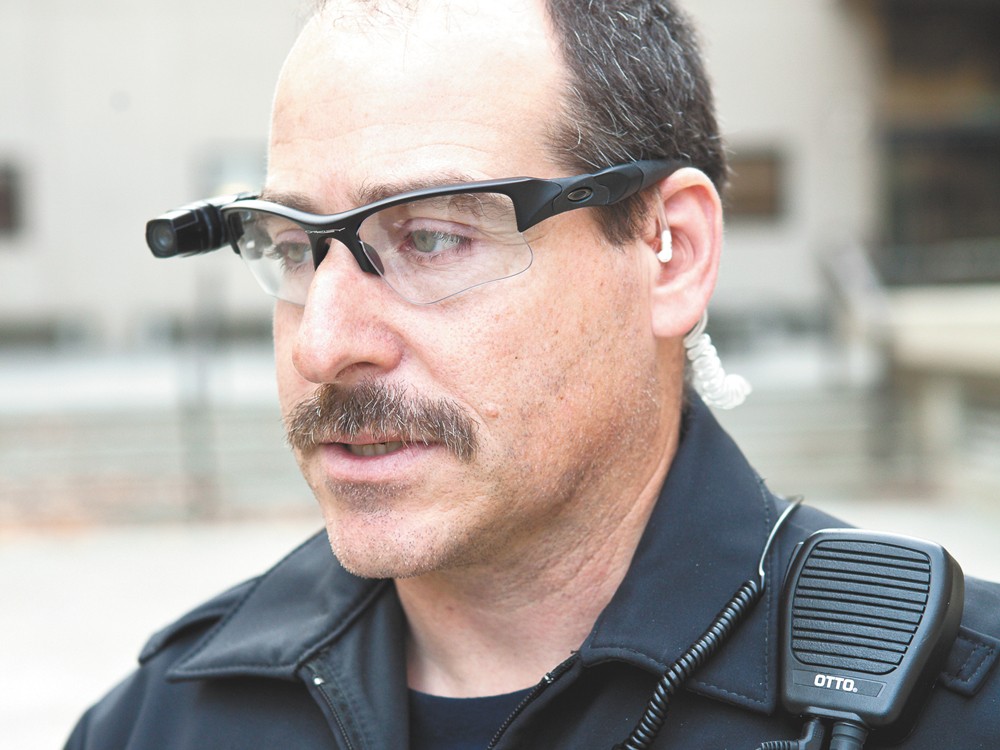 With a small, black video camera attached to the right side of his safety glasses, Spokane Officer Vic Carroll scans the courtyard outside the Public Safety Building. A second pager-like camera clips to the front of his jacket, recording audio and video of the people passing before him.

Carroll unclips the camera from his chest. The Vievu LE2 body camera looks like a small plastic box with a lens on the front. Next, the officer removes his safety glasses to show off the chapstick-sized camera mounted to the side, the Axon Flex.

Both cameras start rolling with the flip of a switch, he says. Where he looks, the cameras record. Both can capture hours of high-quality video and audio. Both have proven durable under rough working conditions.

Like handheld radios and dashboard cameras, body cameras have recently joined the ranks of increasingly essential law enforcement tools as investigators seek independent records of controversial, and sometimes deadly, police encounters. In the age of cell phone cameras and YouTube, police departments believe body cams can help show their side of the story.

With a recent history of community trust issues and officer misconduct allegations, the Spokane Police Department started considering the use of body cameras earlier this year. Carroll and other officers launched field testing of the Vievu LE2 and the Axon Flex in September.

Spokane Police Chief Frank Straub says he can imagine many potential benefits to body cameras. Most footage would document officers performing admirably, he says, while giving unruly citizens a reason to think twice before making a scene.

But Straub says he also wants to make sure the department carefully considers how and when they would be used.

“There are not a lot of departments in the country where officers deploy full-time with body cameras,” he says, “so it’s very much a developing field.”

Outfitting the Spokane department with individual cameras and archiving equipment would cost a minimum of $600,000, according to early estimates. City officials have voiced support for the investment, but timing and budget details remain unsettled.

While field testing continues, Straub says he will work with the city’s legal department to determine how the cameras could best be used, how to train officers, how to secure and archive footage for evidence, and how to update department policies to incorporate the new technology.

Major Frank Scalise, who oversees the department’s Operations Bureau, has served as project manager for the evaluation of the body cameras. He has coordinated all experimental testing, field study, maintenance planning and policy review.

Scalise says the department considered many models before focusing on the Vievu LE2 and the Taser Axon Flex. Both models cost nearly the same — about $900 — but have several unique features. He says officers want to determine which works best for local needs.

“We are looking for a camera that has quality video [and] audio,” he says, “meets tamper-proof requirements for evidentiary purposes, is lightweight enough and configurable enough for a patrol setting, and is hardy enough to withstand the rigors of day in and day out patrol.”

The Vievu LE2 wins points for its simplicity. The camera starts rolling when the shutter is open and stops when it’s closed. The Seattle-based manufacturer reports the light-weight camera records four hours of video and easily clips to the front of the officer’s uniform.

The Axon Flex has the advantage of mounting to glasses, a hat or collar, which gives it the ability to move with an officer’s eyes, but it also has a wire that must connect to a separate power pack. The Arizona-based Taser company reports the camera also takes four hours of video.

For testing, the department sends two of each camera model on each shift. Carroll says the same officers get a chance to work with both models to compare their pros and cons.

Scalise hopes to make a recommendation on camera selection and policy changes by the end of the year, once testing has concluded.

“It is incumbent upon a police agency to be thorough when considering a program like this,” he says, “and to make a well-reasoned, intelligent, data-driven choice about what kind of program to implement and with what equipment.”

Spokane Police Ombudsman Tim Burns, who handles public complaints against officers, filed a recommendation last year strongly supporting the department’s use of body cameras. He says he has found the testing process encouraging, but he remains impatient.

Burns believes video will help clear officers of wrongdoing or hold them accountable when they step out of line. He agrees it will also make citizens think about their actions before they become rude or aggressive toward officers.

“It’s going to be an independent witness,” he says of the camera. “It will speak for itself.”

Burns understands the need to carefully consider department policies, but he hopes to see officers wearing body cameras by the middle of next year. He says many other departments have already started using the cameras with great success, including the Airway Heights Police Department and the Coeur d’Alene Police Department.

“Most people I’ve heard speak about it have been supportive,” he says. “It seems to be moving from a novel idea to a best-practice idea.”

Coeur d’Alene Sgt. Christie Wood says the Idaho department spent more than a year evaluating and budgeting body camera options before assigning them to officers this past August.

“We don’t have any negatives with it,” she says. “Our officers are very happy with them.”

Somerton says the City Attorney’s Office handles about 40 to 45 traffic and misdemeanor cases a day. Since their introduction in August, body camera recordings have played a helpful role in nearly every case.

“They make a world of difference,” he says.