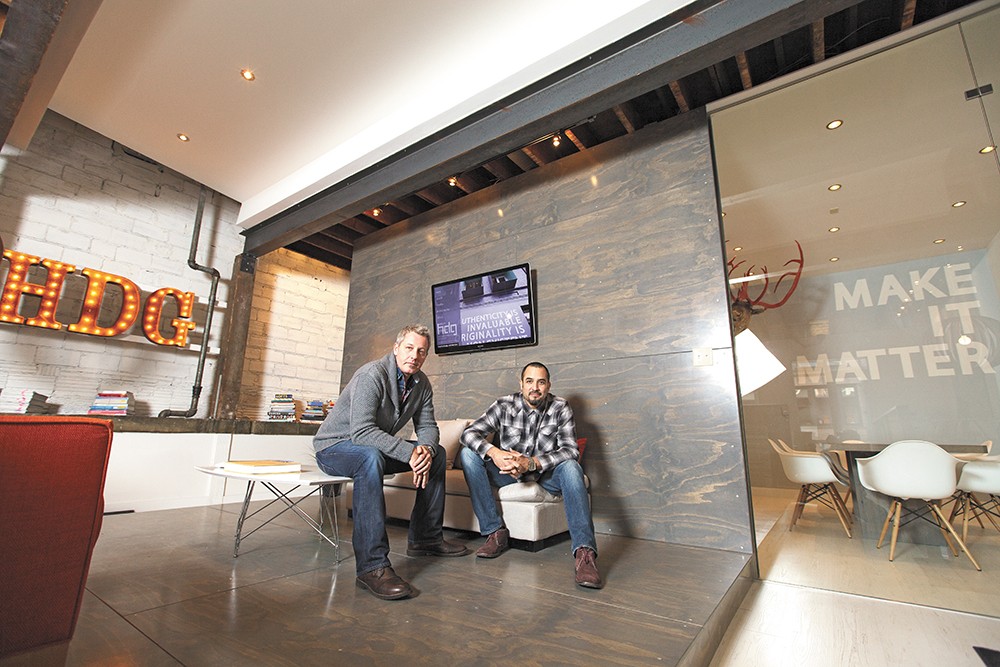 The new studio is sexy. Sure, it's a small building tucked between the vacant Ridpath and the vacant Blue Spark, but that makes it an ideal location for the bold vision of Josh Hissong and Armando Hurtado.

"We make it good," Hissong says.

When the company moved in this summer, the facade was painted matte gray with the bold slogan "proof design is sexy." Inside and upstairs, the studio is bright and airy with an elevated lounge area where clients often just come to hang out with their laptops. Out on the tiny roof deck, accessed through a glass door off the closet-like bathroom, a sign is hung strategically in view of the toilet: "DO EPIC SHIT."

The hip playfulness of the space initially disguises the fact that this is a serious office where serious work gets done, where 80-hour weeks are typical and discussions about ideas can sound a lot like arguments.

And they've been busy — in nearly three years since Hissong and Hurtado joined forces as HDG, they've transformed expectations about what restaurants in Spokane should be like.

They've built, designed or renovated an impressive list of establishments that includes Revel 77, Sapphire Lounge, Fire Artisan Pizza locations in both Spokane and Coeur d'Alene, Borracho Tacos & Tequileria, Volstead Act, Rusty Moose in Airway Heights and Top of India. Among those coming soon: the Boiler Room on the North Side (a ground-up construction), Crafted Taphouse in Coeur d'Alene (a renovation of an old muffler shop) and Nudo, their own Asian noodle shop project in the former downtown Spokane Berg's Shoes location. Their diverse projects are modern but warm, characterized by openness, creative textures, unique fixtures and smooth transitions from indoors to outdoors.

"A brand-new restaurant deserves and needs to have that eye-catching look that fits the ambience and the flavor of their food," Hurtado says.

Restaurants are by no means the only clients HDG takes on, but it's how they got started and still accounts for more than half of what they do. That's partially because the whole process for restaurants is complex and not every builder out there can do it. And it's also because Hissong and Hurtado have the experience to do it very well.

Suddenly, a man appears at the top of the stairs.

"I'm opening a restaurant, and I'm trying to find a designer," he says.

"I think you walked into the right place," Hurtado says.

Looks are important — they'll be the first to say it — but much of what HDG does is invisible to diners. It takes good design, good food and good service to make a successful restaurant, Hissong says, and he would know. He and his wife own two restaurants in Spokane — Wasabi Asian Bistro on the Northside and Ginger Asian Bistro on the South Hill — with plans to make it four with the addition of Nudo and a second Wasabi in the Tri-Cities. Hissong grew up in Post Falls, but spent his twenties managing restaurants in Los Angeles and worked as the lead designer for Spokane Restaurant Equipment after returning to the Northwest.

As a restaurant owner, he knows exactly what can go wrong and what "pisses off the cook." He knows how design details can improve service, and it's that aspect that has ruined the dining experience for him at some restaurants HDG didn't design.

"I can see the functionality screwing up the servers' night, and doing extra work that they shouldn't have to do," he says, "had the place been designed with function in mind and not just aesthetics."

HDG often ends up advising restaurant owners on everything from menus to staffing levels. A lot of clients don't have giant budgets for graphic design, so HDG will help with that, too. In return, clients have to trust that Hissong and Hurtado know what they're doing. They have to trust that HDG knows what they want better than they do. The client is not always right.

"It's our role to fight for what they hired us to do," Hurtado says.

"And we do fight," Hissong says.

They say Matt Goodwin, who owns the Volstead Act and the soon-to-open Boiler Room, is an ideal client — he'll stop by the office without even asking how his projects are going. Goodwin says he knows what he's good at, and he's happy to leave what he's not good at to them.

"I just let them go," he says. "They definitely have an edge to their work, and they see things differently than other architects and designers."

Their work has been described as very "not-Spokane," which is really just a way to say that Spokane is changing. Looking out the windows from inside their studio, it feels like you could be in any city in the world. But Hissong and Hurtado see all of the Inland Northwest the way they see their studio, as a place where they can keep busy and make a statement.

"Coming back from a visit at one point 12 years ago, I, for the first time, saw this area as something that not only was growing, but was gorgeous to begin with," Hissong says. "We have so much here that we don't have in other cities." ♦