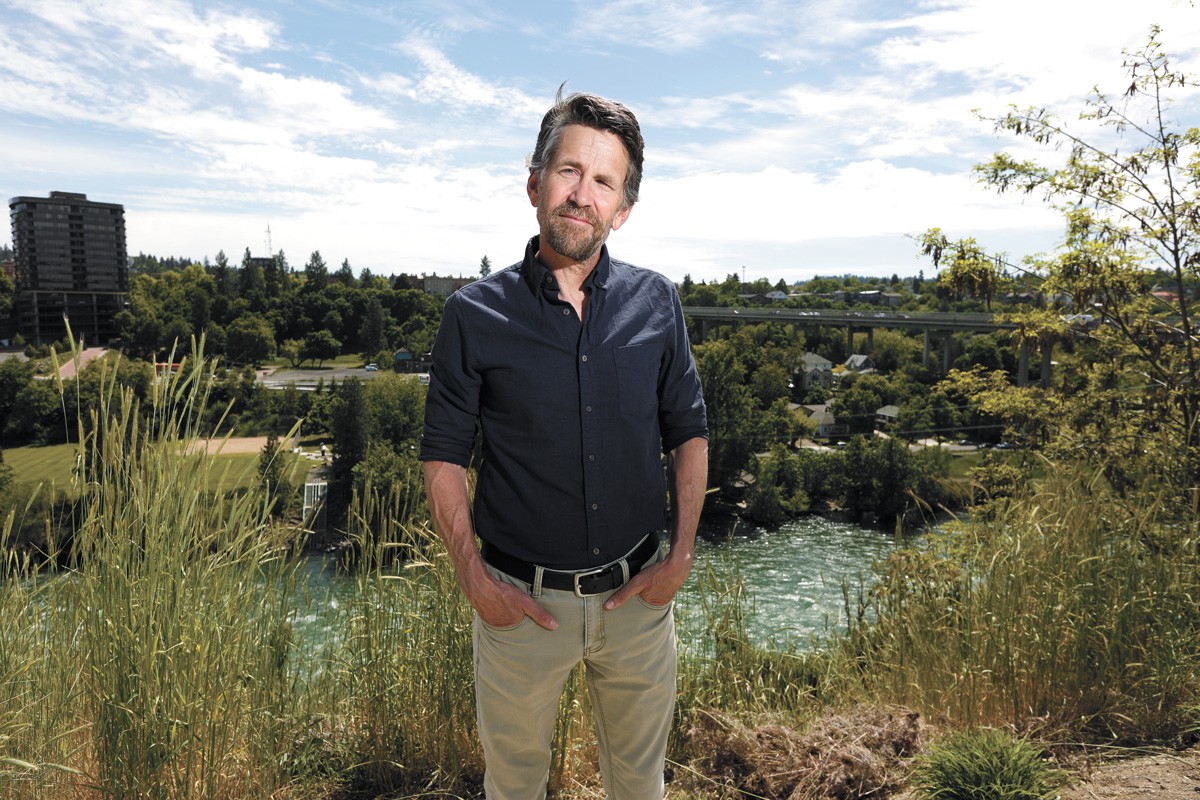 Riverside Avenue is packed. Not just the sidewalks, where people cluster in front of nearly every storefront and building entrance, but Riverside itself. In the middle of the street, Spokanites gather in groups large and small, some inside the trolley car tracks and some alongside as the trolleys move east and west on parallel lines. Several of the buildings remain recognizable to a 2020 eye, and signs for casinos and Coca-Cola ("Delicious! Refreshing!") decorate some of them. Several horse-drawn carriages and solo riders on horseback intermingle with the trolleys and locals on foot.

The photo is from 1911 and credited to W.D. McLellan, captioned "A Busy Street in Progressive Spokane." It's the kind of vibrant downtown scene that current city leaders can only dream about, even before the pandemic. And it's a slice of Spokane history that even a born-and-raised guy like author Jess Walter didn't know much about growing up.

Walter picked up a postcard with McLellan's photo years ago at Atticus, a downtown coffee shop, and kept it in the carriage house-turned-writing lair in his West Central backyard. He'd look at it now and again, and in many ways it helped inspire his raucous new novel, The Cold Millions.

"It was that photo, that picture looking down Riverside almost from the old Review tower, I just kept finding myself thinking, 'What's going on?'" Walter says. "All those people, where are they going? What's happening? Why isn't that the city I live in?"

Walter for years kicked around the idea of a novel set in the early 1900s in Spokane, and he started researching the era and creating characters that show up in The Cold Millions as far back as 2008. But he set that work aside to do things like finish his 2012 New York Times best-seller Beautiful Ruins or work on screenplays or short stories. He started work on another novel but went back to what became The Cold Millions in 2015.

"I was just so compelled by it," Walter says. "That picture just kept saying, 'Write about me.'" 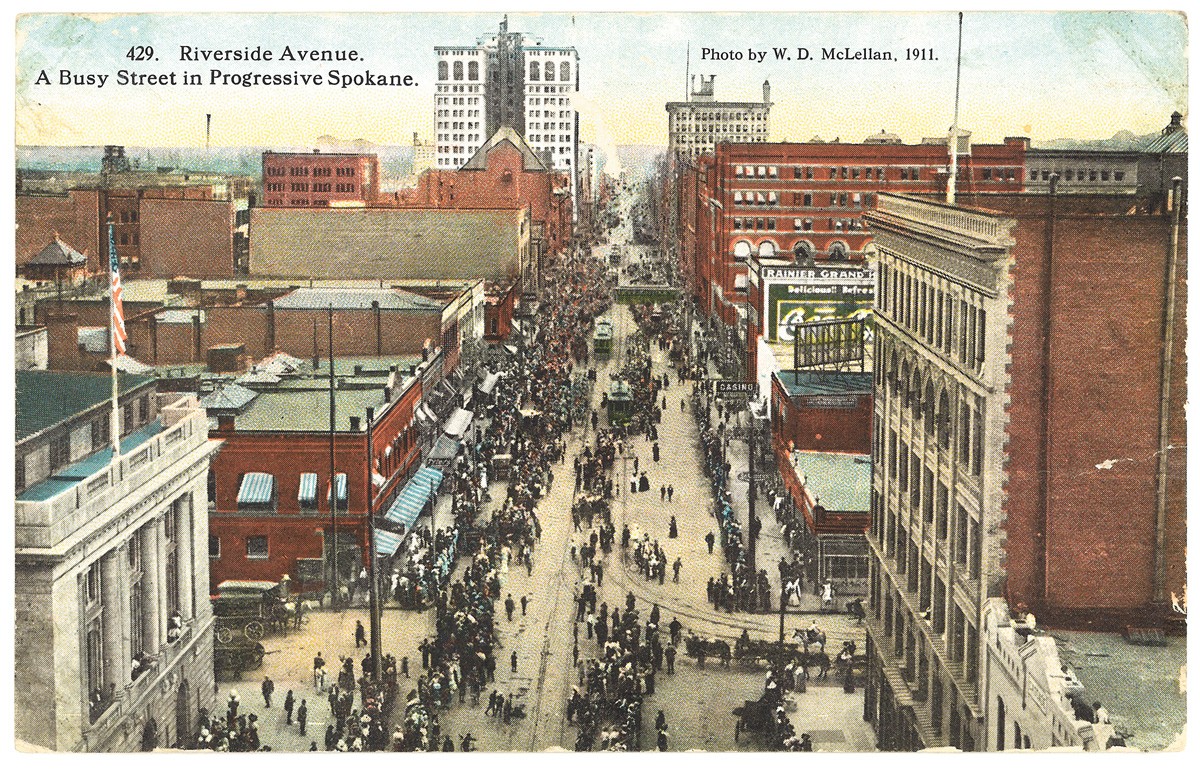 If you visit the city of Spokane's website right now, you'll find a "history" section that's all of four paragraphs. Ten sentences. You'll learn that the region's Native Spokane tribe inspired the city's name. You'll read about the massive 1889 fire, about when the old (and new!) city hall buildings were constructed, about the '74 World's Fair and the creation of Riverfront Park. Oh, and you'll learn Spokane is the second-biggest city in Washington.

That's it. That's the history.

Walter grew up in Spokane Valley and didn't learn much more than that in school. It was only later, working as a reporter at the Spokesman-Review, when occasional trips into the paper's archives to read century-old stories revealed a more fascinating history of his hometown.

The Cold Millions, available everywhere Oct. 27, takes place mostly over the course of a just few weeks in the early 1900s when the scrappy itinerant workers of a nascent labor movement and the region's wealthy corporate overlords (and their supporting police department) clashed — on the streets, in the city's newspapers, even in Walter's characters' bedrooms. In 1909 the Spokane City Council banned speeches on downtown streets in an effort to limit labor strikes, and the Industrial Workers of the World (aka, the "Wobblies") reacted by calling for workers to descend on Spokane, get on soapboxes and fill the city's jails in a massive example of civil protest. Hundreds of Wobblies heeded the call, and historians deem that era one of the first free speech fights in the country.

The Cold Millions is a blend of fact and fiction, and a ripping read full of dirty cops and hitmen, sexy stage actresses and shady club owners, heroic idealists and disturbing double-crossers — all of them trying to make a go of it in Spokane when it was a boomtown in transition.

It's always gripping and often hilarious and explores to varying degrees themes and issues — the chasm between rich and poor, sexism, racism — that should resonate with modern readers.

"After Beautiful Ruins, I kind of had this desire to write a big adventure story," Walter says. "And I've never written a Western, but this felt almost as close to a Western as I could get. I could have gunplay, and these big, violent characters. And politically, I could write about economic inequity now without being dogmatic. I could do it in sort of a metaphoric way."

Walter's been entranced with that era for a long time, noting that "when you live in Spokane, it's like the ghost of 1910 is everywhere." He lives in a 1907 house; his grandfather arrived in the area by hopping a train, the preferred mode of transportation for The Cold Millions' centerpiece brothers; and, Walter says, he comes from a "labor, Democrat family."

"Most places have such a boring official history," Walter says. "'This guy settled here, and he started a lumber mill.' And that is the true history. What I've written — well, all fiction is speculative fiction in some ways — there are real things that happened. The book is framed by the deaths of two police officers that really happened. And, of course the labor riots and the Wobblies. But the rest of it is just speculation and fanciful creativity."

As The Cold Millions unspools, Montana brothers Gig and Rye Dolan show up in Spokane looking for work, only to be swept up in a series of labor protests, and a police investigation into an officer murdered while investigating burglaries in the posh Cannon Hill neighborhood. While Gig is stuck in jail as one of the protests' alleged instigators, Rye finds himself released and suddenly caught up trailing famed 19-year-old activist and pioneering feminist Elizabeth Gurley Flynn, barnstorming the region from Missoula to Seattle to raise money for the labor cause. All the while Rye is trying to figure out how to get Gig out of jail, a pursuit that leads him to interact with mining magnates, hired thugs and an exotic dancer, Ursula the Great, best known for using a live cougar in her act.

Walter is an entrancing tour guide of yesteryear Spokane throughout The Cold Millions, putting the reader inside Spokane beer halls and jail cells, North Idaho mining camps, glitzy theaters and the tiny abodes of the working women in the city's red light district. ("If you look on the floor at Zola [a popular downtown bar], you can still see where the little rooms were," Walter says.) 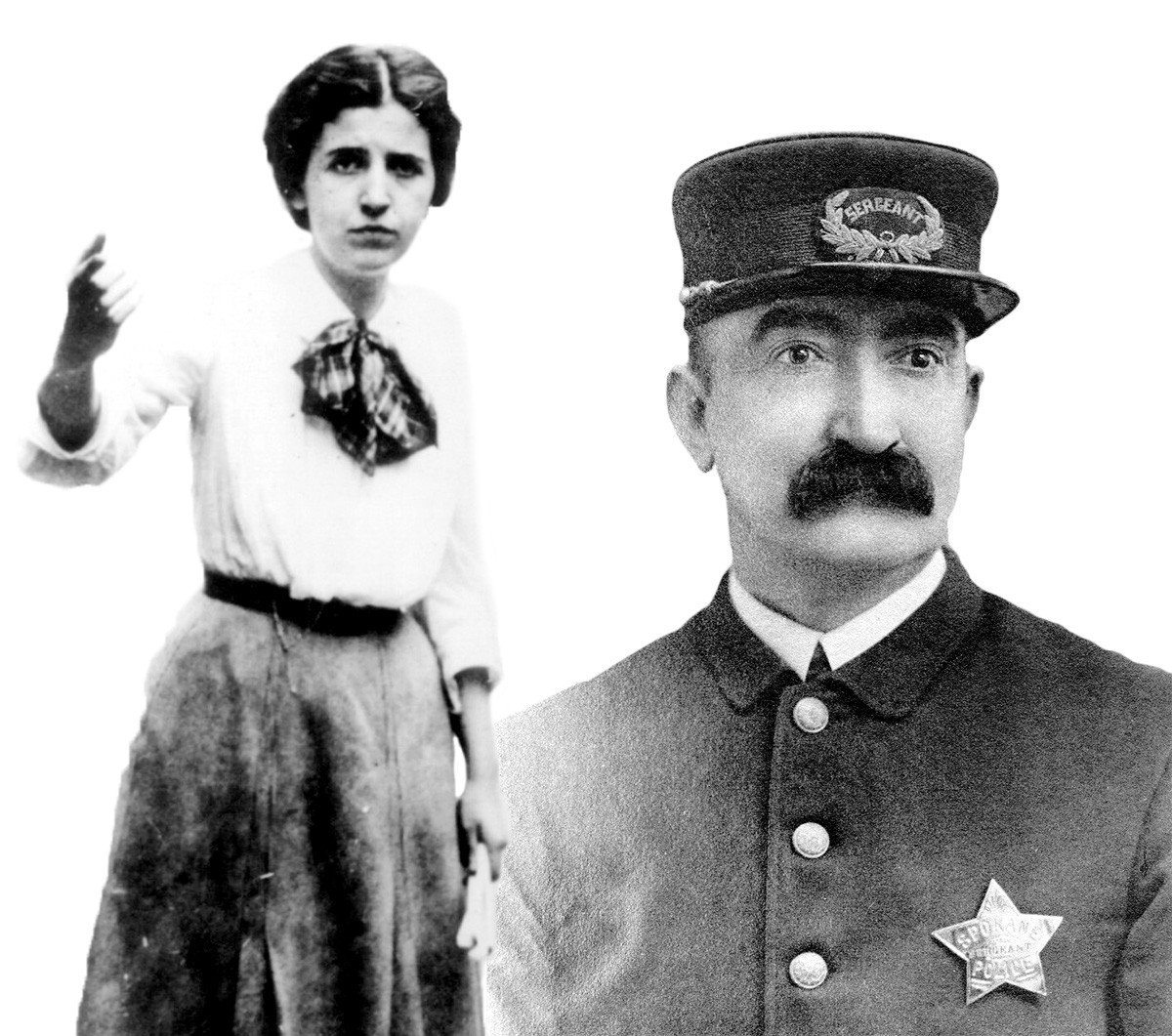 "Doing all this research, I'd map all the places and I'd just ride my bike to all the places that appear in the novel," Walter says. "I get to the part where John Sullivan, the acting police chief, gets killed, and it's 1318 W. Sinto. So I hop on my bike and ride by, and I swear to God, that f—-ing house has not changed. There might still be a bullet hole. I just lost my breath. This history, you just see it."

You can also hear it in Walter's prose, whether in his descriptions of the scenes or the words of his characters. When he started playing with Gig and Rye years ago, the voices of those two brothers, reflective of their lot in life and their Western roots, thrilled Walter enough to want to tell their story.

"The language of that period, bindlestiffs and just the language of hobos, and of that whole economic system just struck me as so rich," Walter says. "It's like these notes on the piano. You start hearing this melody of these workers and the brothels, the tavern girls. It's almost like a dream state."

The Cold Millions' fusing of fact and fiction works remarkably well, to the point where it's easy to find yourself thinking you're reading the most thrilling history book imaginable. Its cast of characters — from drunk hitmen to nouveau riche assholes, sympathetic strippers to earnest labor activists — populate an electrifying action-adventure tale. But they also help illustrate some Spokane history Walter is proud of; namely, the labor activists who literally hopped on soapboxes throughout downtown to give speeches supporting workers' rights, even in the face of violent anti-labor thugs and arrest by Spokane cops.

"To me it meant something that the birth of nonviolent protest happened in Spokane," Walter says. "This was the first successful use of these sorts of tools. I took a very nonviolent protest and wrote a novel full of violence. Which I think happens behind the scenes.

"It wasn't anything I grew up learning about, but I did long for a time when the promise of labor was... you know, the decline of unions in the last 40 years is one of those untold stories. The loss of the working class to the Democratic Party I think has been a huge blunder. So those kinds of things plant themselves, and I found myself looking for a time when collective thinking wasn't scoffed at. You go back to these origin stories, and this just felt like the origin story of labor."

As his new novel The Cold Millions hits the public, Jess Walter reflects on his old books

In some ways, the world of The Cold Millions is the origin story of Jess Walter as we now know the 55-year-old author. He wouldn't be here to tell this story if his grandfather, also named Jess Walter, hadn't hopped a train and arrived in Spokane as an itinerant worker in the 1930s. "He'd tell me these stories, and it sounded so adventurous to me," Walter says. "That sense of adventure and sense of economic unknown. You venture into a town and you hope for the best, right?"

Jess Walter the grandfather made it work in Spokane nearly a century ago, and Jess Walter the author mined his hometown for what turned out to be an incredible glimpse of its history through The Cold Millions. While Spokane will undoubtedly pop up in Walter's work again, it will never be quite like this.

"I think a novelist kind of owes it to him or herself to write about the most interesting period of her place or his place," Walter says, "and this just felt like when Spokane was so vibrant, and just humming with so much danger."♦