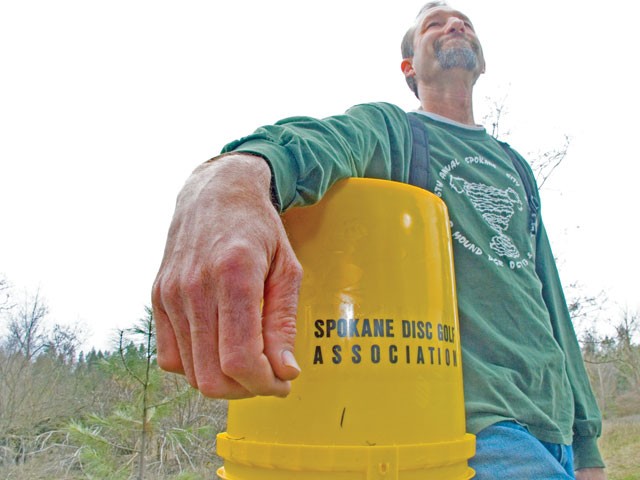 The Frisbee saved High Bridge Park. Well, Frisbee golf, technically. The extra foot traffic from a disc golf course, the theory goes, drove out most of the criminal elements — sending those looking for drugs or anonymous hookups elsewhere.

So when the Spokane Disc Golf Association came looking to expand their course offerings near High Bridge Park, the city parks department thought of People’s Park — another location with a reputation for drugs, public nudity and sex in the bushes.
But when temporary disc golf goals began popping up in People’s Park last month, not everybody was pleased.

“What I found were these large structures placed off the trails, and people tramping off the trails, breaking branches,” Peaceful Valley neighbor Bernadette Vielbig says. “I find spray paint all over the ground, with arrows leading to the path. How is this considerate to the natural environment?”

There are other big concerns. Parking in the area is limited. Neighborhood president Patty Norton is also concerned that all the disc golf activity may be violating state law by disturbing an archeological site. Until 1881, People’s Park had long been a gathering place for the Spokane Tribe. Spokane Tribe heritage coordinator John Matt says area archeologists have found tribal artifacts from 7,800 years ago in People’s Park. The attraction of a Frisbee park, Matt worries, could also draw artifact looters.

Randy Abrahamson, a tribal preservation officer, says there’s not much worry about the actual course doing damage, as long as the buckets only skim the soil’s surface.

For Peaceful Valley residents, however, most their anger comes from the way the course arose without warning.

“At first when I heard they were going to install a disk course, I was pretty pissed off … I saw it on KXLY News 4,” says neighbor Matthew Phillipy. “What the hell? I live in the neighborhood. I work with the parks [department] on a weekly basis.” For two years, Phillipy has been on a committee working on plans to restore parks in the Peaceful Valley area.

Yet the Spokane Disc Golf Association put up Frisbee golf buckets almost instantly, with nary a word to the neighborhood.

The Disc Golf Association, turns out, had been talking to the neighborhood council — but the Latah Creek council, the wrong one. Whoops.

Nothing about the course would be permanent, officials say. No holes would cross existing trails or be too close to the river. Eadie would call Abrahamson to make sure tribal significance was properly cared for. (At press time, he hadn’t yet.) Bike racks would be added, and SDGA members would park elsewhere. To combat litter, extra garbage cans would be added, and the SDGA would help empty them. On Wednesdays and Saturdays, the SDGA holds clean-up parties.

Kevin Sakus of the SDGA believes that most of the neighborhood’s residents now support the course. On Feb. 20, the Disc Golf Association held a fundraiser in the park. Many attendees were Peaceful Valley neighbors.

"Golf is like bike shorts," writes Rick Reilly. "It reveals a lot about a man."