Dishing Up a Big Assist

Coaches vs. Cancer gives basketball masterminds like Mark Few a shot at helping to win the really, really big one 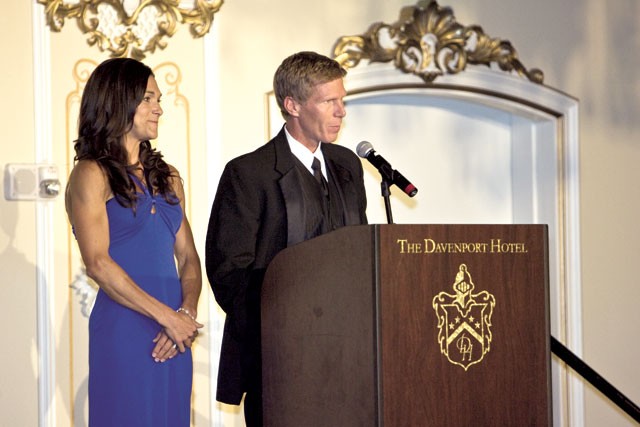 Mark Few has faced some epic teams over the years — UCLA, Memphis, North Carolina — but this one is the most imposing yet. With a relentless attack, this opponent spreads out and tries to choke the life out of you. But this is no game; it’s the deadly serious fight against cancer, and basketball coaches across the country have joined the battle. Gonzaga’s Mark Few and his wife Marcy have overseen one of the most successful Coaches vs. Cancer events anywhere, raising more than $3 million since their first event — and the West Coast’s — in Spokane in 2002.

“It’s hard to find someone who has not been touched by cancer — a family, a friend,” says Mark Few, “and, unfortunately, we’ve both lost family members to cancer.

“The greatest part,” Few continues, “is how much Spokane and Coeur d’Alene have given. It’s been amazing… it’s moving. It’s just a very moving evening.”

It all started back in 1989, when University of Missouri Head Basketball Coach Norm Stewart was diagnosed with colon cancer. He missed half of that season, but thanks to treatment and surgery he beat his cancer. The experience moved him to create Coaches vs. Cancer, starting by asking Tiger fans to make pledges for every three-pointer his team scored.

From there it took off, first in the hands of Syracuse Coach Jim Boeheim, who along with his wife Juli turned it into a weekend-long event, with a golf tournament and black-tie gala auction — the format the Fews adopted. It also has spun into the Suits and Sneakers weekend, when coaches wear basketball shoes during their games to raise awareness about early detection and ways to avoid cancer. In 2009, those games will be played Jan. 30-Feb. 1.

The effort has gone way beyond anything Coach Stewart could have dreamed — today nearly 500 college coaches are involved, along with 100 high school coaches; and since the charity was affiliated with the American Cancer Society in 1993, the total amount raised has topped $40 million.

But the Spokane event is in a class by itself. It’s the biggest Coaches vs. Cancer event in the nation, according to the American Cancer Society, and in 2005, Mark Few was awarded the Coaches vs. Cancer Champion Award. It has been chosen by Inlander readers as the region’s best charity event for the past two years, and outsiders love it, too, as it continues to attract big names in sports. This August, sportscasters Jay Bilas, Neal Everett and Sean McDonough are set to attend. Some of the money raised here goes to promising research, but much of it stays local to fund efforts like Camp Goodtimes for kids facing tough medical battles.

Few says it’s also been great for his players — they not only visit oncology wards during the season, but they also mingle with guests at the gala, all duded up in tuxes — “and it has brightened and enlightened their time here,” Few adds.

As for hosting the region’s swankiest event, Marcy laughs, giving credit to the event’s committee members and sponsors, adding “It’s kind of like a wedding. There’s only so much you can do in advance, and then it just hits.”

Coaches vs. Cancer, with a golf tournament at Indian Canyon and the black-tie gala at the Davenport Hotel, is Aug. 22-23. Call 242-8291 or visit www.gucoachesvscancer.com.