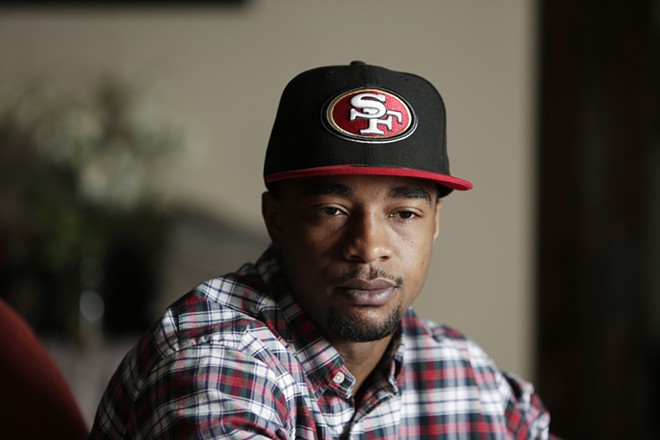 SHOTS IN THE DARK

A Spokane judge dismissed first-degree murder charges against LaSHAWN JAMEISON in June, but Spokane County prosecutors are appealing that decision. The Washington State Court of Appeals has agreed to weigh in.

Jameison, a former Eastern Washington University football player, was involved in a shootout near a North Spokane club that left one man dead earlier this year. The question now is: Even if Jameison did not fire the fatal shot, can he be held responsible?

Jameison was charged under Washington state's murder by "extreme indifference" law, which implicates someone whose actions create a "grave risk of death to any person" and "causes the death of a person."

In the early morning hours of Jan. 18, Jameison and a friend left the Palomino Club after a night of partying. That friend, Kwame Bates, got into a confrontation with another man, Anthony Williams, which spilled out into the parking lot. All three men armed themselves with handguns, according to police records. Jameison was not involved in the confrontation and crouched behind a nearby car as Williams fired the first shot. Eduardo Villagomez, 21, was standing on the street just behind Jameison and Bates. Villagomez was hit in the head by Williams' bullet and died. Bates returned multiple shots, and Jameison fired at least once in the opposite direction of the victim, according to video surveillance footage. Neither Bates' nor Jameison's bullets hit anyone.

When Spokane Superior Court Judge Michael Price dismissed the murder charge against Jameison, he wrestled with the line between murder and self-defense. Although reckless, Price said, there was no evidence to show Jameison's actions caused the death of Villagomez.

Spokane prosecutors, in their appeal, argue that Price's ruling sets a precedent, making it impossible to charge anyone as an accomplice to murder under Washington's "extreme indifference" clause.

Jameison, through his attorney Joshua Maurer, argues that prosecutors twisted Price's ruling in their request for an appeal, and misrepresented the narrative as it appears in surveillance video. (MITCH RYALS)

Lose a lawsuit in IDAHO, and you might be paying for the other side's attorneys' fees, thanks to a recent ruling by the Idaho Supreme Court that overturns decades of Idaho case law.

The "loser pays" system is common in civil courts throughout the world, but is at odds with the "American rule," which says that each side pays for their own lawyers unless a specific law allows otherwise. Only a handful of other states have similar laws, but with strict parameters.

Idaho has had one such law on the books since 1976, and the statute was further defined in a 1979 court ruling. However, that rule limited the court's discretion to award attorneys' fees to the winning side in cases "brought, pursued or defended frivolously, unreasonably or without foundation." In 1987, the Idaho legislature clarified its intent to "grant prevailing litigants in civil action the right to be made whole for attorney's fees and costs when justice so requires."

In its 3-2 decision, the high court says it can no longer ignore the legislature's intent.

Those four words — "when justice so requires" — giving courts much wider discretion to award attorneys' fees, have Idaho lawyers and legal scholars wondering about the future of the state's legal landscape.

In his dissent, Justice Roger Burdick writes: "I believe that the majority's analysis will further inhibit access to justice and tilt the table even further toward moneyed interests in our courts."

Walter Olson, a senior fellow at the Cato Institute, a D.C.-based libertarian think tank, praised the decision in a blog post this week as "consistent with the interests of justice." Olson argues that the loser-pay system effectively stamps out "speculative claims and defenses" and promotes settlements. He does warn against the risk that fees can vary wildly from courtroom to courtroom as the change takes place.

The Idaho Supreme Court delayed the new rule until March 2017, giving the legislature a chance to enact a new law. (MITCH RYALS)