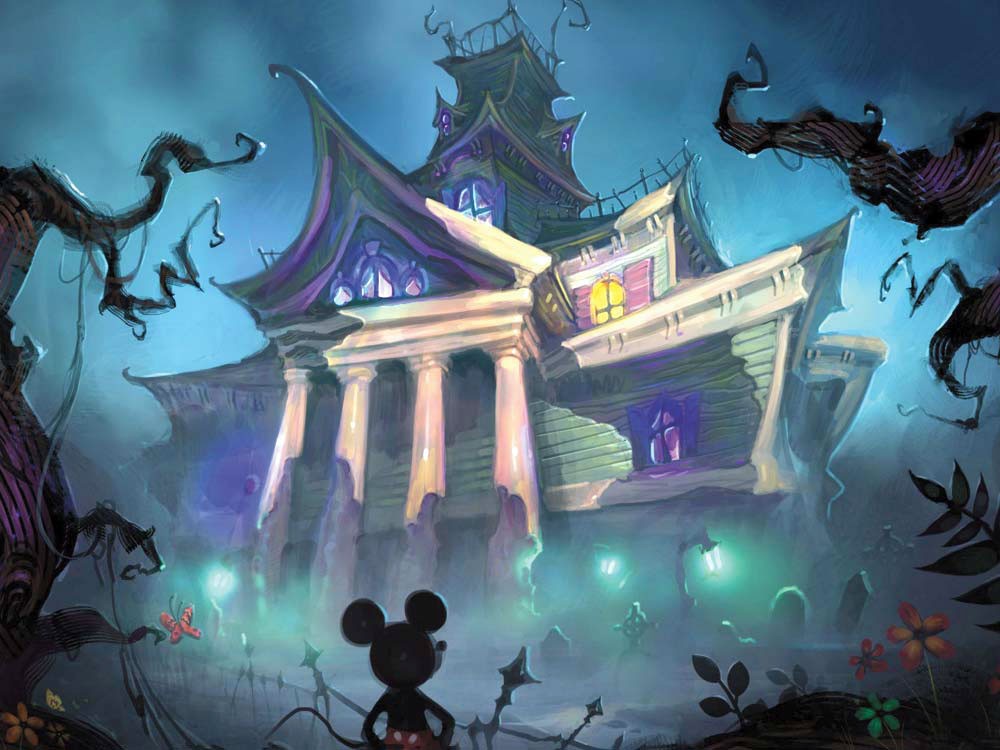 Right away I’m forced to choose: Will I be a creative, “good” Mickey? Or will I be a destructive, “dark” Mickey? Will I be Mickey Mouse, innocent hero beloved by billions, or a tough antihero animated for a new generation? Topolino or Mik3?

With my iconic ears, I could never be mistaken for Mario. But with my oversized toon shoes and hoppy demeanor, I look like Mario onscreen as I run, jump and tumble through obstacle courses that could have come from one of Nintendo’s darker games. Instead of a Mushroom Kingdom, however, I’m caught in a warped version of the Magic Kingdom — a shadow-splashed version of Disneyland for forgotten Disney characters. Called Wasteland, it is ruled by Oswald the Lucky Rabbit, a pre-Mickey cartoon with perkier ears and a chip on his shoulder.

Due to a mishap with some paint thinner, Wasteland is now literally wasting away. Its brightly inked and painted landscapes are being blotted into oblivion by a mad scientist and a gang of dark, dripping monsters. It’s up to me to combat this threat by either painting Wasteland back to normal, or thinning away its remains. Like Mario in Super Mario Sunshine, I can shoot fluids — paint and thinner — as I run and jump around. These cause dramatic visual changes as I sponge away portions of the landscape to uncover hidden passages and reconfigure Wasteland’s topography.

Of course, I can also douse the same paint thinner on my enemies, erasing them into oblivion. Or I can coat them with paint, restoring color to their inky hearts and transforming them into friends. I can run around Wasteland rebuilding bridges and helping hapless toons repair their forgotten kingdom. With enough paint, I can restore color and light to this new Disney land.

There is a path laid out for me in Epic Mickey, but I’m free to determine how I travel it. If I’m aggressive and goal-oriented, I might fight more battles. If I’m helpful and curious, I might bypass some key conflicts altogether. For years, Mickey has expressed only amiable, innocent fun —an icon instead of a hero. Finally, in Epic Mickey, he is free to be whatever kind of mouse I want him to be.

THE GOOD: Most of Epic Mickey is set in the three-dimensional world of Wasteland. But linking the various parts of Wasteland together are two-dimensional levels derived from old Mickey Mouse cartoons. There is no action here that Mario hasn’t already taken — or Kirby, Rayman or Sackboy, for that matter. But the simplicity suits Mickey’s style. More than any other parts of Epic Mickey, these two-dimensional sequences feel the most like living cartoons.

THE BAD: Most of the time I was forced to rely on the game’s automatic camera movement during my three-dimensional jumping and exploring. And more than once — OK, a lot of times — I found myself wailing as I fell down a chasm that I was unable to see. 3-D environments are impressive examples of virtual worlds, but if you can’t see them well enough to navigate, no amount of visual splendor will make them playable.

THE BOTTOM LINE: The mouse roars in Disney Epic Mickey.