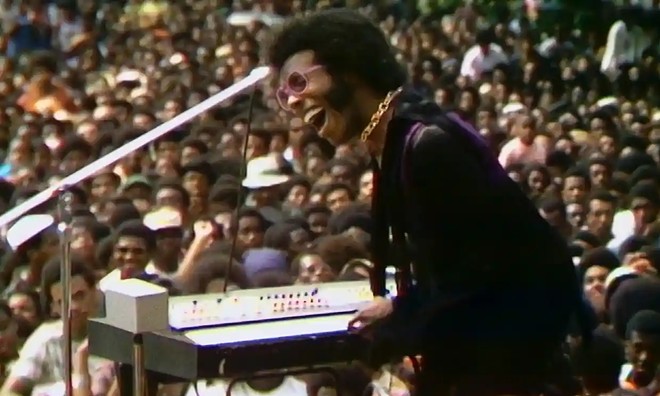 Sly Stone in the concert documentary Summer of Soul, which recently had its world premiere at the Sundance Film Festival.

I've never traveled to Park City, the tiny Utah resort town where the Sundance Film Festival happens every winter. But this year, Sundance brought Park City to us, and I was one of countless critics and movie fanatics who tuned in to the online version of Sundance 2021 that started last week.

Although I desperately miss the in-person moviegoing experience, there are a few benefits to a virtual festival. Because each screening at Sundance has a four-hour viewing window, I'm not rigidly beholden to the schedule. Having pause, rewind and closed-captioning features is also a big plus. And waiting on my couch for a film premiere to start is slightly preferable to standing in line out in the cold.

I took full advantage of Sundance's press access, and I saw 21 features — which seemed fitting for 2021 — over the course of five days. I've boiled all those hours down to a handful of films that are amongst the best or most noteworthy titles, all of which you'll no doubt be hearing about as they're officially released in the coming months.

CODA
CODA
This coming-of-age crowd-pleaser is arguably the buzziest of this year's Sundance crop, having been acquired by Apple for a record-breaking $25 million and sweeping the festival's top awards. It's about a shy teenager (Emilia Jones, in a breakthrough performance) who's the only hearing member of a deaf family ("CODA" stands for "child of deaf adults"), and how she finds her confidence in a high school choir class and attempts to liberate herself from her full-time role as her parents' full-time interpreter. It swings wildly between raw honesty and cutesy predictability, but its charms tend to make up for its corniness.

JUDAS AND THE BLACK MESSIAH
I'll be writing more about this next week when it hits HBO Max on Feb. 12. To keep it short and sweet, this was probably the best narrative film I saw at Sundance, an electric historical drama about the Black Panthers and the FBI that features stunning work from Daniel Kaluuya and Lakeith Stanfield.

Mass
MASS
One of the running themes of this year's festival was actors making their directorial debuts, and the first (alphabetically, at least) that I saw is from Fran Kranz, best known as the nerdy stoner from The Cabin in the Woods. Mass, his gut-punch of a drama, traps us in a church conference room with two couples — one married, one divorced — who appear to be linked by a shared trauma, and we learn more about their pasts and their relationships as their conversation intensifies. It has the immediacy of a theater piece, with a quartet of sterling performances from Jason Isaacs, Martha Plimpton, Reed Birney and the unassailable Ann Dowd.

MISHA AND THE WOLVES
Misha Defonseca's memoir made her a cause celebre in the 1990s, and understandably so. As a child in war-torn Belgium, she claimed to have been given a new identity after her parents were arrested by Nazis, eventually escaping an abusive foster family and traveling on foot through the wilderness, where she was welcomed in by a pack of wolves. If it sounds incredible, that's because it was, and this documentary takes us through the twists and turns of an elaborate literary hoax. Netflix has acquired the U.S. distribution rights.

ON THE COUNT OF THREE
Another film by a performer-turned-director, this time by comedian Jerrod Carmichael, playing a suicidal guy who springs his best friend (Christopher Abbott) from an institution for a score-settling, vengeance-seeking joy ride that will inevitably end in their deaths. To make a dark comedy out of this material obviously takes nerve, and I'm still sitting with this one: It pulls off some of its dicier narrative gambits and doesn't succeed with others, and its ending is supposed to convey the unpredictability of real life but instead feels too abrupt. Still, Carmichael's film will no doubt inspire countless think pieces when it finally hits theaters.

Passing
PASSING
Actress Rebecca Hall steps behind the camera for the first time with this gentle period drama set in the late 1920s and based on a groundbreaking novel by Nella Larsen. It stars Tessa Thompson as Irene, a Black doctor's wife who keeps her head down whenever she leaves her Harlem neighborhood. One afternoon, she bumps into a childhood friend named Clare (Ruth Negga), who is also Black but living as a well-off White woman, and their friendship forces both of them to re-examine their positions in the world. It's melodrama in a minor key, shot in beautiful black and white and dealing with still-relevant, complex issues in subtle ways.

SUMMER OF SOUL (...OR, WHEN THE REVOLUTION COULD NOT BE TELEVISED)
The same summer that man walked on the moon and Woodstock became a hippie touchstone, the Harlem Cultural Festival took over New York's Morris Park with six weekends of music and unity. The festival was filmed but the footage never released, and the event was seemingly scrubbed from history books. Summer of Soul, directed by Roots drummer Ahmir-Khalib "Questlove" Thompson, unearths those old tapes and breathes new life into them 50 years later, contextualizing the performances with contemporary talking heads. The concert footage itself is unbelievable, featuring all-time greats such as Stevie Wonder, Sly and the Family Stone, Gladys Knight and the Pips, Nina Simone and more. The film won Sundance's top documentary awards, so odds are good it'll be streaming sometime this year.

Here is a complete list of the Sundance 2021 award winners.