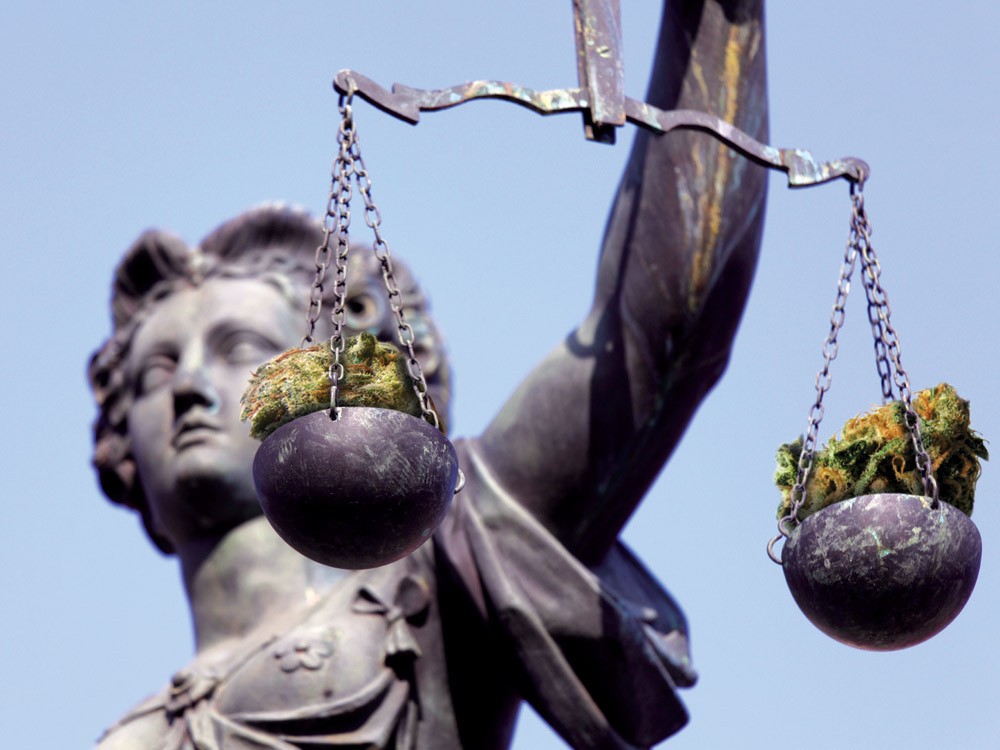 Scott Shupe sits jammed in the back row of a crowded Spokane County courtroom. The air’s grown hot and stale, and the din of the courtroom keeps ramping up, as prosecutors, defendants and other attorneys noisily await their turn in front of Superior Court Judge Michael Price, who is rushing through 90 pre-trial hearings dealing with a variety of criminal offenses.

Shupe doesn’t say a word. He’s just waiting for his own hearing.

His attorney’s up there somewhere. So is the prosecutor who wants to slap him with a handful of felonies.

About a half-hour after Price takes the bench, Shupe’s case comes up for all of 45 seconds. Price decides it will begin next week, and he moves on. Shupe steps out.

Shupe’s trial could decide the future of medical marijuana dispensaries in Washington by handing local law enforcement the tools needed to shut down all of the 30 estimated dispensaries in the region.

But it’s not the only action being taken to decide the future of medical cannabis. Across the state, in Olympia, legislators are working at the issue from the opposite angle.

Last week, the state Senate passed by a vote of 29-20 a bill that would explicitly legalize medical marijuana dispensaries and the farms that supply them. The bill is now being discussed in the House before it could head to the governor’s desk.

As the bill and the litigation wend their ways to their respective and opposite endpoints, many Washingtonians — patients, law enforcement officers and others — have the same question: Can people sell this federally prohibited, voter-approved substance or not?

Shupe is the former co-owner of the Change dispensary. In 2009, Change became the first medical marijuana shop in Spokane to be raided and shut down by local law enforcement.

Shupe faces charges of delivery, possession and manufacture of a controlled substance — all felonies that might come with prison time. (Change’s other owner, Christopher Stevens, plans on testifying against Shupe, which will lessen his own charge to a relatively minor misdemeanor.)

The trial, which is scheduled to begin March 14, is expected to last just a few days, but it has long been anticipated by local cops as the state’s first test case.

“Hopefully, we can get some guidance pretty soon,” says Lt. Gerry Fojtik, who is on the Spokane County Sheriff’s investigative task force and heads the sheriff’s undercover drug unit. “Right now, [dispensaries are] selling something that’s illegal. And there’s a lot of money being exchanged.”

With a favorable conviction, Fojtik says, law enforcement could shut down the area’s other dispensaries, something they’ve waited to do for financial reasons: If they raid a shop, they could be liable for a dispensary’s plants and equipment should the courts decide dispensaries are allowable.

Due to the lack of any statewide registry, it’s difficult to determine how many dispensaries exist in Washington, let alone Spokane. Estimates for Spokane vary from a dozen to 40, with a consensus that there are about 30 dispensaries operating in the city. WeedMaps.com, a website that allows users to review dispensaries and their wares, lists 21 pot shops in or near Spokane. There’s the THC Pharmacy, the Greenhouse, Medical Herb Providers and Club Compassion, among others.

The proliferation of dispensaries has earned Spokane the nickname “Spokamsterdam” in some circles. But it was a much different scene on Sept. 10, 2009, when Shupe was arrested.

Back then, the handful of dispensary owners argued that they were operating in a legal “gray area”: State law didn’t say dispensaries were legal, but it didn’t explicitly outlaw them, either.

Among the shops at the time, Change was the largest and most successful. In August 2009, the shop boasted more than a thousand members — more than all the other dispensaries combined. At that time, however, the shop felt more like a hangout than a clinic, with people laughing and music thumping in the back room, where cannabis was supposed to be purchased one on one.

An affidavit for the search warrant shows that law enforcement was first tipped off about the dispensary by a local TV report. Subsequently, police put Shupe under months-long surveillance. They followed Shupe home, installed a camera outside the shop to monitor the activity of his business and pulled over the shop’s customers for nominal license infractions.

Finally, after four months of investigation, police obtained their search warrant and raided Change at 10 in the morning. At the same time, authorities raided three houses connected to the dispensary and arrested several people, including Shupe and Stevens. Detectives working the case warned other dispensaries that the investigation was continuing and that the shops should “terminate their businesses.”

Shupe’s attorney, Frank Cikutovich — well known for his work relating to marijuana — says the outcome of his case could have serious ramifications.

“This will answer the question whether or not you can deliver [marijuana] to multiple patients,” says Cikutovich, whose own business cards come with a pack of rolling papers. “But I would like to convince the state: ‘Why would you want to mess with my client when everything’s changing?’”

Earlier this legislative session, two major marijuana bills were being discussed — one that would have fully legalized pot and allowed it to be sold in state-controlled liquor stores, and one that hammered out regulations for the burgeoning dispensaries that were operating across the state.

Only the last one survived. “The voters approved the dispensaries to be legal,” says state Rep. Andy Billig (D-Spokane). “But how the dispensaries should operate isn’t clear. I think it’s going to be helpful for everybody — law enforcement, dispensaries, patients — if the laws are clarified.”

Billig’s sentiment rings true across the aisle. “The citizens of the state had decided previously that marijuana should be available as a treatment,” says Sen. Michael Baumgartner. “The current system … is confusing and problematic and people don’t know what their rights are.”

The current version of the bill is not lacking in clear steps for regulating dispensaries. The entire process — from growing to processing to labeling — is made explicit.

Perhaps more importantly, people with medical marijuana recommendations would have stronger protections against arrest. But even with this protection, patients would have to follow a number of new rules. Specifically, they’d have to register with the state’s health department and post a copy of their authorization “next to cannabis at their residence,” according to the official staff report done for the legislation.

By July 1, 2012, the director of the state Department of Agriculture would have a number of requirements to fulfill, including how the state inspects and grades cannabis. The department will determine such factors as THC concentration, the sizes and dimensions of containers the pot will be stored and transported in, and if the cannabis was grown organically or not.

It’s this type of specific regulation that many say has been lacking for more than 12 years — since voters first approved the use of medical marijuana.

On top of the proliferation of dispensaries, some say it was the state’s dire financial situation that made codifying the shops a priority. Though the bill says that dispensaries must become registered nonprofits, the state will still collect sales, property and B&O taxes from them.

Aside from taxes, the bill’s official fiscal note shows that the departments of health and agriculture will bring in almost $21 million over the next six years just by administering the law.

Baumgartner says revenue for the state wasn’t the reason for the legislation. But he did say that the topic wasn’t dead.

“That’s an entirely different discussion, whether we should legalize marijuana for revenue,” he says. Asked if he thought pot should be made legal, he said he was “very cognizant of the tremendous effects it has on society.” But he didn’t say no.

“I would like to see another state do it first,” he