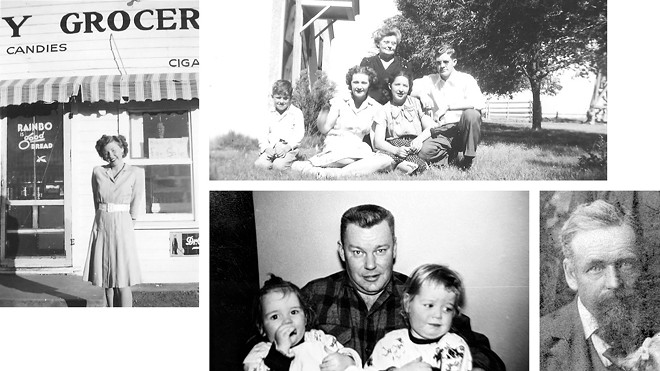 At a recent performance of Hamilton, the lump in my throat didn't form until the emotionally charged song at the end, "Who Lives, Who Dies, Who Tells Your Story." The lyrical conclusion struck even harder as I applied the question to myself.

I don't know if anyone will be telling my story 200 years from now, either in history books or by my family's descendants. Both seem unlikely. I often reflect on the subjects of mortality, remembrance and heritage — run-of-the-mill existential dread as a childless 30-something. I was raised around a side of the family that placed high importance on "passing things down" and knowing the stories of those who came before us.

The ancestors I know best are on that side, yet that knowledge centers just two generations back, on my paternal grandparents, who grew up during the Great Depression and World War II.

Before opening an account with the online genealogy service Ancestry, I knew next to nothing about my mom's side, the Colville line. This knowledge gap has since been swiftly filled.

As you start building a family tree on Ancestry, the site begins finding connections to the public records (birth, marriage and death certificates, and much more) users can access. This, paired with others' public research on overlapping family members, causes little green boxes to begin popping up above individual entries on the tree that say "potential mother" and "potential father."

As you expand your tree by accepting these suggestions, more green boxes appear until you hit a dead end. It felt like playing a video game and unlocking a new level or ability, over and over. (A major caveat is that these connections could be erroneous, and the further back you go, more verification is often needed.)

I spent the first several evenings chasing these green boxes to see how far back I could trace my ancestors, eventually getting to the mid- to late-1500s in England, Scotland, Ireland, Germany and Norway.

On both sides, my family's roots in North America date to the colonies. Some of those ancestors were born here a century or more before the United States achieved its independence.

Despite following this trail of crumbs, hungry for discovery, I've unfortunately not learned much else about them besides dates, names and places of birth and death.

My sixth great-grandmother on my father's side, Experience Lawrence, was born in Massachusetts colony in 1711. That's all I know about her.

My fifth great-grandfather on my mother's side, Jacob Schoff, came to Boston from Germany in 1752 and served during the Revolutionary War alongside three of his sons. One of them, John Schoff, was with George Washington at Valley Forge.

As time marches on, details about more recent family connections are easier to find. My great-grandfather, Irwin Lawrence "Tim" Lien, on my mom's side, served with the U.S. Navy Seabees during World War II. I learned this via a newspaper clipping with photos of him and his three brothers that someone else uploaded to Ancestry. Irwin's resemblance to my mom and her siblings is unmistakable. Great-grandpa Irwin tragically died in a solo plane crash at age 56 in 1968. His obituary says he was "stunting" and failed to pull out of a spin dive.

In time, I hope to piece together more of my ancestors' lives, and to track my lineage further back. It's sobering to realize who and where we came from can be so easily forgotten by each subsequent generation, not to mention the difficulty of tracking their timelines in the historic record.

They lived, they died, and now I hope to tell at least some of their stories. ♦

The original print version of this article was headlined "Who Tells Their Story?"