DIY and then some: Spokane Zine Fest brings unique, limited-run art publications to the public 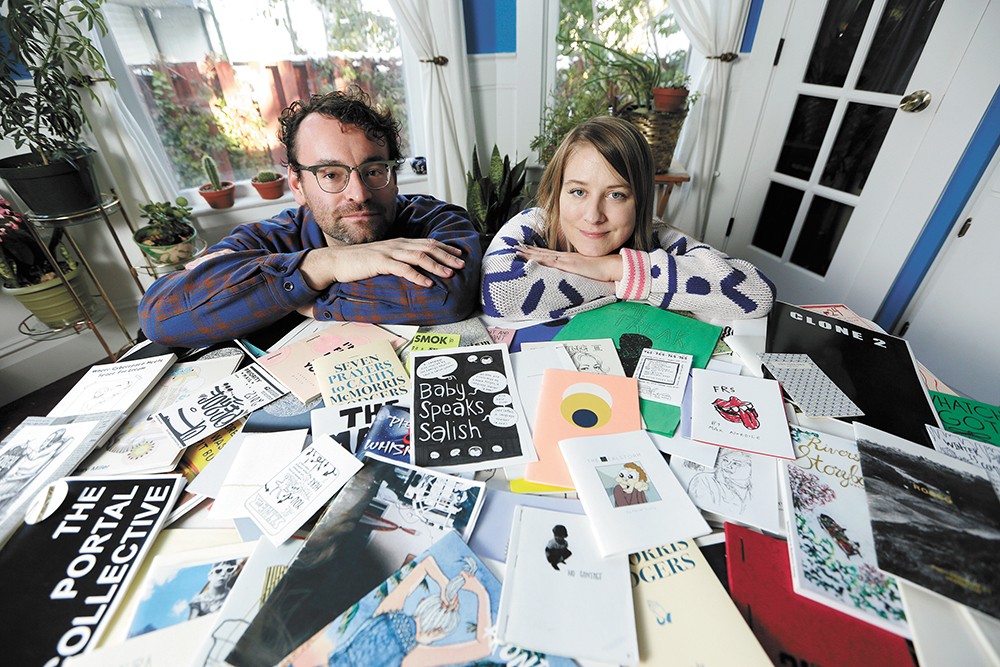 Much like vinyl, cassette tapes and real books, self-published zines are making something of an old-school media comeback in the writing and art communities.

The modern art of zine-making goes back nearly a century, taking different forms, from community-forming fan fiction to a way to deliver counterculture messaging direct and raw to the reader without the slashing edits of a publisher.

For the uninitiated, zines often mix artwork and writing via low-cost forms of self-publishing — think hand-copying and stapling a limited run of your zine at the library or your endangered neighborhood copier store. They can be about a particular genre of music or writing, a political movement, feminism, LGBTQ culture, comics, visual arts — essentially anything and everything that someone wants to package in a printed format.

In celebration of the art form, each year Spokane Zine Fest creators Chelsea Martin (occasional columnist for the Inlander) and her husband Ian Amberson bring together the makers of "zines, small press books, comics, drawings, prints, cards and other small handmade paper goods."

"I think it's kind of a rarified sort of format, which makes when you encounter it out in the world now kind of fun. You see most stuff on screens now, so when you see a chapbook or whatever it's cool," Amberson says. "There are websites that kind of have the same feeling, but I feel like zines are sort of this portable artifact. Sometimes they don't feel complete, but they're just kind of a joyful format."

The first Zine Fest came together as a quick way to make use of the Spokane Arts Grant Awards to replicate similar events they'd seen in larger cities. The two had moved to Spokane just a few months earlier when they applied for and won a 2017 grant to start the fest.

"We said, 'Let's just do that and see what happens,'" Amberson says. "We had no idea if it was strong enough for a festival then, it was a shot in the dark."

The first event was a smash, and the festival is now entering its third year, with Spokane Zine Fest slated to take place Saturday at the downtown Spokane Public Library.

However, there are still plenty of people who don't know what a zine is, Amberson says.

"I've been posting flyers and I've had to explain what a zine is to a lot of people," he says.

Part of the difficulty is that the art takes many forms. It's hard to pin down something that by nature isn't meant to be pinned down.

"I feel like a zine is a small-press, limited-run publication that's usually paper-based, and usually a self-publishing endeavor," Amberson says.

"It feels like it's pretty broad, but it's like a small magazine," Martin adds. "A lot of them are like monthly or yearly that people put them together."

Far from the art form's underground low-budget roots, zines have also been embraced by larger labels and brands in recent years, with people like Kanye West releasing a zine in 2017 to promote his new line of shoes.

"It's gotten away from like a strictly DIY project," Amberson says. "We've sort of had conversations about what qualifies as a zine. I feel like most self-publishing still qualifies, but I don't think you can say, 'If you don't do your own binding it's not a zine.'"

At the heart of it, it's just putting your own ideas out there in an unfiltered way, he says.

At Zine Fest, visitors can expect to see many types of art for sale, from limited-run zines to T-shirts and buttons. While the second year saw many return zinemakers from the first, about 70 percent of the artists this year are new, Amberson says, with about 30 tables planned and some artists sharing tables.

Most zines run between about $3 and $10, with some running cheaper.

"It is one of the fun things about the format, you can't necessarily charge a ton of money because it is sort of usually less than 20 pages," Amberson says. "It's usually just cool because it makes it accessible and you can trade with people, too."

For Martin, one of the coolest things about zines is that they make for an easy way to share your work with others without lugging around heavy books.

"And it's really easy to collect work from people you like, and you don't have to make a big investment," Martin says. "You're spending like $2 to have a little piece of their work."

Past features have included submissions like Baby Speak Salish, a zine written and illustrated by Emma Noyes with help from Jake LaMere, showing "one family's efforts to raise a Salish speaker." Another was Kate Lebo's chapbook of poetry, Seven Prayers to Cathy McMorris Rodgers.

You can find a preview of some of the artists who will be featured this year by checking out instagram.com/spokanezinefest.

"I think we have a lot of interesting art that you probably won't be able to see anywhere else," Amberson says. ♦

Mya Cluﬀ: Where Do I End, and You Begin? @ SFCC Fine Arts Gallery