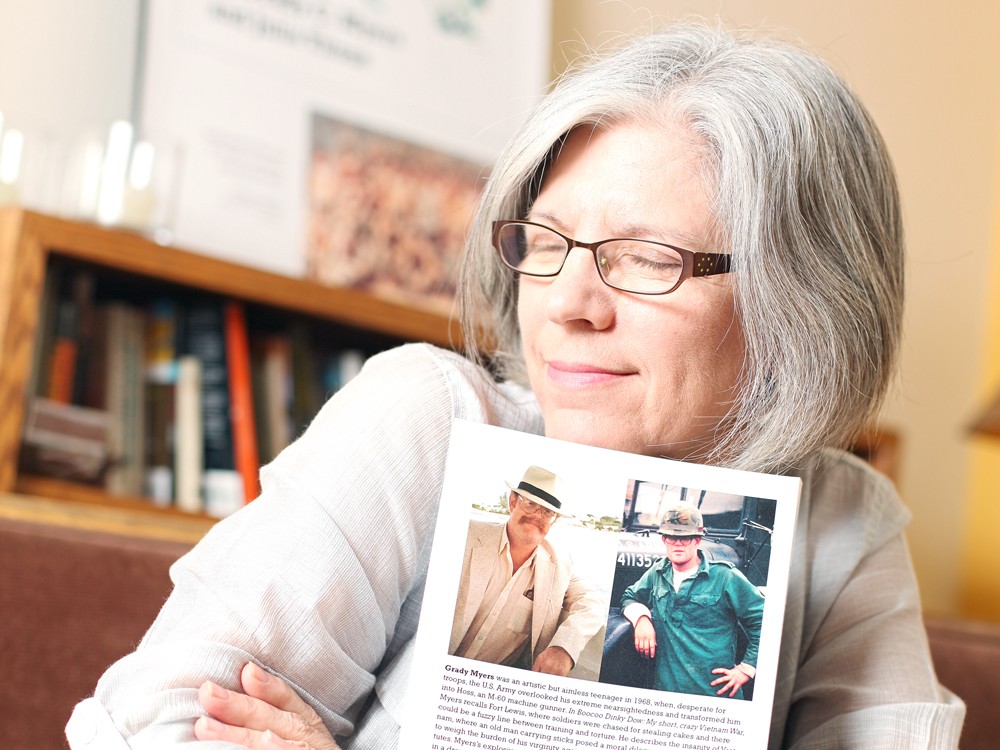 Young Kwak
Julie Titone with a copy of Boocoo Dinky Dow, her late ex-husband’s war memoir.
Somebody must have been — as the beautiful phrase in blended French and Vietnamese indicates — beaucoup (French: lots and lots) dien cai dau (Vietnamese: crazy in the head) to get the brainstorm of “Hey! Now that we’ve got wars in Iraq and Afghanistan, I’m going to publish a book of my late former spouse’s Vietnam experiences 30 years after the publishing industry said nobody wants to read about that bruise of an unpopular war in the first place.”

That somebody might be Julie Titone, director of communications for the Washington State University College of Education, except she considers herself not at all crazy in the head to publish Boocoo Dinky Dow: My Short, Crazy Vietnam War on the Kindle. The Americanized spelling of the iconic soldier phrase (which aptly summed up an infantryman’s reality) works on several levels: You want to publish war stories? From Vietnam? From your ex? You are beaucoup dien cai dau, lady.

But there’s a brave new world of self-publishing out there for the insatiable market of e-books (211,000 self-published titles last year), and Boocoo Dinky Dow, available both electronically and as a paperback, is a crazy good fit. It offers readers a unique, intimate and often humorous glimpse into the absurdity and savagery of Vietnam narrated by a tall, strapping Idahoan who was Mr. Magoo-nearsighted without his glasses and who the Army, logically, decided to make into a machine-gunner.

That would be Grady Myers, gravely wounded in Vietnam and Titone’s former husband who died at age 61 in July 2011. Myers, after the war, became an artist for newspapers in Boise and Spokane and later worked as a graphic information specialist for the Idaho Panhandle National Forests, where he created the information panels along the Route of the Hiawatha trail.

“I knew he wanted it published, and he was a marvelous man and a good story-teller and the very much-loved father of my son, and I just wanted to do it,” Titone says. “I created this book so people can tell their stories.”

Thirty years ago, Titone and Myers had approached agents and publishers with a typewritten manuscript only to be bluntly told by one industry gatekeeper, “Nobody wants to read about Vietnam.” After that rejection, the manuscript was hidden away in drawers and boxes for decades.

Today, those gatekeepers are gone, and Titone, over the last year, took a freshened, first-person version of the tale to Amazon’s CreateSpace to get Myers’ experiences — and his original sketches, several made while deployed in Vietnam — out into the world. The 50th anniversary of the Vietnam war is approaching, aging veterans are beginning to die off, and it’s time to talk about the polarizing and unpopular war, Titone argues, with more nuance than we get in Apocalypse Now or Platoon.

This a perfect use of what is being called DIY publishing, says novelist Steve Almond, who was one of the headliners at Spokane’s Get Lit! festival in April and who carts his own, mini, DIY books to readings.

“People now have a choice about what kind of a publishing experience they want to have,” Almond tells The Inlander. “They don’t have to have a big manuscript and go through a New York agent and a New York publishing house.”

His own DIY offerings are quirky, personal books (one has the self-explanatory title, Letters From People Who Hate Me, which are actual nasty letters he’s received and his hilarious responses). Most would never be published in a traditional way. He advocates, in articles and in workshops, for writers to seize the machinery much the way musicians have done.

Titone’s sales are far more modest, but still encouraging, she says. She has spent the last few weeks performing tasks that, in his workshops, Almond warns DIY authors about: tracking sales and marketing, sending books to bookstores, setting up readings, promoting the book online and in social media.

But in return, she gets the story into the hands of readers, whether by electronic device or paperback. It’s a story Titone hopes will add some depth to the nation’s discussion of Vietnam.

“[Grady] was not anti-war, not pro-war … He came home, was a good dad, was a contributor to society and by gosh, he came back and lived his life’s dream — he used his GI Bill to go to art school,” Titone says.

“The fact that it took 30 years to get published... boy, there’s layers and layers of life” coating the story — courtship, marriage, parenthood, divorce, enduring friendship, she says. “There’s new wars, new young people going to war... a different perspective on it.”

And she’d be crazy in the head not to publish it.