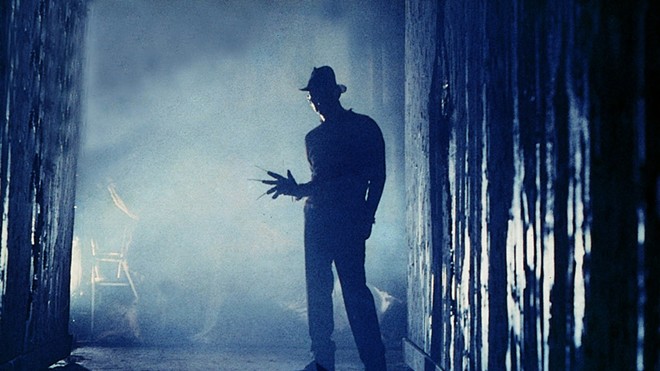 Freddy's coming for you: The original Nightmare on Elm Street plays on Halloween at the U of I drive-in.
'Tis the season for everything horror. Here's a host of Halloween movies to get you in the spooky spirit:

OCT. 24
Hub Sports Center Drive-In
The Hub Sports Center's drive-in has been running through a roster of scary films this October, from Hitchcock's Psycho to the original Ghostbusters. They're continuing the festivities on Oct. 24th with a back-to-back double feature of 1993's Hocus Pocus, which has become a Halloween staple in recent years, and the 2018 reboot of the slasher classic Halloween. Although the Hocus Pocus showing is now sold out, you can still get tickets for Halloween (rated R), which starts at 9:45 pm. Film screenings will continue through the rest of the year. Hub Sports Center, 19619 E. Cataldo Ave. in Liberty Lake, $20, hubsportscenter.org

Spokane Fairgrounds Drive-In
The Spokane County Fair obviously didn't happen this year, but that space didn't go to waste. The fairgrounds were converted into a drive-in theater in late summer, and the remaining weeks of October will feature some horror (and horror-adjacent) favorites. Oct. 24 offers up The Nightmare Before Christmas, the PG-rated animated cult classic, and Oct. 30 brings a showing of John Carpenter's pioneering 1978 slasher Halloween. On Oct. 31, the family-friendly Hotel Transylvania will be followed by a screening of the R-rated ghost story The Conjuring. Ticket prices are for each individual film. Spokane Expo & Fairgrounds, 404 N. Havana St., $20-$60, spokanedrive.in

OCT. 30 & 31 University of Idaho Drive-In Another makeshift drive-in that popped up this summer was at the University of Idaho in Moscow, which turned the parking lot of its Kibbie Dome into an outdoor theater. They're really getting into the Halloween spirit this year, starting on Oct. 30 with a double feature of The Nightmare Before Christmas and Scary Stories to Tell in the Dark (rated PG-13), both of which are appropriately creepy but still OK for older kids. Oct. 31 is for the grown-up horror fans: You can marathon Wes Craven's original A Nightmare on Elm Street, the 2003 remake of The Texas Chainsaw Massacre and 2017's It (all rated R). Gates open at 6:30 pm, and movies start an hour later. Kibbie Dome at the University of Idaho, 875 Perimeter Dr. in Moscow, $30-$40, uidaho.edu

Come Play The River Park Square AMC is open again, albeit with limited capacities in its auditoriums. Although the Halloween weekend showtimes have yet to be finalized, it looks like AMC will be screening the new horror film Come Play, a feature-length adaptation of a 5-minute short film from writer-director Jacob Chase. The film opens on Thursday night, Oct. 29, and continues through the weekend; see Fandango or your preferred ticket-buying platform for a complete list of showtimes. AMC River Park Square 20, 808 W. Main Ave., $13-$17, fandango.com

OCT. 30
Killer Klowns from Outer Space
When it was released in 1988, the cotton candy-colored horror-comedy Killer Klowns from Outer Space (rated PG-13) mostly baffled critics and audiences. But in the decades since, it has gained a cult following for its oddball mixture of B-horror tropes and rubbery, sideshow-friendly special effects. You can catch it with an actual audience at Sandpoint's Panida Theater on Halloween Eve, starting at 7:30 pm. Panida Theater, 300 N. First Ave. in Sandpoint, $6-$9, panida.org