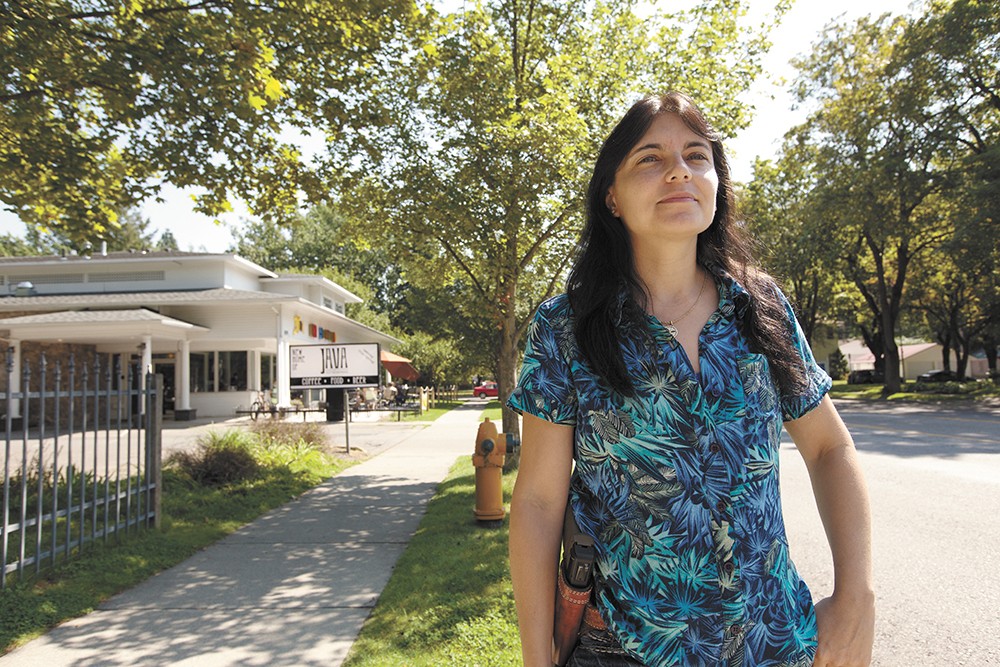 Young Kwak
Tina Kunishige, near where Arfee was shot by a police officer, is one of many still upset with how Coeur d'Alene has handled the tragedy.

— from a downtown Coeur d'Alene coffee shop to his father's barn in Hayden — like this: sitting in his dog's blood and broken glass, a hole in the van window beside him from the bullet that killed Arfee.

"[The van] still smells like him to this day," Jones says.

On July 9, a Coeur d'Alene police officer responding to a report of a suspicious van shot Arfee, Jones' 2-year-old black Labrador, in the parking lot of Java on Sherman.

Nearly six weeks later, Jones is still reeling. He and Arfee had slept on the same pillow. Arfee was his constant companion on wallpapering jobs and dirt-bike expeditions, a source of joy after Jones' separation from his wife and the death of his mother.

Now Jones keeps thinking about the trail of blood in his van, picturing Arfee dragging himself wounded to the back, confused why he had been shot. The name "Arfee" had been a joke — the black Lab rarely arfed — but now when Jones types that word into Google, his dog's death is the first thing that comes up.

The shooting has ignited the entire community, spawning multiple Facebook groups, a boycott and a flood of furious messages. After all, the details are incendiary: In an initial press release, the police first called Arfee a "vicious pitbull" instead of a black Lab. Arfee was still inside the van, with the window rolled half up, when he was shot. The cops' body cameras weren't turned on, and they left without bothering to find Jones and tell him what happened. The city has so far refused to release the name of Arfee's shooter.

Coeur d'Alene was named "DogTown USA" three years ago by Dog Fancy magazine, but now the Lake City is getting a different sort of attention.

"I've gotten emails from Alabama and Florida and New Hampshire and all over the country of people that are critical of what happened here," Coeur d'Alene Mayor Steve Widmyer says. "It's damaged our reputation."

Coeur d'Alene City Attorney Mike Gridley double-clicks on an attachment, and furious profanity starts blasting out from his computer: "Yeah, who the f--- shot that goddamn dog, you motherf---ers?! You're going f---ing down you goddamn motherf---ers! I swear to God you better f---ing watch out. Be careful. Don't f---ing sleep again!"

This message, sent to the city's criminal division, is far from the only threat. "The magnitude and amount of threats that are happening lends itself to believe that we shouldn't release the name [of the shooter]," Interim Police Chief Ron Clark says. "It's above and beyond anything I've seen or heard [before]."

The public, however, continues to call for the shooter to be identified, and a YouTube message, claiming to be from hacker collective Anonymous, has threatened to expose the personal information of all involved with Arfee's shooting.

Gridley says the name will come out — but likely only after the investigation is completed, and a third party reviews it. Several factors have slowed that investigation, Gridley says. It took weeks for police to be able to get Jones' van back. Jones has hired two attorneys and a private investigator to sue the city, and one witness hasn't been willing to talk to cops without them present.

Widmyer says he understands that the lack of information has fostered anger and accusations of cover-up. But post the "pitbull" screw-up, he wants to make sure they gets things right.

"I know people have a right to know," Widmyer says. "They will know."

Kunishige has never met Jones. But she's become one of the most active members on the Justice for ARFEE Facebook page, a group still rapidly drawing new members a month and a half after the shooting.

To her, Arfee's shooting exposes a deeper rot within the region's law enforcement. "I see that a lot of people are getting tired of it," Kunishige says. "I think the dog shooting is what pushed it over the edge."

The mayor and police chief have apologized for the incident and reached out to Jones, but it hasn't stopped the outrage from boiling over beyond social media. "Justice for Arfee" bumper stickers have appeared on cars. One SUV had "Please Don't Shoot My Dog!" written on the back window with white window marker.

A separate Facebook group urges nonlethal canine training for Idaho law enforcement officers. In Coeur d'Alene, that demand has been met: Shortly, after the shooting, Clark sent out a series of mandatory training videos to his department explaining how best to deal nonlethally with dogs.

Yet even the woman who sent Java on Sherman the initial warning about a van following her children — the one that eventually drew police incorrectly to Jones' van — joined the angry chorus. The woman, Jessi Johnson, says Jones' van didn't fit her description, that the police abandoned the van too quickly, and that it was obvious the dog wasn't a pitbull.

"Ultimately, I don't think this officer should have his job and be allowed to carry a weapon," Johnson says. "We want a name, we want something to be done, and the officer dismissed."

She's refused to answer investigators' questions without Jones' attorney and private investigator present, but doesn't believe that makes her uncooperative.

One the evening of July 18, Johnson and Kunishige joined other activists at the Cherry Hill Dog Park. They hung signs on their dogs saying "Don't shoot! I'm not a vicious pit." Attendees sung to guitars and shared memories.

Jones didn't attend the vigil. Everything was still too raw, and he hates losing his composure in public. "It's not a function that I want to be seen at with tears rolling down with my face," Jones says.

On a sunny Friday morning, a Cavalier King Charles Spaniel yips in the seat of a Jeep in the parking lot of Java on Sherman. It was here that Arfee was killed. David Patterson, the coffee shop's owner, made the call that brought the cops to investigate Jones' van, incorrectly believing it matched the description sent out by Johnson.

"I called and trusted the police were going to do their job," Patterson says. "As a human being, I'm deeply saddened about the events that transpired in our parking lot."

Patterson says the reality is more complicated: The police asked him to call a tow truck. He says he would have preferred for Jones' van to stay in their parking lot until he could meet with cops. His wife even called the police back, asking that they return to meet with Jones to explain what happened to Arfee.

Patterson says he has reached out to Jones, asking what he can do to help, but hasn't heard back yet.

Jones directs the brunt of his anger elsewhere. "I don't think my resentment is towards them," Jones says. "They didn't pull the trigger on my dog."

Behind a gas station overlooking Coeur d'Alene Lake this past Saturday, Jones tosses a stick into the underbrush. His dog Larry, with a big, thick, curly coat, dashes into the brush to retrieve it. Jones sits at a picnic table, his arms wrapped against his chest, staring blearily into the distance.

Eventually, Coeur d'Alene may forget about Arfee. But it's forever changed how Jones views his hometown. He's moving to Colorado, he says, as soon as he can.

"I'm completely thankful and appreciative and literally humbled by how many people are in shock with me over this, but that's made me more reclusive," he says. "It's hard for me to get that everywhere I go. ... I try to shop places I've never shopped before. Go to different restaurants."

It took him weeks to be able to pick up his dog's corpse from animal control. He wanted to say goodbye face to face, but couldn't bear to open the bag and look. So instead, he used his hands.

"I felt him through the bag. Every part of him," Jones says. "From his ears to his toes and the bullet holes."

As he buried his dog, Jones says, he called the dog's name like he did every morning, but this time in grief: "Arfee! Arfee! Arfee!" ♦