At Saranac, two artists tackle perception and reality with Barbie dolls and graffiti. 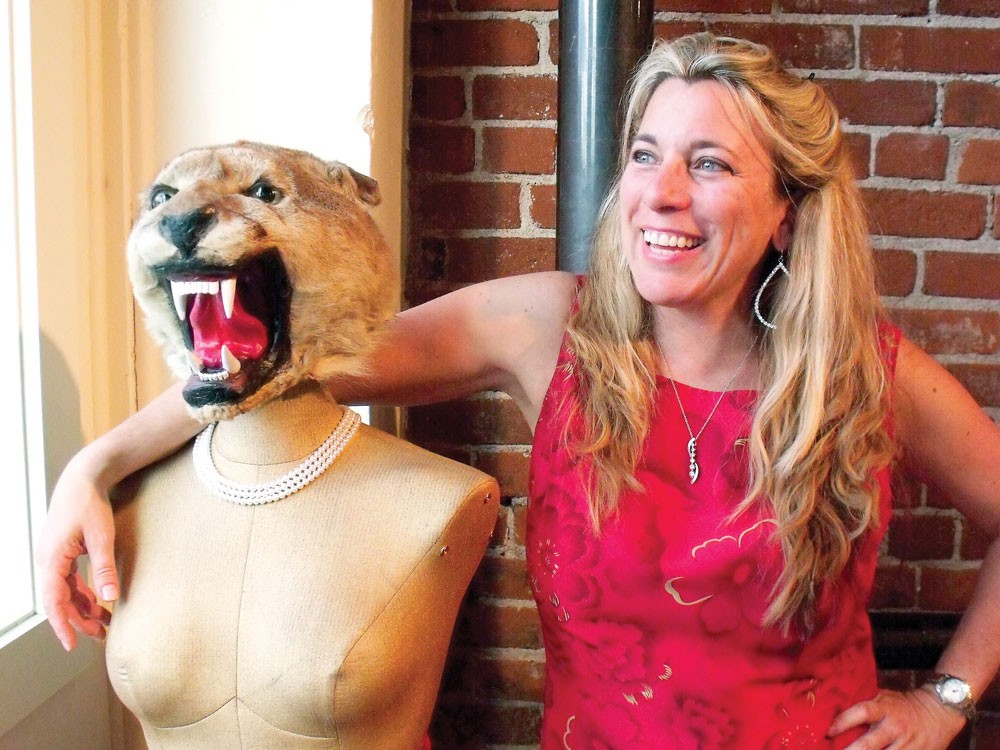 On a pedestal near Saranac Art Projects’ east wall, a wooden box sits, rotating on an axis. One side of the box features a cutout of Disney’s Cinderella. On the other, a Barbie doll is nestled inside the box, battered and bandaged with a black eye. Though the doll has been abused, she still wears her placid, frozen smile, imploring viewers to ask themselves what it means to “grin and bear it.”

Through the end of September, the outer walls of Saranac Art Projects will be adorned with Carrie Scozzaro’s “Paradise Lost and Found,” a collection of found-object sculptures ruminating on issues of gender and society. Lance Sinnema’s graffitied busts occupy the middle space, perched atop waist-high black pedestals.

In Scozzaro’s work, crafted mostly from children’s toys and electronic equipment, the choice of materials is significant. She says she’s seeking to highlight the disparity between genders, which bleeds into something as innocuous as a toy.

“Here we are in a liberated, modern, contemporary society… And yet, the ‘little princess’ mythology is still just as viable as it was,” says Scozzaro, an Inlander contributor. “And it concerns me.”

Her work is provocative but still manages to be humorous. Certain pieces drew giggles from attendees, while other works elicited furrowed brows and saddened eyes.

Scozzaro herself smiles about the themes and play in many of her pieces. But “Happily Ever After the Fall,” the piece described above, holds no joy for her. It’s “an extremely personal piece” representing domestic violence — which, she feels is generally seen as “more of a women’s issue,” and thus dealt with less.

Scozzaro’s work doesn’t initially seem compatible with Sinnema’s expressive, spray-paint reminiscent torsos. Sinnema, though, says that both of them want to provoke the audience while keeping a tone that’s tongue-in-cheek.

Where Scozzaro’s flamboyant constructions bear whatever expressions they were molded with at the factory, Sinnema has put enormous effort into each bust, from shaping their detailed facial expressions to intricately glazing on colorful patterns and graffiti.

He emphasizes that viewers need to focus on all facets of the piece— facial expressions, the title and text in graffiti — in order to fully understand them. “The [graffiti words] that are on them are sort of their feelings or their expressions or their thoughts,” Sinnema says. They serve like little comic-strip thought bubbles, or tweets.

It’s a dual show intended to act as a reality check. Sinnema implores attendees to take the time to pay attention to art and to each other, reminding us that details are important. Scozzaro wants people to examine gender politics. Both artists, in their own way, also take to task the IKEAfication of art — because artworks still have value, even if they don’t match the color of your sofa.