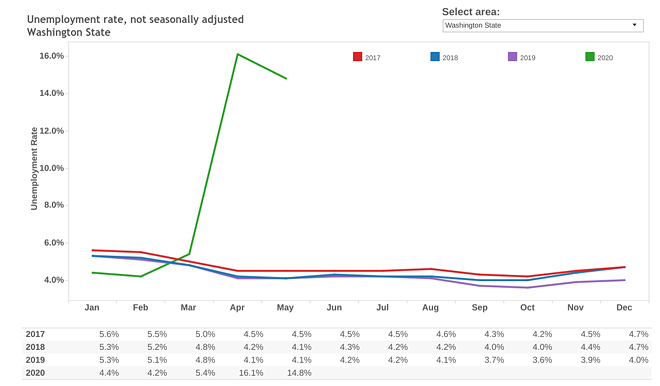 Washington Employment Security Department
Unemployment has massively spiked during mandated closures of businesses and slow reopenings for many sectors of the economy.
For those on state unemployment, the federal CARES act has been supplementing weekly claims with an additional $600 per week to stave off the worst impacts of an economic crisis.

But as currently worded, that funding only goes through the last full week of July.

As all states end their unemployment weeks on Saturday or Sunday, that means the extra funds only go through the week ending July 25 or July 26, not through July 31 as has often been stated.

Nick Demerice, spokesman for Washington state's Employment Security Department, confirms that the additional funding only goes through the last full week of July.

"It's confusing for folks because they'll file [starting on] the 26th for that week," Demerice says.

People can file their claim for the previous unemployment week from Sunday through Saturday of the next week. Since Washington's work week ends on Saturday, Aug. 1, that very last week of July will not be included as the last "full" week of the month.

"There's a lot of conversation on the federal level as to whether this gets extended or not," Demerice says.

There are multiple proposals that might extend those federal benefits, with one proposal extending the extra $600 a week through January 2021, and another that would provide less additional money per week ($200-$450) based on how bad the job market is in a state and what phase of restrictions that state is currently in.

Almost 30 million Americans are receiving the extra unemployment funding, and if that stops at the end of July, experts warn that the results could be economically devastating, with Marketplace reporting that typical weekly benefits in some states are about $240 or less.

The Senate is set to return from a recess July 17, when things would have to move quickly to avoid a sudden cutoff in those benefits.

That's about 100,000 people higher than the peak of unemployment during the Great Recession, he says. While the numbers are already significant, the lasting impacts on state employment remain to be seen.

"What we’re seeing a lot right now is this transition between a temporary closure, when the economy was shut down for the pandemic response, to the further economic impacts when you’re seeing more businesses not reopening and moving from a standby furlough to permanent layoffs," Demerice says. "That’s some of the impact we’re seeing now, and I think will continue to see as we get a sense of how deep the crisis is going to be."