For now, the Air Force is providing water for residents near Fairchild whose wells have been contaminated, but then what? 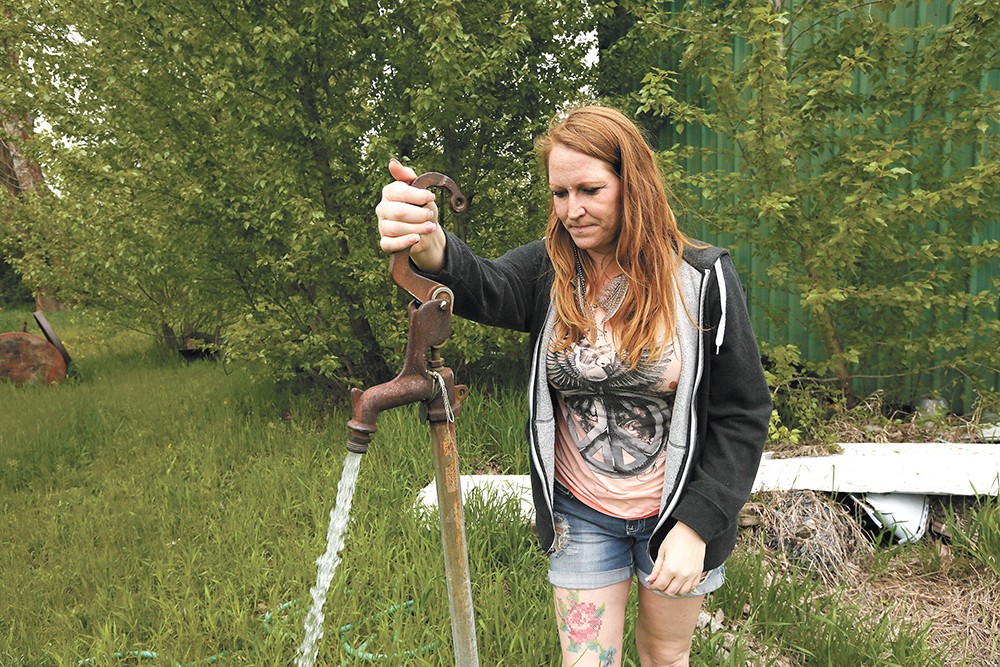 Young Kwak
Julie Dibble pumps water from a well, water that her family has been told not to consume.

"I already know I'm poisoned," says Huff, who's lived near the west corner of South Craig and Thorpe for about 20 years. "But the things it causes we need to test for. Like, it causes thyroid problems, cancers, things like that."

Fairchild Air Force Base officials began testing water wells last month and discovered that many had been contaminated with chemical compounds found in the firefighting foam the base used for decades. While the Air Force works on a more permanent fix, officials have notified neighbors like Huff that they could be using bottled water to cook and drink for months.

For the moment, Huff is spending less time thinking about the future and more about the past 20 years she's spent drinking potentially contaminated water.

She decided to see a doctor after conducting her own research online.

"I'm just sick about the whole thing," she says.

She lives in the home with her partner, Kevin Howell, and raised her now 34-year-old son there. Her three grandsons, ages 4, 10 and 16, are at the house frequently. She doesn't know if she should let the young ones run through the sprinkler anymore.

The two chemical compounds involved are perfluorooctanoic acid (PFOA) and perfluorooctane sulfonate (PFOS), which in addition to being used to extinguish fuel fires, have been used in consumer products, such as Teflon cookware, carpet, clothing, fabric and food packaging — things that need to be resistant to water, grease or stains — according to the Environmental Protection Agency.

These types of compounds have a tendency to stick around in the environment and in the body, and people around the world have been found to have them in their systems.

Studies have linked the compounds with lower birth weight and possible birth defects, increased risk for cancer, hormone changes, decreased fertility, higher cholesterol and more, but more study is needed to better understand how they might impact human health, according to the Agency for Toxic Substances and Disease Registry.

It's got neighbors wondering if past health issues could be related. If animals they lost to illnesses met an earlier-than-necessary demise. If they should be sharing their bottled water with their dogs, cats, chickens or livestock.

Barb Collins lives on the east corner of Craig and Thorpe, where she cares for her partner and her brother. She's worried about their health, as well as her three little Shih Tzus, which she calls her kids.

"They say they're only concerned with human health, not animals," Collins says. "I have a problem with that."

While residents are getting about a gallon of water a day per person, dropped off in two-week installments of 3- to 5-gallon jugs, they've been told they only need to use it for drinking and cooking. Brushing their teeth, bathing and washing dishes with their well water are all supposed to be OK, because the water isn't likely to be ingested, according to a question-and-answer sheet the Air Force provided them.

The sheet specifically says the EPA health advisory only applies to people, and since there are no current standards for animals, the residents shouldn't use the bottled water for their livestock.

Julie Dibble, whose family has lived on 15 acres off Thorpe for five generations, explains that this is a farming community, albeit not as large as it used to be. There are pigs and cows being raised for sale, as are eggs and produce.

"We don't just eat the meat, we also run businesses off it," Dibble says.

Despite the Air Force's guidance, several residents say they are using some of the water for their dogs, cats and chickens. Others have opted just to throw the eggs away until they know more. The large animals are still on their own.

A study of a small sample of eggs in a part of China near a fluorochemical industrial park found that eggs produced at home were much more contaminated with this type of chemical than commercial eggs, with the highest levels in the egg yolks, according to an article in Environment International in January.

A CREEK RUNS THROUGH IT

Some of the 17 initial wells that were found to be contaminated south of Fairchild had preliminary results (all in parts per trillion) of 226, 440, 940 and 5,700, according to residents the Inlander spoke with.

The early results seem to be all over the place, Dibble says.

The Air Force would not provide a list of the results, a high, low or a median, "out of respect for the privacy of well owners."

The base has since tested 30 more wells, and those early results should come back this week.

Dibble and other neighbors asked if a creek that runs through their properties carried the contamination their way, but the base does not plan to test the creek yet.

"The creek that runs through the area of the initial 'Phase 1' residential well sampling has not been sampled because it is not known to be a source of drinking water for human consumption," writes Marc Connally, Fairchild's Air Force Civil Engineer Center on-site Remedial Project Manager.

But that's where cows drink, and children run and play in the hot summer months, Dibble says. 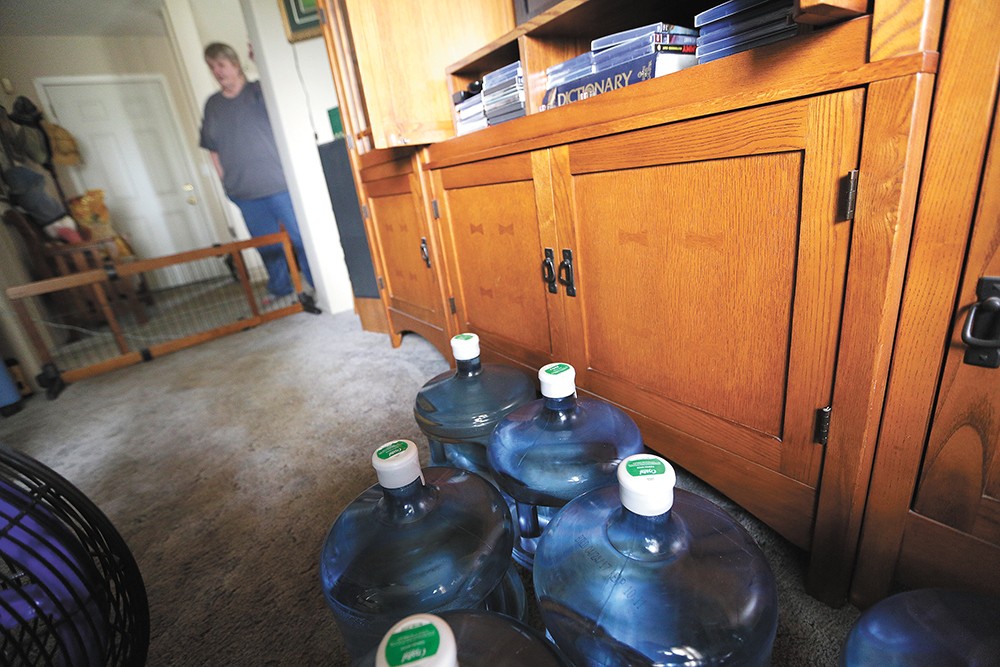 Young Kwak
Residents are getting jugs of water, like these in Barb Collins' home.

The base no longer has the type of firefighting foam that was used from 1970 to 2016, says Scott King, a Fairchild spokesman.

"The main thing is, Fairchild is trying to be a good community partner," King says. "We care for the folks outside the gate as well. We care about their safety and well-being."

The Air Force will provide bottled water until another solution is figured out. That could include some type of filtration system, water treatment, or looking to connect affected residents to municipal or public water sources.

"All options are being considered for a long-term response," Connally writes. "Treatment of the groundwater itself is a long-term remedial action that the Air Force will propose after the Remedial Investigation is complete. This is likely to be several years in the future."

Some water treatment plants use activated carbon to filter out particular chemical compounds, but it's not clear if that would work well when scaled down for smaller, individual systems.

Richard Watts, a professor of civil and environmental engineering at Washington State University, is an expert on treating contamination at the source with oxidation processes, which his lab has studied for more than 30 years.

Watts, one of the first to study the process for cleanups, thinks it has the potential to work as a treatment for the chemicals.

"It would not be that hard to implement," he says. "A lot of specialty companies do this type of thing."

In 2014, his lab published a study that showed hydrogen peroxide — what you use to clean your cuts, only much more concentrated — mixed with a catalyst, broke down most of the PFOA in the water in just a few hours, removing all of the fluorine molecules from the chemical compound.

"That's important, because one of the issues you have when you have a toxic compound, and try to degrade it, is it doesn't always degrade completely," says Amy Teel, an associate research professor who works with Watts. "What it degrades to could be as toxic, or more toxic, than what you started out with."

Teel notes that while their results in the lab were promising, they haven't been used in the field yet. Minerals in the soil could impact the process, and it also depends on the ability to get to the contamination.

That said, the process also has the potential to save many years of cleanup time, compared to other methods, Watts says.

The military is currently screening proposals for cleanup. In the meantime, residents wonder how they can plan for the life of their property.

"Essentially, my property is worth zero now. It is," Huff says. "How are they going to clean it up?"

Dibble says her family had started clearing part of their land to start an orchard there, but now the future seems uncertain.

"Are we still going to be here for another generation?" she wonders. "This is supposed to come to me, and then my daughter. It's supposed to stay in the family. Our dream of what this was to be for our family is dead, we feel." ♦

Local and state officials, as well as officials from Fairchild, will hold a town hall on May 23 at 6 pm in the Medical Lake High School auditorium to present more information on the compounds involved in this contamination, and address questions and concerns.