Don't Pass Me By 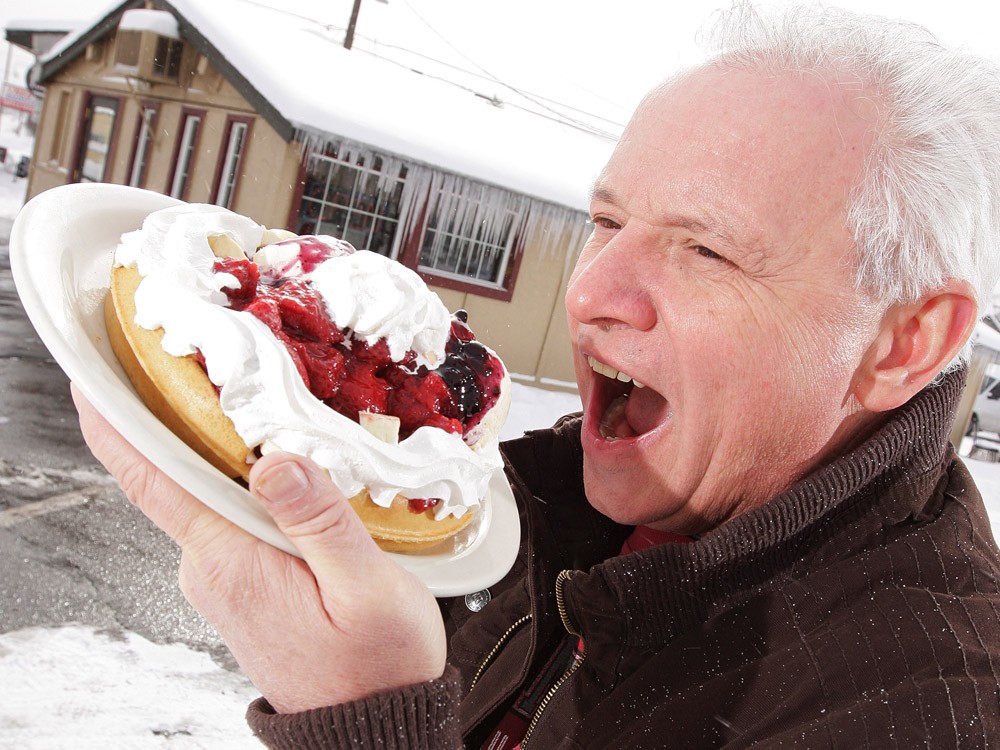 It's easy to be seduced under false pretenses. You drive by a restaurant. It looks nice. You go in. But then your food comes, and you realize after the first bite that just because a place has a fountain or nice curtains or some mood lighting doesn’t mean they know how to cook. Below is proof of the reverse: places that don’t bother using lavish frills to seduce you. For the following, only two things matter: the food, and you. Screw décor.

The menu offered inside this shy, beige building will send your inner child into a tizzy.

Inspired by his kids, owner Dale Westhaver decided to get creative, which is why waffles from Waffles Plus come with candy, fruit and ice cream and are topped with their signature syrup and mounds of whipped cream. Westhaver also features bacon and sausage waffles ($7.75) — the meat is just baked right into the waffles. Simple — yet, genius. Their most popular item, the All-American ($10.50), is a giant Belgian waffle with two heaping scoops of vanilla ice cream, strawberries, blueberries, and whipped cream.

Westhaver is a people person, which is evident from the way he visits with each customer like they’re an old friend. And many are — the customers that he interacts with have become his friends. He wants to create a family environment where people feel like they’re at home.

“I have nothing against the corporate attitude,” says Westhaver. “I just don’t want that feeling when people are coming in [here].”

The food and the personable diner atmosphere make Waffles Plus the ultimate hidden gem.

And Westhaver and his customers wouldn’t change a thing about this “little country restaurant in the city.”

“I just like it the way it is,” says Westhaver.

The brightly colored spot in an old building on Second Avenue will certainly draw your eye, but those who don’t follow through and venture inside are missing out.

Inside, the same bright theme continues, a single room filled with the scent of authentic Mexican cooking. As he waits tables, Benjamin Zuniga dances and sings along to the music playing over the speakers while his brothers prepare the food in the exposed kitchen. The energy inside the restaurant is as playful as the paint colors.

Although Tacos Tumbras opened over a year ago, the family-owned business was forced to close during the rehabilitation of Second Avenue last summer. They then operated solely out of their Valley location. But they re-opened about a month ago, and Carlos Zuniga Jr. says the business is picking up again. Within the next month or so, he says, they will open a bar next door, which they hope will draw a late-night crowd.

As for the food, Carlos says the recipes are mostly from his family, but they’ve updated a few. He recommends the fish taco ($3), which is made with fresh tilapia, cilantro, onion, cabbage and special sauce. The torta ($6.45), a Mexican sandwich, was packed with meat, lettuce, tomato beans and sour cream on toasted Mexican bread — a soft, semi-sweet bread that melts in your mouth.

On our visit there, we listened as every single lunchtime customer commented on how fantastic the food was. They really weren’t just saying that.

It feels like you’re sitting inside a watermelon. The interior of Vien Dong is painted in two contrasting tones: pink and dark green. Paper fans hanging on the wall are the only pieces of décor. The hallway leading to the bathroom is lined with doors stacked into piles leaning against the walls, which is confusing. But then you have the food, and nothing else matters.

When we called to talk to the owners, the soft-spoken woman who answered the phone said she didn’t speak English well enough to talk to us about the restaurant, nor was there anyone present who could. But food has a way of breaching language barriers, and the menu at Vien Dong speaks loudly.

The cuisine is a fusion of Vietnamese and Chinese fare, and features everything from Pho ($6.99) to Chow Mein ($8.99). But they also have the less common Vietnamese sandwiches called banh mi, which are comprised of your choice of meat and veggies on a Vietnamese baguette made from both wheat and rice flours — for a staggering $2.75. A whole, delicious sandwich made with fresh ingredients. No fast food can beat that.

Located in a strip mall between a nail salon and a Great Cuts, this is probably the last place you’d expect to find authentic German food and drink. Inside, the restaurant is filled with cute German trinkets. Polka music pumps out through the speakers.

Christy Salisbury has been bartending at Chic-A- Ria for eight years now and proclaims the restaurant is home to the best schnitzel she’s ever had (which, by the way, is free on your birthday). Salisbury credits everything to George Weimer, chef and co-owner.

“Every single thing is made from scratch,” she says.

“He doesn’t skimp on anything.”

Weimer even makes his own bratwurst, which are featured in the Bratwurst Combo ($12.95) — a plate of 3 different brats and your choice of side. Their beers rotate constantly, but expect to find traditional pilsners and bright wheat beers, like hefeweizen.

Although the place is set up as a diner now, Salisbury says Weimer has plans to remodel, opening it up more, to give it the feel of an authentic German pub. Until then, the neon lights and trinkets suit us just fine.

Unless you’re prone to getting lost in residential areas, you might not to find the Sweetie Pie Café. Located in an older house, the only clue as to what lies inside is the word “CAFÉ” painted onto a natural wooden fence outside in large, black cursive letters.

“It’s hard to find us, and it’s not the greatest location, but when people find us they can relax here,” says Julie Becker, who co-owns the café with her mother, Marilyn Blair. “We were looking for a unique building.”

Inside, it feels as though you’ve walked into someone’s living room. All this seems fitting, considering Becker and Blair make their pies from scratch using old family recipes.

Sophie’s Chocolate Cream Pie ($3 slice, $16 whole) was their first creation and remains a staple today, with a lightly salted crust bringing out the rich chocolate flavors. In addition to rotating pies, the two ladies also serve a full lunch menu, featuring sandwiches and various kinds of quiche. It’s best to bring someone along to sample as much as possible, but expect the last bite to be sad. Mostly because the pie’s gone, but also because it reminds you that you have to go back to your own home now. Best take a pie to go.