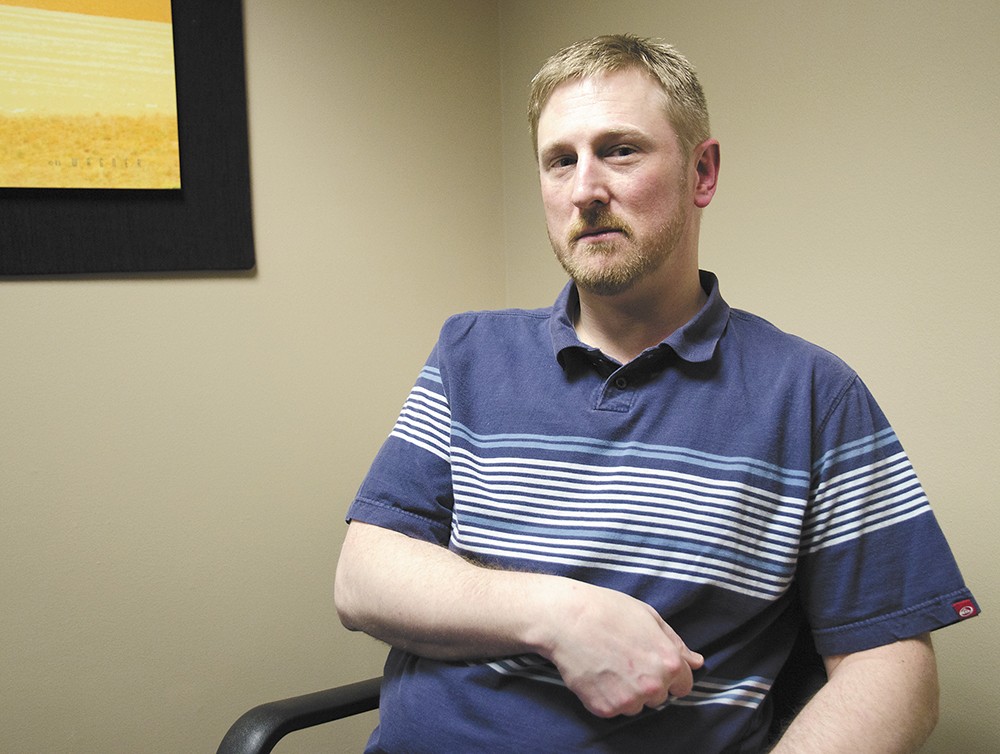 On his knees in the parking lot of his Spokane Valley church, Matt Kinerson believes he is about to die. He watches a laser sight trained on his chest as several Spokane County sheriff's deputies scream at him, weapons drawn. He had tried to warn them he has a medical condition, but now he cannot hold his weakened right arm above his head any longer.

It starts to fall toward his waist.

With his good left arm, he desperately reaches down and pulls up his shirt to try to show he does not have any weapon. As he pulls his shirt up over his face, a deputy fires a Taser, crumpling Kinerson to the ground.

"I thought I had been shot," he says later. "I have a neurological disease, so I feel things differently."

Kinerson, 44, suffers from Reflex Sympathetic Dystrophy, a disorder of the nervous system that causes chronic pain, hypersensitivity and mobility issues. In particular, Kinerson struggles to use his right arm, which hangs stiff along his stomach and shakes involuntarily.

His eyes grow wide and his voice turns sharp as he recalls the encounter from May 23, 2013. He explains deputies Tasered him twice, before wrenching his immobilized arm behind his back and berating him. He recently filed a federal lawsuit against the county and Tim Jones, the Spokane Valley deputy who fired the Taser, alleging excessive force and negligence.

Kinerson used to be a ski instructor. He says he enjoyed camping or shooting pool with friends. But throughout the past several years, RSD syndrome has increasingly limited his ability to function normally. Some days he struggles to get his shoes on. He lives with his parents, so they can help with daily tasks.

"It is very painful," he says of RSD. "It messes with your nerves, messes with everything. ... You just have to try to manage it."

The day of the incident Kinerson had an argument with his family and drove off to cool down. After he left, his sister called 911 to report he might be distraught. She reportedly mentioned he sometimes carries a gun, for which he has a concealed pistol license.

Kinerson says a dispatcher soon called his cellphone. He gave her his location and assured her he was fine. When he saw sheriff's patrol vehicles pull into the parking lot, he explained his medical limitations to the dispatcher so she could relay the information to the deputies. Kinerson's father, George, says he also told 911 dispatchers about his son's condition prior to the incident.

"I already know it makes police uneasy," Kinerson says of his shaky right arm. "I can understand their position, [but] they didn't try to communicate with me. ... They didn't do anything but scream at me the entire time."

Despite the warnings, Kinerson was Tasered and wrestled into custody by force. He says he never offered any resistance, but deputies later reported he had yelled, "Shoot me!" Kinerson contends he was begging, "Don't shoot me."

George Kinerson says he and his wife have raised eight children to respect the church and the law, including one who served as a military police officer. But they say they now believe authorities misrepresented the facts of their son's encounter, undermining the family's longstanding trust in law enforcement.

Matt Kinerson never faced any charge. He later passed a psychological evaluation at the hospital. Even if he had been suffering mental distress, he says deputies made no effort to "talk him down" or reason with him. They defaulted to aggression, he says, treating an innocent citizen like a dangerous criminal.

His attorney Richard Wall says Spokane has seen a number of lawsuits in recent years based on overzealous police actions. Too many law enforcement encounters result in unnecessary force against a citizen.

Training should be improved, Kinerson says, but more than that or money, he would like to see the deputies fired. He says the community has become too complacent, giving law enforcement a free pass while citizens pay the price.