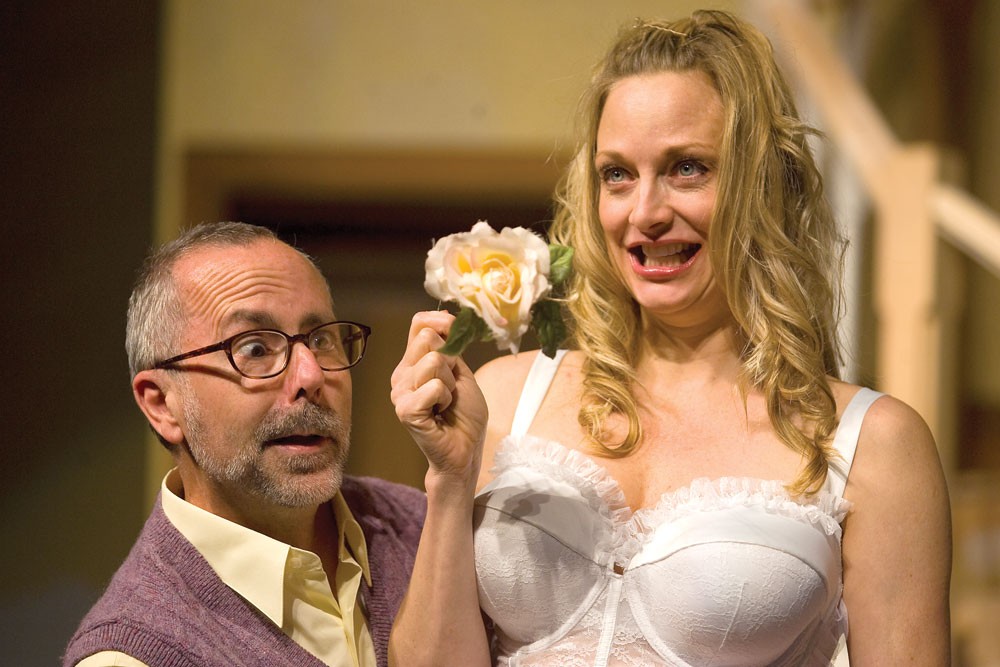 Kevin Quinn
Why is Noises Off a sure-fire hit? Because people act stupidly and run around in their underwear

In Noises Off, the door-slamming farce that opens the Idaho Rep season in Moscow this week, there’s a sequence in which one of the characters hops up

and down stairs with his shoelaces tied. An old lady keeps misplacing a plate of sardines. Doors keep getting stuck. Then they come off the hinges altogether.

Real-life changes at Idaho Rep parallel the fictional tumult in Michael Frayn’s play. With new leadership and a slimmed-down schedule, Idaho Repertory Theater opens its 59th season facing its biggest financial challenges since 1992 (when the IRT was reduced to a single show).

"After budget cuts, theater confronts financial setbacks”: It’s an old story. When has the theater not been in crisis? At least IRT is attempting some changes. For decades, the theater produced four-show summer seasons. Last year saw the experiment of bringing a Coeur d’Alene Summer Theater production 85 miles south. This year, Idaho Rep isn’t even actually “in rep,” with its three shows appearing sequentially, not in rotating repertory, and with the third show restricted to just four performances.

It’s clear that DuVal (who’s newly arrived at UI from the Oregon Shakespeare Festival) and co-artistic director Kelly Quinnett (who has taught acting at UI for a dozen years) are trying to retrench wisely. In 2012, DuVal says, the Rep hopes to get back up to four shows, especially if it can pull off another co-production.

Not only will Noises Off feature a cast with plenty of professional experience, but it also requires a twostory revolving set. Playgoers will first witness a dress rehearsal of the farce’s play-within-a-play, “Nothing On” … and then all the backstage shenanigans that go on during a performance … and then, after the set revolves yet again, yet another performance seen from frontof-stage (though by that point, the characters are just trying to get it over and done with).

DuVal, who’s directing, says that “there’s a section in the middle of Act Two — all the play-within-a-play and backstage stuff — that’s one long farcical ballet, and it all has to sync up with the text. It’s really challenging for any acting company.” There’s so much precisely timed door-slamming that during rehearsals, before the set was built, DuVal had his actors yell “slam” right in the middle of their lines.

It’s the kind of show that you really need to see in live performance. (There’s a movie version of Noises Off, but everyone agrees it’s awful.)

Actors always talk about the energy they get from audiences, and about how comedy is funnier if the actors are serious about it.

“Some audiences may not be that responsive, so you want to let them come along for the ride without pandering to the audience or trying to provide laughter that seems gratuitous,” DuVal explains.

“So then sometimes actors try to do too much — they start thinking that playing the reality of the moment isn’t enough. They think they need to goose it up by doing funny stuff. But an audience always perceives that. It’s an unconscious deciphering, but an audience can always tell the difference between when actors are actually funny and when they’re trying to be funny.”

And that’s why the dialogue between actors and audience is important: Playgoers need to show their appreciation and let the actors know that the jokes are landing. If you sit on your hands, they’ll be tempted to overact. With Noises Off, though, it isn’t likely you’ll be sitting on your hands.

The comedy keeps coming later this summer. Director Gary Armagnac’s ’50s-style Taming of the Shrew will feature greasers and bobby-soxers scampering over a refashioned version of the Noises Off set (a cost-saving measure). The season’s third and final show, Moss Gown — a mashup of “Cinderella,” King Lear and a Cajun sensibility — will be directed by its author, Micki Panttaja, who for decades has been associated with University of Idaho theater.

With Noises Off in particular, the Rep is making its best pitch at staying around for decades more.