How Bonnie Raitt became the Grammy-winning icon we know today 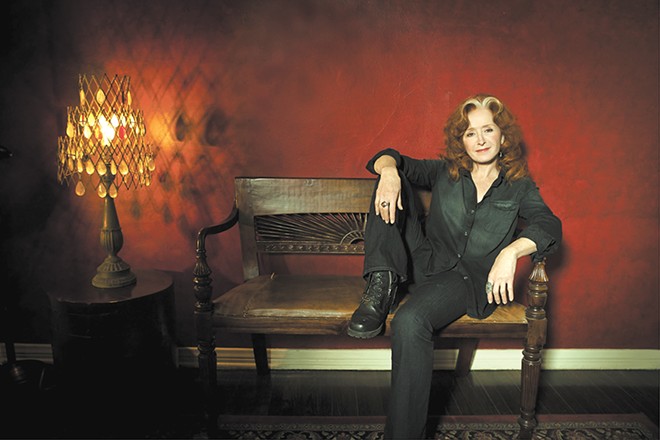 marina chavez photo
Bonnie Raitt continues to give us something to talk about.

Divas are not like you. They sound better, look better and have cooler friends.

Their fame is a product of their big personalities, booming voices and the way we can't stop watching them when they stand in a spotlight. But of all the divas in today's musical world, Bonnie Raitt is one who falls under the radar.

The 66-year-old never arrives dripping head to toe in diamonds and fur (looking at you, Mariah Carey); her red hair with white streaks and mostly black attire pale in comparison to such outlandishness. She often seems so down to earth, you're liable to forget she's won 10 Grammys, is a member of the Rock and Roll Hall of Fame and was named one of the best guitarists of all time by Rolling Stone.

What does it take to make it to the top of the musical heap and earn the title of diva? You can't just slap it on yourself; critics and peers must organically decide the label fits. Raitt is one of the few who meets the specific diva qualifications.

As the term came from the opera world, modern pop divas are expected to employ extreme vocal prowess. When Raitt appeared on the scene back in the early 1970s, she played slide guitar and sang with a fiery and earthy ferocity; the genre-bending musician almost immediately became a critical darling. Her smoky vocals have always stood out, but she never sings too wildly. However, Raitt has something most of those other octave-defying divas don't — she's one of the best guitar players alive.

Mine the troubled past

Raitt's hit ballad "I Can't Make You Love Me" first bared her heart to the world in 1991. The diva's most recent release, February's Dig in Deep, concentrated on the dark period in her life after her mother, father (Broadway star John Raitt) and brother all passed away within the previous decade. Raitt has also been sober since the late 1980s. The new album includes five songs written by Raitt, the most she's penned for a record since 1998.

In it to win it

Raitt's new record (released on her own Redwing Records) is her 17th studio album and more than proves that she still wants to push herself. She's inspired plenty of female musicians, blazing a path for those who didn't want to be boxed into a particular genre, like Brandi Carlile and Heartless Bastards' Erika Wennerstrom. Although she has taken sabbaticals throughout her career, Raitt shows no signs of slowing down.

Just as often as a diva must balance on high heels, she more than likely stands up against what she sees as the world's various injustices. In Raitt's case, that means bringing awareness to multiple environmental and anti-nuclear causes.

Last, there is a high level of fandom that a diva must attain. The people who cheer for her loudest know every lyric and would give anything to meet their star. Over her long career, Raitt would never have sold millions of records without her fans. She's a diva who continues to tour around the world showing off her illustrious guitar and vocal skills, sounding as good as ever. ♦