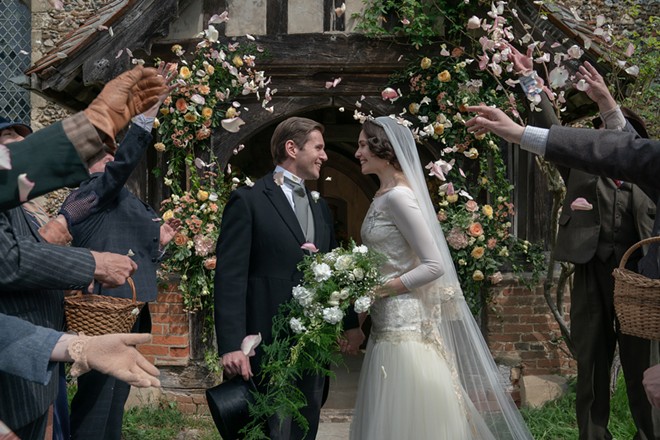 The subtitle of the latest Downton Abbey movie may be A New Era, but there's nothing new about the second movie based on the beloved British period drama series. For longtime Downton fans, that shouldn't be a problem, since the main appeal of the movie is just getting to spend a couple of hours with old friends. No one who hasn't already been following the lives of the upper-crust Crawley family and their servants is likely to get much out of A New Era, but the movie isn't for them anyway.

The producers have recruited a director with more experience making feature films than previous helmer Michael Engler, but Simon Curtis (Goodbye Christopher Robin) brings only minimal cinematic flair to the otherwise TV-level production. Set in 1928, A New Era opens with the wedding of two characters whose burgeoning romance was a major subplot in the previous movie, and the camera travels down the church aisle, pausing to acknowledge each major character as they beam proudly at the union of Tom Branson (Allen Leech) and Lucy Smith (Tuppence Middleton). Tom and Lucy don't get much to do in a movie that has to juggle dozens of returning characters, not to mention a few new additions, but Tom's young daughter, Sybbie, does provide the catalyst for one of the movie's two major storylines.

Crawley family matriarch Violet (Maggie Smith) discovers that she's been left a villa in the south of France by a man she knew when she was a young woman, and she decides to bequeath it to Sybbie, whose complicated family position means that she might not otherwise have an inheritance. Half the Crawleys and half the servants head off to France to negotiate with the deceased man's surprised heirs, while the other half stay behind at Downton, where a film crew arrives to use the estate as a shooting location for a movie.

Although there are some minor secrets revealed about Violet's past in the France storyline, and there's some minor intrigue for a couple of characters amid the film shoot, A New Era is almost completely conflict-free, mostly just a parade of familiar characters showing up to smile and say something innocuous. The TV series featured plenty of betrayals and scheming, but creator/writer Julian Fellowes seems to have decided that he prefers to keep things harmonious, and much of A New Era involves methodically pairing off characters who had yet to be romantically attached.

The actors still bring their full enthusiasm to the project, even the ones who only get a handful of lines this time around. As always, Smith delivers Violet's withering put-downs with sarcastic glee, and Fellowes still writes her plenty of witty zingers. Among the other characters, Michelle Dockery finds some genuine emotion in Lady Mary's response to her latest romantic suitor, even if it's a mostly perfunctory development necessitated by the unavailability of actor Matthew Goode, who plays Mary's husband, Henry. Hugh Dancy brings some charm to the role of the movie director who is smitten with Mary, like nearly every other handsome man who's ever shown up at Downton.

While Fellowes has been making some attempts to tackle serious issues on his HBO series The Gilded Age, there's no such social awareness in A New Era, whose main nod to changing times is a look at the transition from silent film to sound. Fellowes clearly has affection for that classic showbiz world, and he could probably put together a fascinating series set in the 1920s film industry. It might give him something to be passionate about, since he's clearly coasting through A New Era. Then again, coasting is all Downton Abbey really calls for at this point. ♦

The original print version of this article was headlined "Comforting View"