In search of burritos, pizza, sushi and breakfast after midnight 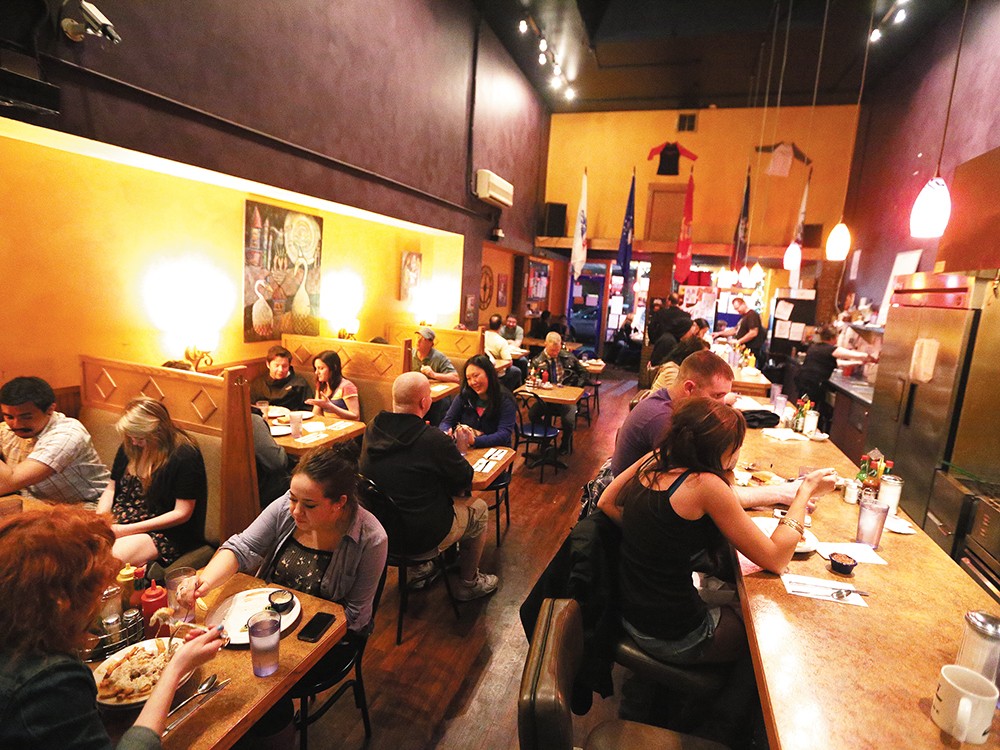 Young Kwak
A typical weekend night at the Satellite Diner, one of downtown Spokane\'s late-night favorites.

It is simple supply and demand — a large late-night population demands a large late-night culture. In cities like Chicago, New York and Miami it is possible to feast on lollipop lamb-chops at 11:30 pm, Mung bean noodles at 2 am or sushi at dawn. But what downtown Spokane lacks in population and lamb chops on sticks, it makes up for in late-night transformations. Some staid afternoon businesses dim the lights and serve past 11 pm, some even later. The result is a surprising diversity of dining options; yes, there is sushi.

During daylight hours, most orders of beer bread, spicy mac and cheese, tomato basil, black bean or any one of the many soups are ordered for pick-up by downtown workers. But pay attention. That sound system behind the bar really is too good for the likes of Jack Johnson and Ben Folds. So it’s really no surprise that when the restaurant re-opens at 7 pm — and magically becomes Soulful Spirits — the music changes to a heavier beat; the demographic dips younger and even though the beer bread, cheese and soups are served until close, cocktails are the main attraction. Bartender Amy Hille, recently relocated from Los Angeles, says that when she came back to Spokane she was pleased to see Soulful Soups offered options other than “greasy bar food.” Hille continues, “People here care about [the food] when they make it.”

Across from the Davenport and the Knitting Factory, Neato Burrito sees a range of clientele, from the business afternoon crowd to late-night concertgoers. When asked how he readies himself for the change in demographics, server Ben Jennings answers, “Lots of mental preparation.” The food and ordering process is the same regardless of time of day. Customers line up at the counter and order off the overhead menu. A flour tortilla or a wheat tortilla? Pinto or black beans? Brisket or chicken? These choices may cause pause in a sober diner; try making them at 1 am, when your eardrums are blown out and your reflexes are less than optimal. But have no fear. Jennings and his co-workers have mentally prepared for party-induced slowness. Jennings explains, “You get a lot more freedom to give people whatever you want at night. Mostly people are hungry and they just want something.”

This jovial late-night cafe is the realm of happy drinkers and caters to men and women who, according to managers Bart Olson and Chris Skillman, are looking for “Good food, fun environment [and a] good bar. It’s a great last stop before heading home.” The sky-blue exterior paint, the orange-and-yellow interior and the enclosed outdoor patio suggest tropical climes and, yes, happiness. The place is low-key, open to everyone and has its regulars, who know the Monterey for its pizza, calzones, nachos and barbecue, all served until 2 am or later.

Probably the most diverse menu, and crowd, is found at Wave. The late-night menu offers everything from lemon chicken, to half-off full-sized sushi rolls, to sautéed mushrooms and French toast sticks. Manager Noel Macapagal notes that latter is one of the best sellers but there is something on the menu for every taste. Unlike other late-night establishments, Wave’s layout changes from day to night and lends itself to a range of late-night diners. The karaoke and DJ are at the front of the house for the partiers, but make your way back to the second room and you’ll find seating for a quieter sit-down meal. Farther back are private dining areas for special events. Wave sets the standard for late-night downtown urban sophistication. But a short jaunt down the street takes you to …

THE SATELLITE DINER AND LOUNGE

The Old Ironsides of late-night dining, the Satellite is the bookend to a classic night out. Some nights the staff turns off the music because the crowd’s cacophony doesn’t harmonize well with classic rock. During afternoons, when clientele and ambiance are much mellower, the Satellite serves up sandwiches and fries, but after the transition hours (4-8 pm) the staff prepares for the onslaught. Waitress Robin Glenn fondly describes the late-night diners as “Insanity at its best… It’s kind of like a movie — they’re changing the set — and then cue the crowd.”

Glenn concurs, adding, “I think they order the scramble because they don’t really want to think about how they want their eggs cooked, it’s all in there: scrambled eggs, hashbrowns, the diced German sausage, the diced ham. You want cheese and gravy?” Glenn continues with her best drunk imitation: “ ‘Ooh, I want the scramble.’ And then they pass out.”