After taking his jazz tunes all over the world, Ryan Keberle returns home to Spokane 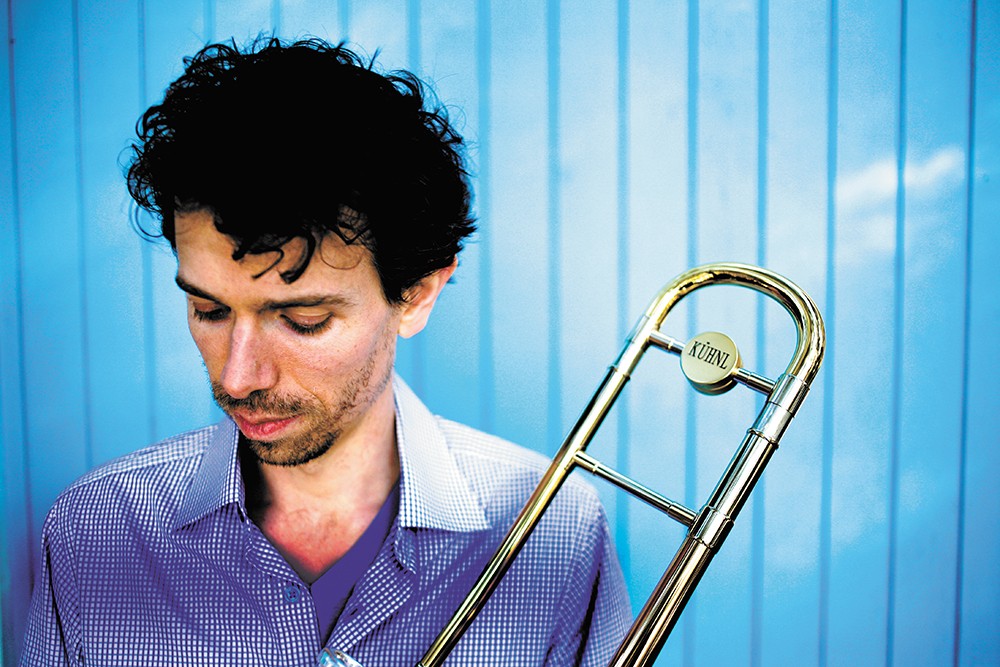 He picks up his trombone and suddenly nothing else matters.

Not the stresses of living in New York City, or an upcoming concert with a famous musician or a full day of teaching. Lips pressed to the mouthpiece, he blows into an instrument that's become almost an extension of his body. Through this trombone's multiple feet of tubing, Ryan Keberle produces the restless music he fell in love with while growing up in Spokane: jazz.

This weekend, for the first time since moving to the Big Apple in 1999 — where he would eventually go on to perform with jazz greats, play backup for Justin Timberlake and tour with Sufjan Stevens — the world-renowned player and composer comes back to his hometown headlining a concert with his modern jazz band Catharsis. They'll play indie-rock covers along with Duke Ellington, the Beatles, jazz standards and a whole array of long-form originals that the band has cultivated during its two years together. These are the fluid songs that make Keberle feel alive.

For reasons he can't understand, Keberle, 34, says the trombone came naturally to him after choosing it back in fifth grade.

"I had played the violin and piano for years prior to that, but the trombone just made sense," says Keberle, whose father Daniel Keberle is a jazz trumpeter and professor at Whitworth University.

After selecting his instrument, the next few years became a blur of attending school, lessons, Spokane Youth Symphony rehearsals and coming home to practice his trombone for hours "because it was always fun," Keberle says. John Coltrane fascinated him; he listened to the jazz legend's complex melodies and modes on heavy rotation. He'd jam with his father and local jazz musician and friend Brent Edstrom. But he had a mind for numbers too. Shortly before graduating from Mead High School, Keberle announced to his family he'd be an engineer. But after touring a California school he'd received a full-ride scholarship to, he told his father he wanted to be a jazz musician. With his parents' support, he moved to New York a year later.

"It's amazing I have any social skills at all," Keberle jokes.

The schools he attended for jazz studies are incredibly telling of his trombone prowess: the Manhattan School of Music and later the Juilliard School. But he says the best thing that came out of those programs were the contacts he made along the way. Since graduation, Keberle has made a living as a professional jazz musician (although he's also currently a music professor at Hunter College in Manhattan). He's played for movie scores and Broadway productions, performed with the Saturday Night Live house band and has recorded with David Bowie. Recently, he played trombone on the new Sufjan Stevens album Carrie & Lowell, but the track didn't end up making the final cut.

"I tried not to take it personally. Sufjan has finished hundreds of recordings that have never made an album," Keberle says.

Keberle says that star-struck feeling goes away eventually. For him, meeting one of his favorite jazz artists, pianist Brad Mehldau, was a much bigger deal than sitting in a tiny recording space with David Bowie.

"The thing that never gets old, though, is learning from these musicians," Keberle says sincerely.

In many ways, his band Catharsis (a jazz quartet without the piano) is his most personal project yet. He'd met all of the musicians through various gigs over the years, but when they first got together to play Keberle's compositions, things didn't click right away.

"It was frustrating because, as a composer, you imagine something and then they bring their own conception to it," Keberle says. "You have to let it grow into its own thing. And now we're completely comfortable as a band."

That math mind is still with Keberle when he's writing songs, helping him make sense of the complicated rhythms and harmonies he hears in his brain. But he says his pieces must include two important ingredients: groove and melody.

"The groove is not just what the drums are playing, but what everyone should be playing in. The better that feels, the more powerful the music is," Keberle explains. "And I've never been drawn to a song that doesn't have a strong melody. It's imperative for improvising off of."

Bringing a vocalist into the Catharsis fold was a big decision, but singer Camila Meza, a classically trained guitarist, has found her own role in the band. Sometimes she sings a wordless melody, other times a countermelody, which can be challenging to sing in tune.

"For her to have this instrumental background has allowed Camila to become just another player in the band. Not just the featured performer," Keberle explains.

"I'm proud to call my music jazz, but I hope it appeals to other audiences, too," he says. ♦