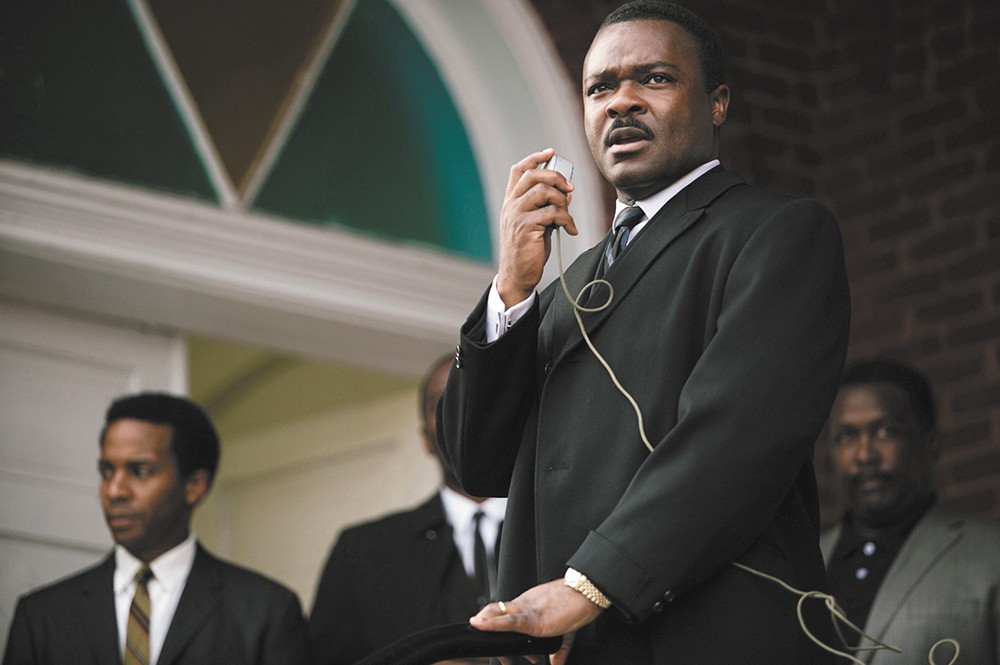 (David Oyelowo) in director Ava DuVernay's riveting drama Selma, it's in a context where we're already used to seeing him: He's delivering a speech. It's October 1964, and King is about to receive the Nobel Peace Prize, but he's not yet on a stage in that first scene; he's rehearsing that speech in a mirror. One of the greatest orators in American history is doing the thing that we don't always think about when we think about the greatest at anything in history: He's practicing, doing the unseen work that's essential before anything amazing can happen.

Selma could have been just an inspirational drama about a pivotal historical moment, and it could have been just a hagiographic portrait of King's efforts at promoting civil rights. But DuVernay and her team are interested in doing something much less common, something that echoes the similar success of 2012's Lincoln. They've chosen a single, crucial philosophical battle and shown us all the struggle, negotiation, strategizing, self-doubt, mistakes and intelligence that went into winning it. It inspires not with a tale of victory, but with an instruction manual for how to get there.

The narrative focuses on the efforts in 1965 by King, his colleagues in the Southern Christian Leadership Conference and other allies to secure voting rights for Southern blacks, whose in-name-only legal franchise was regularly thwarted by onerous state and local regulations. As they plot their strategy on the ground — focusing on Alabama, under the control of proudly racist Gov. George Wallace (Tim Roth), and planning peaceful protest marches from Selma to Montgomery — King also begins meeting with President Lyndon Johnson (Tom Wilkinson), hoping to find an ally but instead encountering a president with other legislative priorities.

Those conversations between King and Johnson form a vital center of Selma, but they're not the only places where the film wrestles with the best methods for achieving social change, and the timing for employing specific methods. In one crucial scene, King explains to local activists why a specific method of confrontation worked in Birmingham, where aggressive Commissioner of Public Safety "Bull" Connor ran the show, yet was not similarly appropriate in a different place. Later, when King chooses to turn away from a confrontation on the Edmund Pettus Bridge — where marchers had earlier faced a violent response from law enforcement — King's colleagues argue over whether they missed an important opportunity. Turbulent events do indeed play a significant role in Selma — DuVernay does not shy away from the beatings and other attacks the police inflict on protesters — yet the film is ultimately more concerned with the decisions that led to those events, and their ripple effect on later decisions.

It's also a fairly powerful portrait of King himself, precisely because it takes him down from the pedestal. Oyelowo's performance isn't merely an uncanny impersonation of specific cadences, but a look at someone determined yet flawed — we see him confronted by his wife, Coretta (Carmen Ejogo), over his extramarital affairs — and who understands his significance as the public face of the civil rights movement, especially when he makes a choice that may have been a mistake. Oyelowo's complex, layered performance helps make up for the less effective casting in a couple of other significant roles, particularly Roth's generally miscalculated decision to make Wallace a smug villain. Fortunately, Selma is too densely thoughtful the rest of the time to suffer much from that oversimplification.

Given recent racially charged incidents and protests in America, it was perhaps inevitable that Selma would be freighted with contemporary significance — which seems both somewhat unfair and deeply appropriate. DuVernay's film is too effective on its own dramatic terms to be reduced simply to an allegory for Where We Are Today, yet it's also tremendously encouraging for anyone who wonders if there's any hope for change. The film's tag line proclaims that "one dream can change the world," but that may actually do Selma a disservice. With every moment that shows King fine-tuning his speeches and sermons, it reminds us that having a dream is only a start. Somewhere along the way, even the most eloquent dreamers have to roll up their sleeves, and figure out the best way to do the work. ♦

Selma is not showing in any theaters in the area.