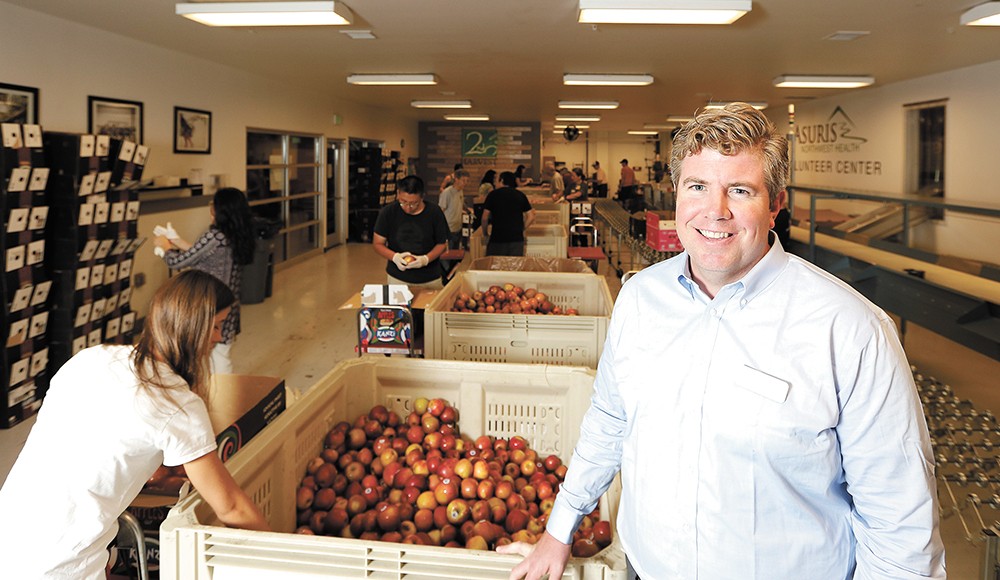 Young Kwak
"Food is so fundamental to people being successful in other areas of their life," Meuer says.

Nobody should have to go to school

or work or to bed at night with an empty stomach.

This doesn't seem like a particularly incendiary sentiment, but hunger is a daily reality for thousands of people: According to data provided by Second Harvest, 15 percent of Spokane County residents — and one out of five children — regularly experience what's known as food insecurity.

Drew Meuer is one of the people striving to make Second Harvest's mission to eliminate hunger a reality. He's been with the food distribution organization since 2009, working both behind the scenes and with the public, and as Second Harvest's chief development officer, he's involved in many of the organization's moving parts.

"Food is so fundamental to people being successful in other areas of their life," Meuer says. "It's just one facet of poverty. ... These things don't exist in a vacuum. Hunger doesn't exist separately from homelessness. There's all sorts of ways these issues are interconnected."

Meuer, 34, grew up in a Navy family that moved around frequently, though he spent most of his childhood on Whidbey Island. After attending Gonzaga University, where he got a degree in political science, Meuer taught English in South Korea for a year and eventually settled in San Francisco, getting a job through AmeriCorps as a direct service staff member at a low-income public school.

"That's when I really got into nonprofit work. One of the things I learned running an afterschool program was the connecting power of food," Meuer says, noting that kids generally performed better when they were fed healthily.

When he moved back to Spokane, Meuer says he applied immediately for a job at Second Harvest. He started out coordinating their food drives, and later worked as a driver of a mobile market truck.

"I was driving that truck four or five days a week," Meuer says. "I'd show up, load it up [with food], take it out to a school or church or community center. ... We'd distribute 8,000 to 9,000 pounds to 200 or 300 families. I got to see so many backroads and byways of Washington and northern Idaho. It was also in the heart of the recession, so we saw tremendous job loss and people losing their homes, a huge increase in the need for our services."

About a year and a half ago, Second Harvest CEO Jason L. Clark offered Meuer the position he currently holds.

"One of the things I appreciate most about Drew is the great balance he brings to thinking about tomorrow, while taking action today," Clark says. "We're trying to find the balance between feeding people today and helping build up their ability to be more independent and secure tomorrow."

The biggest project Meuer has thus far overseen is the transformation of the warehouse's frozen food sorting room into an on-site teaching kitchen. It now hosts regular cooking classes, during which an on-staff nutritionist teaches basic food skills — how to properly use a knife, for instance, or how to budget your weekly grocery shopping.

"We're really thinking through what's our role in helping to provide nutrition education programs and food literacy programs that help people live better," Meuer says. "We're starting to accumulate qualitative evidence that clients identify that as a benefit to the services that we provide."

Between its Spokane and Pasco distribution centers, which service 26 different counties in Washington and North Idaho, some 8,000 individual volunteers help out at Second Harvest each year. It's estimated that half a million pounds of food pass through the Spokane center's doors on a weekly basis, which will feed about 55,000 people in as much time.

Meuer hopes that his work with Second Harvest can bring a sense of stability to people whose home lives may be otherwise in disarray.

"I recognize there's so much more to be done, but that's the direction that I've pointed my life since then," he says.

Adds Clark, the nonprofit's director: "He's an amazing advocate for our mission. Everything he's done during his time here connects, in some way, with our work to help hungry people."

In the eight years Meuer has been at Second Harvest, perhaps the most invaluable thing the job has instilled, he says, is a sense of empathy.

"There are people [who] are really struggling that many people take completely for granted," he says.

"There's a huge gap between what some have and what others lack. If we can solve that one problem, even for just a short time, we feel that gives them a platform to be more successful in other areas."♦

I give back because... It's the right thing to do, and because I want to see our community thrive.

I look up to... My parents. The amazing staff and co-workers I have here at Second Harvest, and the volunteers, who tirelessly give their energy and time to improve the world.