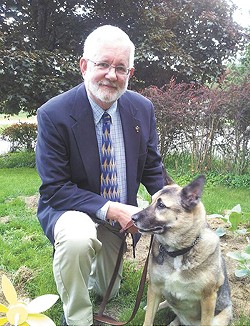 When the city of Spokane decided how to spend all the money it's making on marijuana sales,

it chose to pay for a police officer.

Appropriately, Officer Mike Roberge is tasked with marijuana and liquor enforcement. His salary and benefits are being funded by the approximately $120,000 in annual tax revenue being funneled from the state to the city from weed retailers within its borders.

"That's significant, man," City Councilman Mike Fagan says about the sum. "That's more money than a lot of people in my district make over three to five years."

For the past year, local governments have been getting millions of dollars from marijuana sales. But while pot advocates promised major windfalls if the drug were legalized, the revenues flooding into local coffers have been minor compared with overall budget needs.

Meanwhile, the state's used marijuana money to fund community health centers, mental health care, youth surveys and research programs for local universities. Much of the largess went into the general fund, where the state, controversially, spent a big chunk on K-12 education.

But even if the state spent the entire $164 million in projected pot tax revenue it's taking in this year on education, it would need about 10 times that to meet the type of basic education funding the Washington state Supreme Court says is constitutionally necessary.

Spokane Valley, for its part, spends more on its senior center than the estimated $75,800 a year it brings in from marijuana. Spokane County's nearly $443,000 for marijuana tax revenue this year isn't exactly loose change, but it's practically budget dust when considering the size of the county's public safety budget — more than 270 times larger.

"The state is keeping most of the revenue," County Commissioner Shelly O'Quinn says. "It doesn't translate into big money for local government."

The figures, however, are growing. As the number of pot retailers increase, the state is expected to take in more revenue. By 2019, the Washington State Liquor and Cannabis Board estimates, the amount of pot revenue will have doubled.

This year, the amount of revenue distributed to cities and counties was capped at $6 million. But next year, that's skyrocketing up to $15 million.

The legislature has stressed the money for local jurisdictions was intended specifically "for public safety purposes and to facilitate the ongoing process of ensuring a safe regulated marijuana market in all communities across the state."

For some cities and counties, like Spokane, that meant earmarking the money for specific programs. In Spokane County, however, the revenue simply went into the general fund.

Cities and counties only get tax money if they allow marijuana to be sold in their jurisdiction. The more weed a city sells within its borders, the bigger chunk of the state tax revenue they get. Ban it, and they get nothing.

It's a conundrum for a penny-pinching city like Spokane Valley. There are three recreational marijuana retailers in Spokane Valley, City Councilman Ed Pace says, and the city council has so far voted to keep the number capped at three.

Pace says he was torn. He's libertarian, but says many of Spokane Valley's conservative residents don't consider marijuana to be in line with the Valley's "family friendly" mission.

As the revenue from pot grows, there's another worry as well.

"I have concerns about the state or local economy becoming addicted to marijuana revenue," Washington state Sen. Michael Baumgartner says. He points to state Rep. Hans Dunshee, whose committee let die a proposal to raise the Washington state cigarette smoking age to 21.

Why? Because Dunshee argued that doing so would mean fewer smokers and fewer smokers mean less tax revenue — at least $10 million a year less. ♦

Approximate share of pot taxes the city of Spokane is receiving