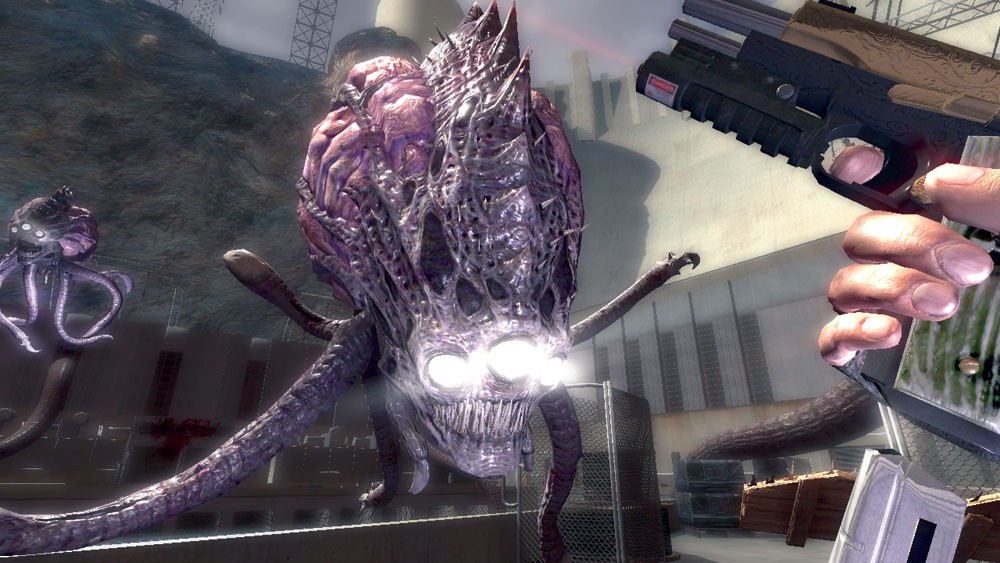 Too bad the game isn't as smart as the octobrain

Duke Nukem Forever has finally appeared, more than 15 years after Duke Nukem 3D. And I’m not sure what annoys me more: That I waited for the game, or that I paid $65 for it.

Most shooters feature battles with supreme foes — bosses — that are more difficult to defeat than other enemies. In the best games, these foes are not just bigger and stronger, but they fight more intelligently than their minions. They know all the best tactics, and combine the different characteristics of the enemies I’ve been battling during the rest of the game. They’re like final exams.

In Duke Nukem Forever, the bosses can only be killed with a turret gun — a big mounted canon that I aim and shoot from a single vantage point. This happens periodically in a game in which the point is to run around a virtual 3D space shooting at my enemies. The sudden shift from 3D to 2D battling is jarring and absurd. It’s not like an exam — it’s like graduating from college only to go back to preschool.

This is perhaps the most disappointing feature in a game whose franchise was built on exploiting the combat possibilities of three dimensions. Although Duke Nukem 3D wasn’t exactly a 3D game — the characters were flat pixelated images with no real depth to them — it was close enough to give players the sensation of navigating a virtual space. It made videogame combat feel tactical and alive.

Even livelier was Duke’s personality. Instead of being a grim, humorless grunt soldier — the same kind that fills 95 percent of all combat games — Duke was a witty trash talker. I still quote him: “It’s time to kick ass and chew bubble gum, and I’m all out of gum.” The new Duke sounds like he’s smoked his way through the past decade, and he doesn’t say anything nearly as memorable as before, so I’ll just forget to quote him here.

And the new Duke moves with less grace than his former flat self. Seeing Duke walking in Duke Nukem Forever is like watching a store mannequin being carried around. His co-stars are equally lifeless. Duke Nukem Forever looks as though it were made a decade ago, shelved and forgotten, then dusted off and released. This isn’t Duke — this is dated.

THE GOOD: It took something like five different game development companies to make this game. I’ll refrain from naming them, or even fact-checking the number of them. Suffice it to say that they will all be laughingstocks for the next little while. They richly deserve it.

THE BAD: The number of jokes about how long this game took to make — it’s listed in The Guinness Book of World Records for longest development time — will now be replaced by jokes about how bad the game is. Really, Duke Nukem Forever should never be mentioned again.