Sacha Baron Cohen loses his edge in The Brothers Grimsby 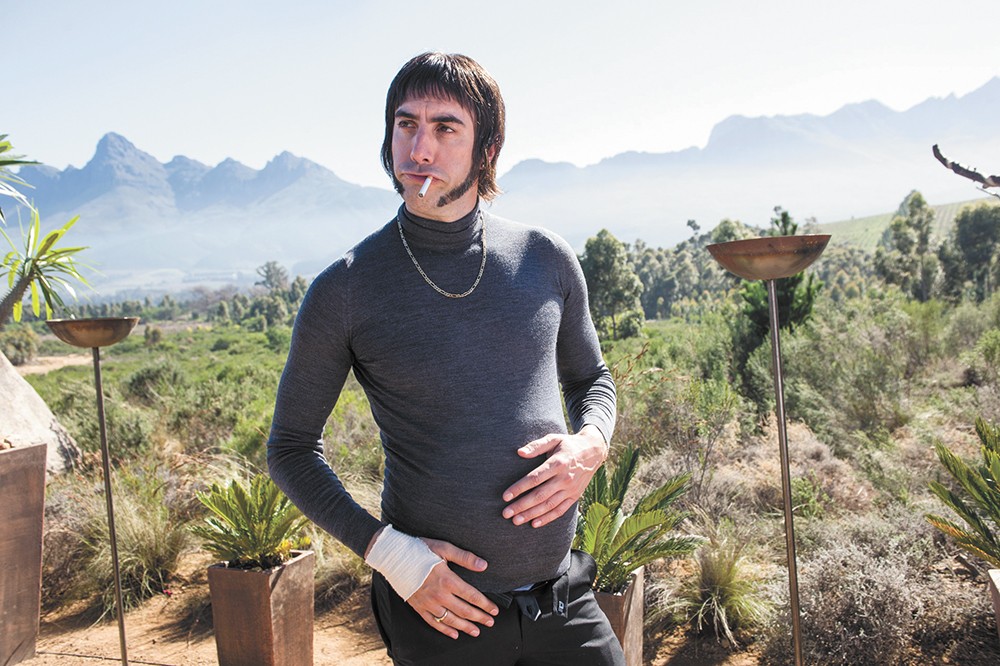 racism, and sexism as worthy of ridicule. Seven years ago, in Brüno, he held up straight men's gay panic as deserving of derision. The fearless cultural critic that Baron Cohen once was would be appalled by the crass viciousness of The Brothers Grimsby. He has made himself the target of his former self with a witless action "comedy" that embraces the lowest forms of cruelty and bigotry, that wallows in anti-intellectualism, that celebrates bashing the poor as good fun.

The Brothers Grimsby is a soul-crushing experience not only for what it is, but for what it represents about the downfall of a comic who previously displayed genuine creative genius; Baron Cohen circa Borat would be dismayed at the glee with which today's version invites us to laugh at his portrayal — as star and cowriter — of Nobby Butcher, who doesn't work, has 11 kids, and proudly announces the welfare scams that bring money into the household. That Baron Cohen might have held up for ridicule the one-percenters who reduced Nobby's hometown of Grimsby — a working-class city in the north of England — to a post-industrial hellscape, but here it is only the unemployed poor who come in for abuse: they drink too much, have too many kids, and are generally disgusting slobs living the high life on the government teat. (Here's another movie, along with London Has Fallen, that Donald Trump fans will love.)

But even after holding up Nobby as a happy yet revolting moron, Grimsby expects us to feel something akin to tenderness for him when he finally finds his long-lost brother, Sebastian (Mark Strong), who was adopted separately when they were orphaned as children. Sebastian is now a top agent with MI6 — smart, sleek, supremely competent, the precise opposite of Nobby — but we cannot feel much generosity toward him either: even after Nobby has ruined one of Sebastian's ops, injured the agent, and has even done some idiotic things that threaten world peace and stability, Sebastian still hasn't run away in the opposite direction.

Any attempt on the movie's part to create authentic brotherly feeling between the men is missing. In its place, we have a thoroughly fatuous spy sendup as Nobby tags along on Sebastian's mission to stop a fiendish plot to kill millions. And that is subsumed to endlessly drawn-out scenes of penis panic — a new subset of gay panic that Baron Cohen appears to have newly invented — that are designed to engage the viewer's presumed revulsion rather than pity it (as Baron Cohen would have done 10 years ago). Grimsby presumes the viewer will agree that fat women — not just Rebel Wilson as Nobby's wife, but in a truly vile sequence, Gabourey Sidibe as a hotel maid — are gross, and the fact that Nobby finds them sexy is hilarious. After all of this, we will be invited to consider that the very people Grimsby has offered up to us as poor, dumb, and good for absolutely nothing are in fact the essential foundations of society. The movie itself doesn't even seem to buy it.

Grimsby is lazy, cheap, lurid and stupid. It is painfully unfunny. Worst of all, it's pointless. It's so short — well under 90 minutes — and feels so endless. I don't know how Sacha Baron Cohen found himself in this place: there may be a tragically sad story in that. But there can be no excuse for this movie. ♦

The Brothers Grimsby is not showing in any theaters in the area.

Based on a powerful true story, Just Mercy examines racial injustice within the American legal system

You might feel anxious watching Uncut Gems, or you might simply be annoyed by one man's bad decisions