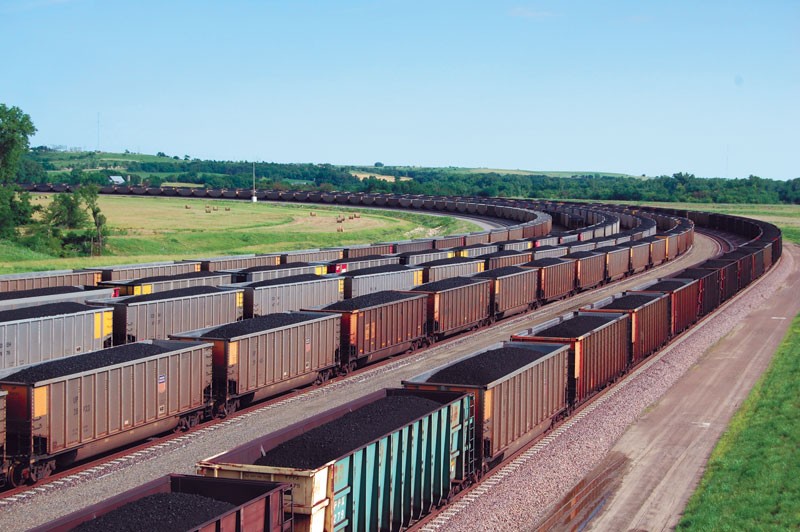 Colin Nederkoorn
Some studies estimate that each coal car loses as much as 500 pounds of coal and dust — more than 30 tons per train per trip.

There’s a stretch of road on Highway 200, as it nears the Idaho-Montana line in rural North Idaho, where the biggest traffic hazard is tourists parked on the side of the shoulder snapping pictures.

It’s there that the narrow ribbon of asphalt climbs from the muddy flats of the Pack River Delta and winds its way up onto the toes of the Cabinet Mountains. From that vantage point, the huge southern sweep of Lake Pend Oreille can be seen, and the view can be just as distracting as the idling roadside motorists.

Like most scenic vistas, almost everybody’s pictures look the same, and it’s a safe bet that any panoramic shot taken down Pend Oreille’s northeastern shoreline will not only include water, trees and islands but a freight train chugging down the tracks that run along the water’s edge.

And now, through a confluence of global forces, those vacation snapshots could come to include a whole lot more trains — trains laden with car after car filled with coal.

While climate-change concerns have prompted a national cold shoulder toward king coal in the United States, the ravenous industrial engines of the Pacific Rim and India have lost none of their appetite for combustible fossil fuels.

The U.S. Energy Information Administration noted that coal exports from the United States to Asia grew 176 percent from 2009 to 2010 — 17.9 million short tons worth. The stream of coal flowing from American mines to Asian industry is so great that, if left unchecked, world coal consumption will actually increase by 2030, and 90 percent of that consumption will be attributed to China, which burned 125.8 million tons in 2009 alone.

With a shaky domestic market, mining giants are looking to cash in. The new boom is centered on the Powder River Basin, which straddles the Montana-Wyoming border southeast of Billings, Mont., and is home to one of the world’s richest deposits. Now the firms involved want to build a new shipping terminal near Bellingham for transporting the coal once it has been hauled by train through Sandpoint and Spokane.

When looking at a map of rail lines in the western United States, one is struck by two patterns. The web of tracks fan out from the Midwest and converge into two dense choke points. One in Salt Lake City, a vast hub for the Union Pacific Railroad, and the other in the Idaho Panhandle — smack dab on Sandpoint, where not only UP but Burlington Northern- Santa Fe and the much smaller Montana Rail Link meet before hitting the central rail yard in Spokane, and heading west and south.

They call it “the funnel” for good reason. About 50 trains, and sometimes as many as 70, travel through Sandpoint every day. The blare of horns is so commonplace that locals don’t even hear them; commuters habitually plan to be stopped at any of the more than 160 rail crossings located in Bonner County alone.

Should the coastal terminals open and coal shipments ramp up to meet an export market of 110 million tons per year, estimates suggest that rail traffic would need to increase by about 40 unit trains — some more than a mile-and-a-half long — traveling to or from the ports every day.

Along with that traffic would almost certainly come increased diesel emissions, wear and tear on the rail infrastructure and congestion, though officials with BNSF maintain the line through Sandpoint and Spokane has more than enough capacity to handle the traffic.

What really has environmental groups worried, though, are threats to air and water quality from the loads themselves. “Exporting Powder River Basin Coal: Risks and Costs,” a September 2011 analysis by the Western Organization of Resource Councils, estimates that each coal car loses as much as 500 pounds of coal and dust, amounting to more than 30 tons per train, during each trip. In the case of North Idaho, where the BNSF tracks run for miles along the northeastern shore of Lake Pend Oreille, that alone is starting to raise a ruckus.

“We’re worried about are the impacts to the lake,” says Shannon Williamson, who heads the Lake Pend Oreille Waterkeeper organization. “The coal dust is quite significant, and when it flies off, it goes into the surrounding land and water. What’s worse, if there’s a derailment, it would be catastrophic. It would be horrific — like an oil spill.”

The railroads say they are taking steps to reduce the dust. “Starting Nov. 1, we’ve taken measures to reduce coal dust,” says Texas-based BNSF spokeswoman Suann Lundsberg. “What we’ve said is, ‘Shipper, you need to reduce your coal dust by 85 percent.’”

That is being accomplished by a request that coal loads be packed in the shape of a bread loaf to keep material from blowing off the sides. Still, loads are not required to be covered — it costs time and money to do so — and without sealing the cars, it’s inevitable that particulates and even chunks of coal will come loose.

A group of doctors in Bellingham opposing the new terminal have reviewed the research on the health effects of coal dust on humans, and they found that coal and coal dust do pose an environmental and health danger no matter how far from the “origin location” they travel.

Lundsberg dismisses their study. “You can’t really compare health risks of miners with coal dust coming off of a car,” she says. “Where we have coal dust problems are in the Powder River Basin. We’ve never had a complaint in Washington state.”

Groups like the Pend Oreille Waterkeeper, Spokane Riverkeeper, Sierra Club and Power Past Coal are mounting an organized resistance to the new shipping terminal.

“Cities along the coal rail route like Bellingham, Edmonds and Spokane, are waking up,” says Crystal Gartner, associate field organizer for the Sierra Club in Spokane. “They’re concerned they don’t have a say because they’re out of the scope of the study. It would be worse for Spokane because all the rails go through here, yet we have zero say in what happens.”

And there’s still the larger worry over the impact of burning that much coal anywhere in the world. According to figures cited in Science Daily and quoted in the WORC analysis, the export of 20 million to 30 million tons of Powder River Basin coal would result in putting of between 35 million and 53 million tons of carbon dioxide into the atmosphere every year.

With the filing of a formal application for the Cherry Point Terminal near Bellingham in April, and the EIS process now underway, the issue could be on the public radar for some time to come.

“Spokane, Sandpoint and other cities along the rail line will see nothing but harm and no benefits from Big Coal’s massive coal export proposal,” the Sierra Club’s Gartner says. “We can’t trust the railroads or the coal companies to protect our communities.”